I'm in the final week of what has been a pretty unusual school/work year. At the beginning of it all, back in September, I had set a goal for myself to reach 100 days of riding to work for the year.

This past spring has not exactly been cooperative, weather-wise, what with lots of rain - and even snow in April (!) - to where I was starting to worry I might not reach my goal. But today, with just a few days left to go, I hit 100 days. 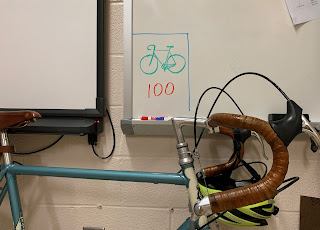 I anticipate that I'll be able to ride a few more days before week's end, which should give me a bike-to-work average of 64 - 65%, depending on how many more days I can squeeze in.
The fact is, 100 days would be pretty respectable in any school/work year (usually August through May, but because of the COVID pandemic, this year was September through June) but this year it works out to be even better because we had a shutdown for most of December and January. During that time, we were engaged in "remote learning" and I was basically teaching from my living room. Those are almost never good months for riding a bike in Northeast Ohio, but since I was working from home, the days didn't count for or against me. The result is that my overall numbers might be a bit lower than what they could have been, but my average held up through the worst of the winter. Once we returned to our regular work schedule in late January, my average started falling (as it always does in the winter months) - from 72% before the shutdown to 64% by the end of February.
I've held a steady average of about 64% since then, which has actually been frustrating. I kept hoping to increase my average through the spring, but between the uncooperative weather and various commitments that made driving necessary on some days despite the weather, I just couldn't do it.
So, how does this compare to previous years?
This has been the 9th year that I've been riding regularly to work. In that time, it has been a long-term goal to do at least half of my commuting by bike. I have met or exceeded 50% in 6 out of the last 9 years.
My best year was 132 days, 76% (2017-18).
My worst year was 61 days,  35% (2014-15)
This year, at 64-65%, will rank as my second-best.
While I anticipate adding at least a couple more days to this year's total, I can do some easy calculating that 100 days at 28.5 miles per day is 2,850 miles. My car (VW wagon) averages around 28-29 mpg in mixed driving, so we can also figure that I probably saved around 100 gallons of gas in the past year, which at current prices (about $2.80/gal) comes out to around $280 that I didn't spend on gas.
As of today, my combined numbers for the past 9 years are 840 days (out of 1523) for a long-term average of 55%. That's 23,940 miles, and a savings of roughly 840 gallons of gas, and somewhere around $2300 in fuel cost savings.
Some pictures from the past year: 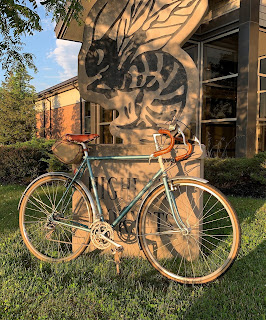 A beautiful morning for day 100. I decided to leave the black commuting mule at home and ride an old favorite for the occasion. There's rain and a possible thunderstorm in the forecast for the afternoon, but I just had to risk it. The morning was just too nice. 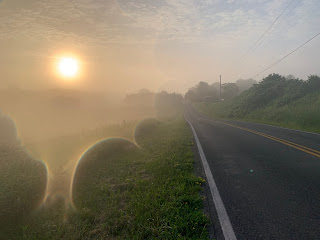 A misty morning in early June. There must have been some mist/condensation on my lens, giving this crazy flare effect. A ruined photo - or what Bob Ross would call a "happy accident"? You be the judge. 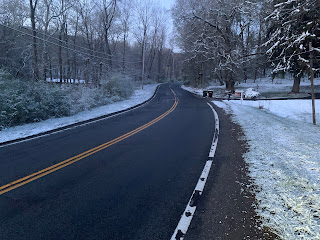 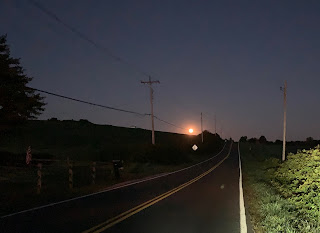 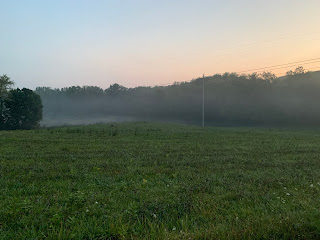 A misty morning in September.

The forecast for the next few days looks good, so I'll add to my totals and post an update soon. That's all for now . . .