The Simpleton's Guide to Simplex: SLJ 5000

The following contribution, from special guest blogger Robert "Simplex Simpleton" Broderick, of Velo-Pages.com, is a fresh installment from his "Simpleton's Guide to Simplex" -- not available in bookstores or online merchants, but first promulgated to the Classic Rendezvous group and available "free-to-anyone-inclined-to-read-this-drivel" (. . . this, in his own words). It is the first-ever "guest blogger" article posted to the Retrogrouch Blog.

The first of the highly esteemed Simplex SLJ (. . . or Super Lucien Juy) series rear derailleurs, originally but briefly known as the Prestige Super L.J. debuted in 1972 as the SLJ AR 615, which was subsequently superseded by the almost-the-same-but-not-quite SLJ 5000 coincident to model year 1975.  The change in nomenclature was begot of Derailleur le Simplex having decided to undertake a wholesale overhaul of their derailleur model designations principally because they had begun to proliferate said model lineup to a point where their previous part numbering scheme could no longer properly provide a descriptive context (. . . as if it ever did in the first place).  The resulting reformulation of model numbers was intended to result in assignments that clearly articulated (. . . pun intended) the specifics of a given derailleur component . . . ASSUMING that one had the corresponding cipher key.  As previously discussed in CHAPTER IX - POST 1974 SIMPLEX DERAILLEUR CODES (. . . i.e., Taking a Swim in the Alphabet Soup) the Rosetta Stone explanation of Simplex model numbers dating from said era would be as follows:

1 - Refers to the type of derailleur (simple back-and-forth movement vs. parallelogram) and defines place of model in the product line.

2 - "A" designation indicates that unit is a front derailleur (. . . the "A" being a reference to the French word avant, which not surprisingly translates to front in the English language).

4 - Type of actuating cable for SX and SLJ equipment only, whereas:
"0" - Indicates cable with outer casing.
"2" - Indicates bare inner wire only.

1 - Refers to the type of articulation and defines place of model in the product line.

4. Mounting specifications, whereas:
"P" - Employs a mounting bracket.
"SP" - Mounts directly onto fork end without use of a separate bracket.

Having established this wonderful convention, Derailleur le Simplex promptly went about wantonly violating same over the subsequent years with various product offerings (. . . albeit, primarily lower-end models -- but the inaugural SLJ A 500 pre-CPSC front derailleur also does not quite conform to this paradigm).  Therefore, the aforementioned guide should be considered a general rule of thumb and NOT a rigid and inflexible document (. . . unless you want to drive yourself stark raving mad).

As a direct consequence of the aforementioned part numbering re-alignment, it logically followed that contemporary Simplex catalogs identify discrete individual piece part numbers for those bits comprising the original SLJ AR 615 versus the first edition SLJ 5000 rear derailleurs and that said numbers are to some extent unique. However, those very same respective parts remained essentially unaltered from one model to the next, and in fact are almost completely interchangeable with one another -- at least until the second edition SLJ 5000 or if you prefer SLJ 5001 of model year 1978 (. . . in other words, Simplex may have changed the part numbers in name, but not the physical parts themselves). Exploded diagrams for these earliest SLJ offerings can be found as follows (. . . all diagrams reposted herein with acknowledgement to their host source at Velo-Pages.com): 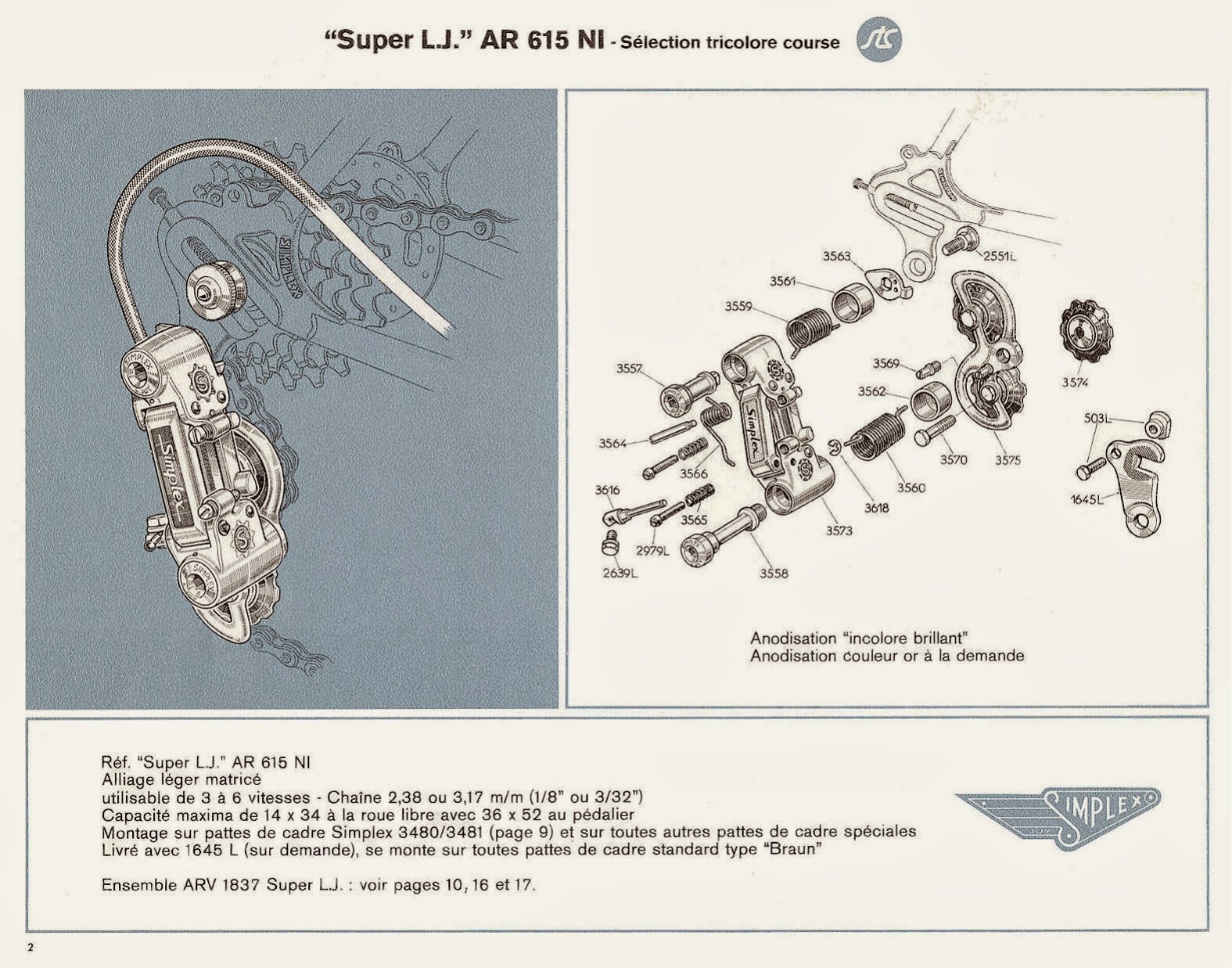 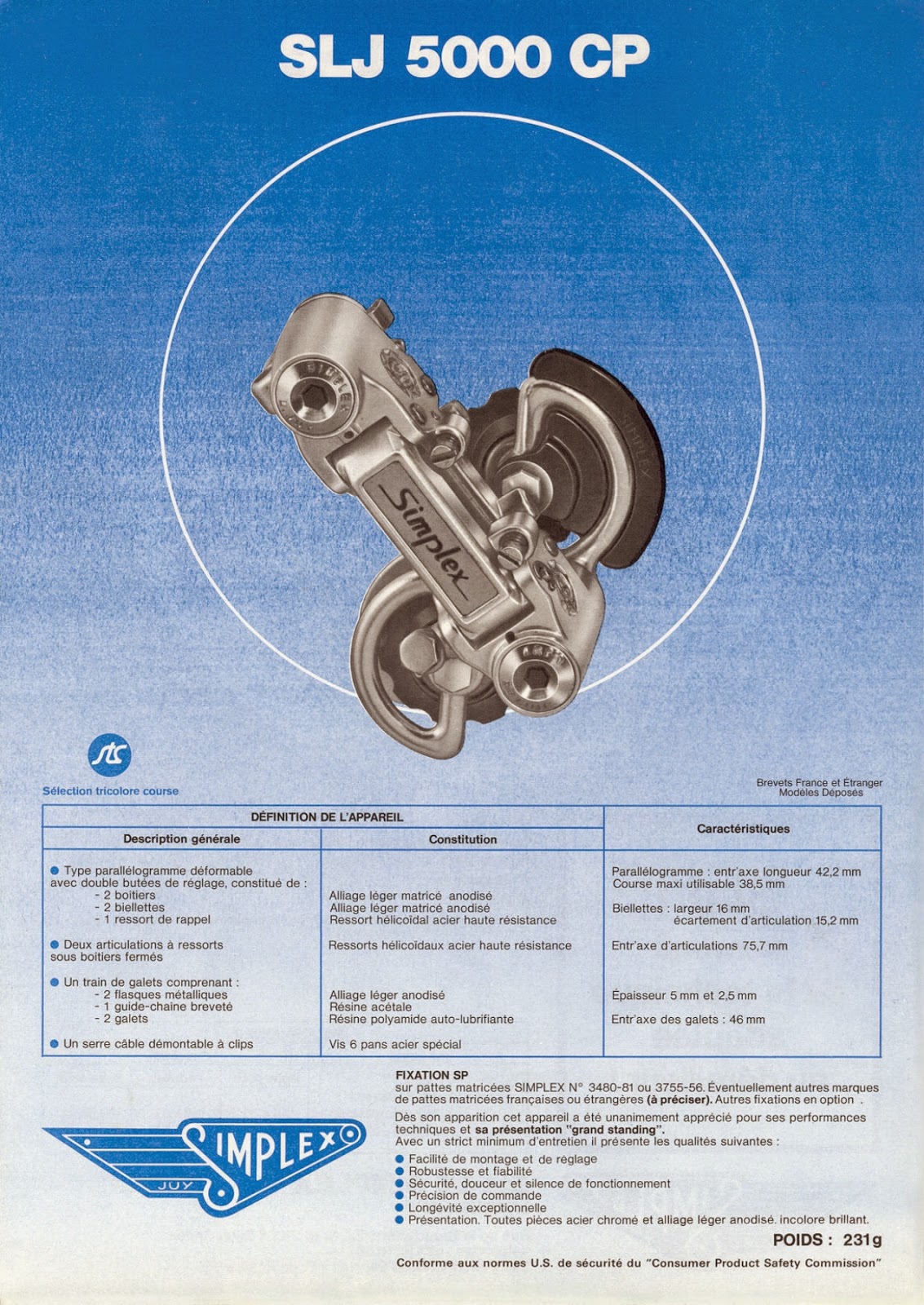 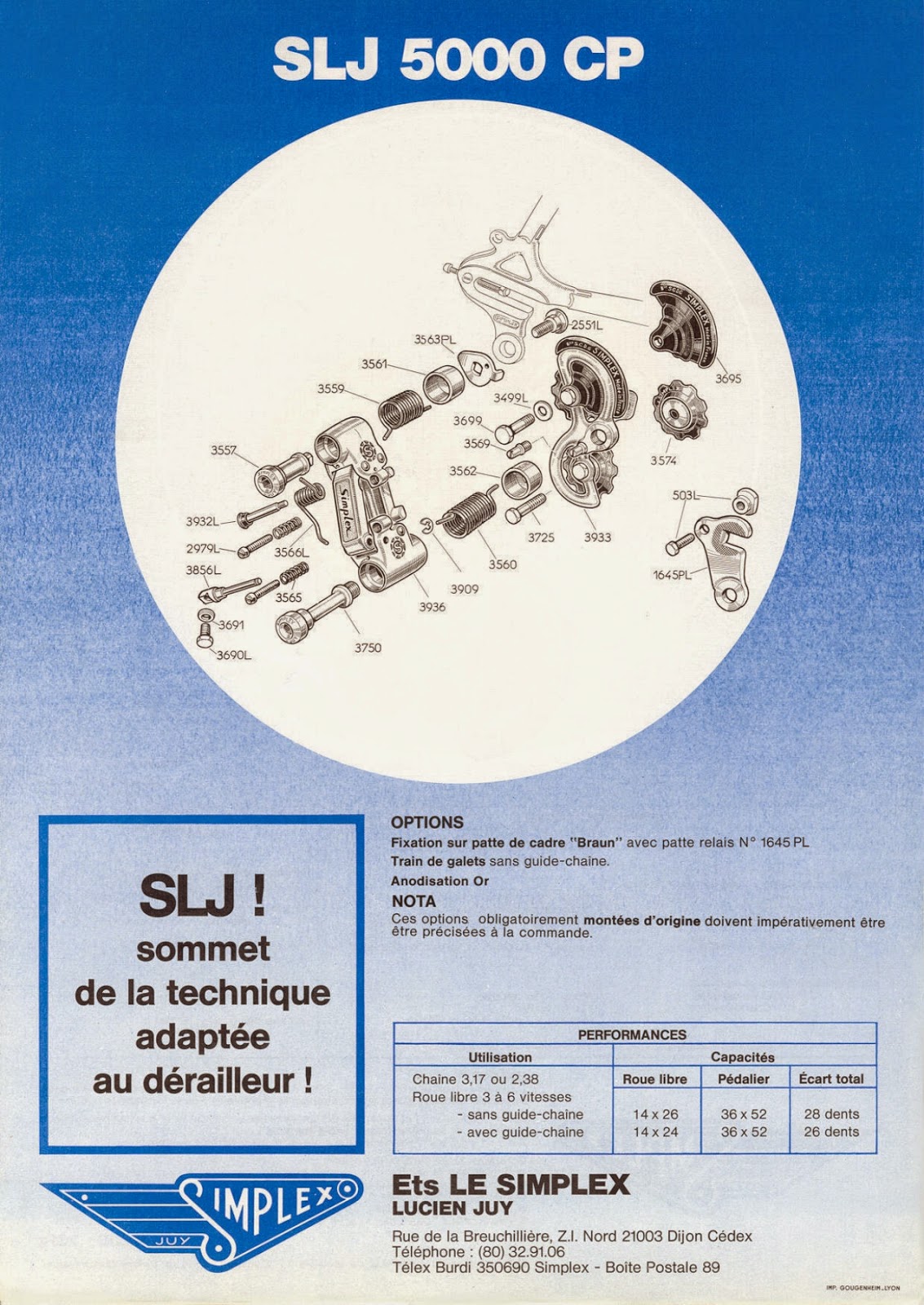 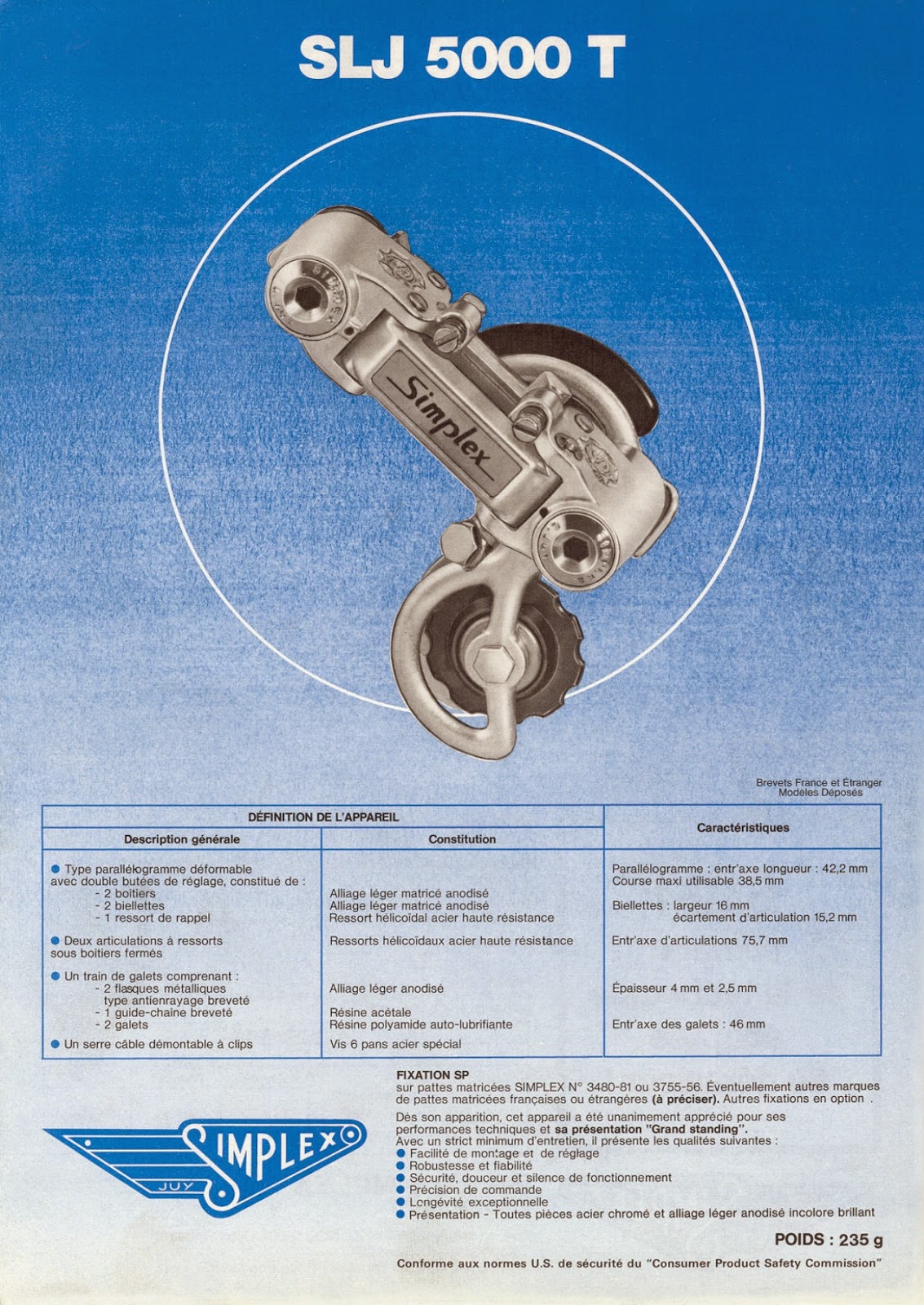 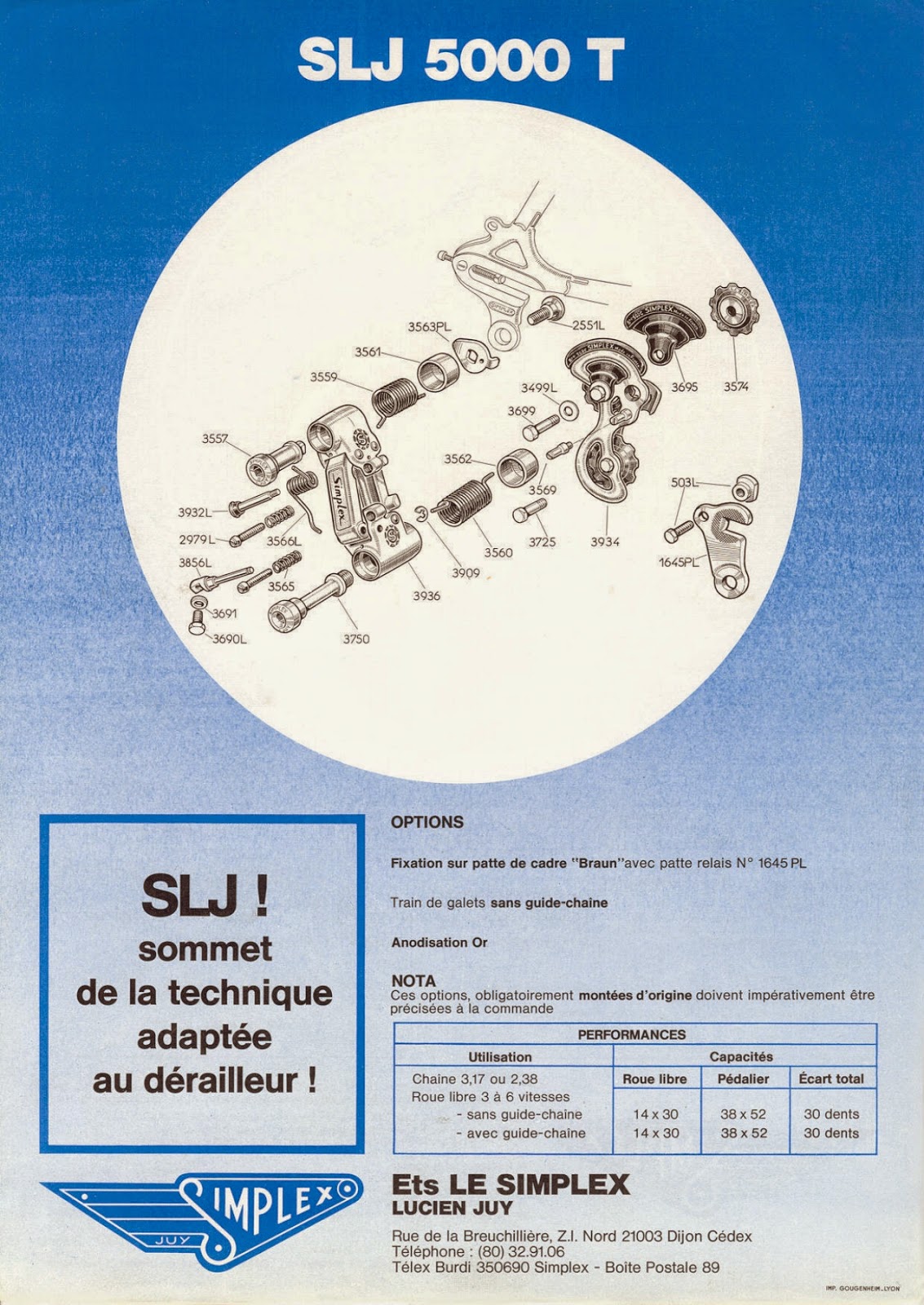 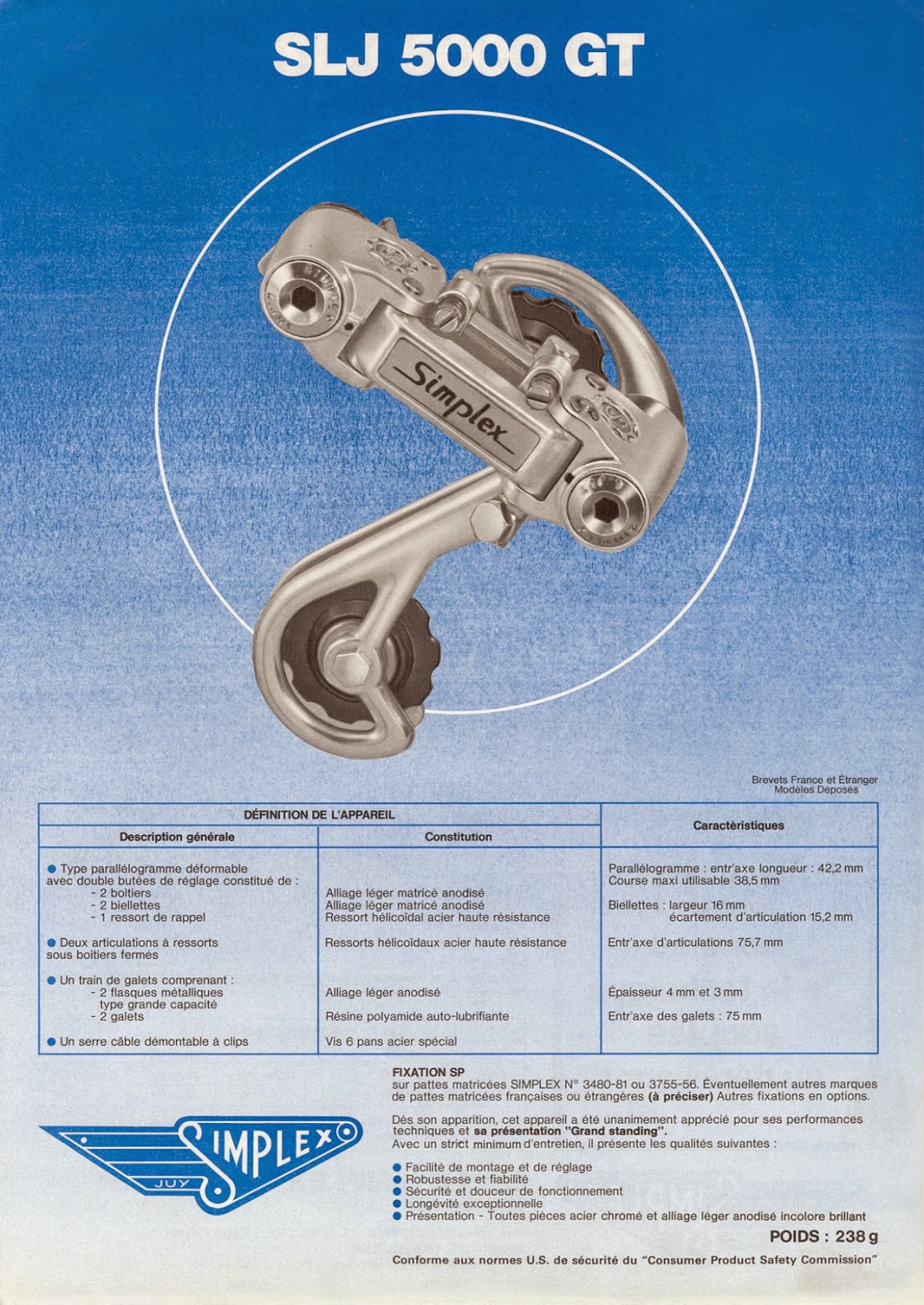 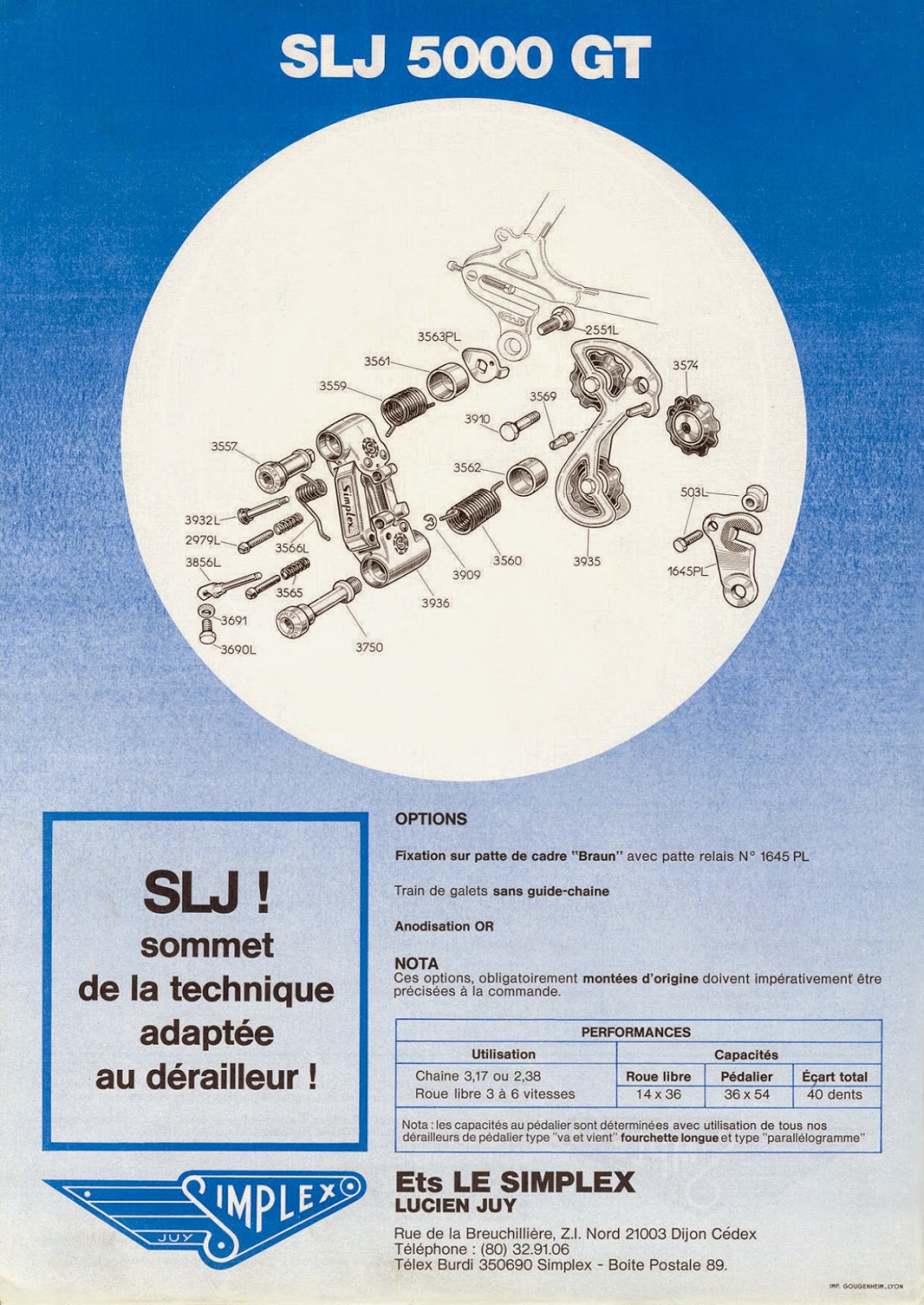 Over the course of its product life-cycle (. . . yep, another of those cursed puns), from inception in 1972 as the SLJ AR 615 through 1979, after which it was superseded for model year 1980 by the yet again remarkably similar but slightly improved SLJ 5500, the SLJ 5000/5001 rear derailleur underwent a few minor production modifications along the way.

With regard to the new book Derailleurs of The World –Simplex, while I wholeheartedly commend the author for undertaking such a daunting task and roundly congratulate him on a job “well done,” as with most things in life including many of my own endeavors, there is room left for improvement in my humble opinion. Sticking strictly to the topic of the SLJ 5000/5001 series rear derailleur and its precursor, the SLJ AR 615, there are but two variations which are documented therein – an original SLJ AR 615 and a  third edition SLJ 5000 CP or second edition SLJ 5001 CP (. . . depending upon your perspective – are you thoroughly confused yet?). I could quibble with the production dates cited, but I am of the opinion that any such discrepancy from my own understanding of “The Truth” is likely begot of the author’s omission, be it intentional or otherwise, of both the first edition SLJ 5000 as well as the second edition SLJ 5000 or first edition SLJ 5001.  My final oh-so-narrow critique of this fine book (. . . no sarcasm intended here – if you have any interest in refining your own knowledge regarding the oft perceived byzantine labyrinth of Simplex product offerings, this is the best, most concise place to start by far) would be that for whatever reason (. . . and there are many about which I could speculate and probably sympathize myself were I in his position of actually publishing a physical “book” as opposed to merely positing my punditry in dribs and drabs over the years) the author chose to omit pictorial evidence of anything other than the CP or “racing” version of these derailleurs (. . . an oversight which leads to circumstances such as persons inquiring as to why their third edition SLJ 5000 or second edition SLJ 5001 rear derailleur has such an apparently odd pulley cage assembly when compared to others they might have seen like the one in the book, and that would likely be because it is an SLJ 5000/5001 T as opposed to the close-ratio-oriented SLJ 5000/5001 CP – same derailleur body, same internal springs, same pulley wheels, same size or length pulley cage assembly as opposed to the ginormously long cage GT version, but said assembly has slightly different cage plates which are offset to one side and positioned at a different angle so as to facilitate greater chain wrap).  To be fair, at least the author has included a titular reference to the CP versus T versus GT models, but absolutely no pictures nor even a brief description as to just what differentiates each variation from one another.

Finally, we now get to the crux of a common query regarding a particular affectation of the Simplex SLJ 5000 rear derailleur, specifically with respect to the treatment of its cable stop. It is in fact, this very question that calls attention to the principal variation which defines not only the difference between the original SLJ AR 615 and its remarkably similar SLJ 5000/5001 successor, but also all three of the production versions of the SLJ 5000/5001 itself which occurred from 1975 through 1979. I have taken the liberty of attaching to this already lengthy missive a series of four photographs which can be used by those playing along at home to (. . . again, hopefully) differentiate each successive model: