You come to stop at an intersection and there's a line of cars already stopped for the light? Do you take your place in line and wait, or filter your way up on the curb side to get to front of the line?

The question brings up one of the many points of tension between drivers and cyclists -- and the response even divides the cyclists. At the risk of getting a firestorm of comments, I'm wading into the debate.

A lot of riders think nothing of moving to the front. After all, cars don't hesitate to pass us when they have the opportunity, or even when they really shouldn't, so what's wrong with passing them back when we're able? Not only that, but I know many cyclists will argue that they're safer at the front of the line when the light changes. Cars see them, and they're less likely to get "hooked" by cars turning in the intersection. 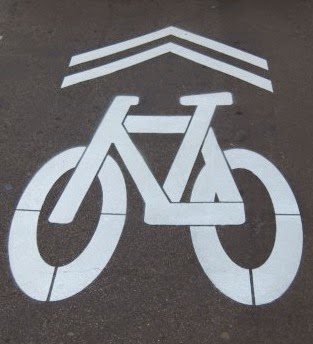 As for the safety aspect, it seems to me that it's a debatable point. I know there is much evidence that says intersections are some of the most dangerous places for cyclists, so I don't dispute that. On the other hand, I don't know of much (if any) evidence that shows a cyclist is any safer at the front of the line as compared to one who takes his place in the lineup and observes good lane placement. In addition, there are other problems (in terms of both safety and the law) with filtering up the curb side to the front of the line.

If reader's can't tell yet, let me just make it clear now that I don't advocate filtering to the front in normal traffic. When I get to an intersection, if the light is red I take my place in line, and I take the lane. There are a few reasons I do it this way.

In general, it seems to me that most of the time we as cyclists are safest when we observe the laws that are in place for cars and other traffic. What does the law say about passing slower or stopped traffic on the curb side? Well, it depends on the state, and the wording of the laws can sometimes be a little vague or confusing, but in many of them, passing on the curb side isn't permitted under most circumstances. So if the rider does end up in an accident and gets injured, he/she could be found to be at least partially at fault.

Beyond the legal ramifications, there are some safety concerns from passing on the right. For one thing, drivers don't expect to see cyclists passing them on the right, and the visibility is poor, so there's a good chance that the cyclist will be unseen. Then, if there are other intersections -- not just other side streets, but also parking lots and driveways -- there is a real danger of being hit by cars entering or exiting the main roadway. Not only that, but if there is on-street parking, riding up the right side of the traffic can put a rider into the "door zone." All of the above can lead to a dangerous situation.

Then, there's just the irritation factor. The way I see it, most drivers only grudgingly share the road with bicyclists as it is. Encountering us on the road is, for some motorists, a major pain in the ass, and for some it's a stress they'd rather not deal with. They don't like having to slow down to wait until it's safe to pass, which is why so many will try to squeeze by us even when it really isn't safe to do so. Their impatience and sense of entitlement to the road take over, and they think nothing of putting us at risk to avoid even a few seconds of delay. So, when I get to a red light and there are a bunch of cars stopped there, it's an awfully good chance that most of them already passed me once within the last mile or two. The last thing they want is to see me slip on by them to get to the front of the line, making it so they'll have to pass me again right after we get through the intersection. To my mind, that doesn't really help me, either. I'm just going to get passed again by the same cars that passed me a short time earlier, and this time they may be even less patient than they were the first time.

I figure that if the cars are ahead of me at the light, I'm just as well off to leave them there and take my place behind them. At the same time, I expect cars that arrive at the light after me to wait their turn behind me in the same way. I take the lane to discourage people from attempting to pass me as we approach the intersection -- thereby minimizing the possibility for a right hook. And I place myself in the lane for the maximum visibility to oncoming traffic to prevent the possibility of a left hook. It also helps to develop a good sense of anticipation for what other cars around me are doing, or what they might be intending to do. I don't know if cars have "body language" or if it's some kind of sixth sense, but an observant cyclist can often anticipate potential danger.

When I'm approaching an intersection, whether there's a stop sign or a traffic light, few things raise my ire more than cars trying to pass me just so they can come to a stop directly in front of me instead of behind me. In fact, I don't want people passing me through intersections at all. That is impatient, aggressive behavior that puts me at risk, and also puts at risk any oncoming traffic that may be coming through the intersection. Often, I will take the lane on the approach to the intersection to discourage that from happening. Some cars will try to pass anyhow, at which point I usually give them a piece of my mind. Now, it becomes difficult to convince a driver that they pose a danger to the cyclist by passing at the intersection when that driver sees cyclists passing to get to the front of the line. Of course there is a difference in risk -- the self-imposed risk of passing a line of stationary cars vs. the moving car trying to squeeze past the cyclist -- but try to explain that to a driver.

Is there any time a cyclist can pass on the right? Again it depends on the state and local laws, but in many places, the cyclist can pass slower moving (or stopped) cars on the right if there is a designated bike lane (some bike lanes -- like those of the green-painted variety -- even include a "bike box" at the intersections where riders can move ahead of cars). Still, much caution is still advised. Visibility is still an issue, and a bicyclist can be hidden from view by the cars. One still needs to be well-aware of the other traffic, and keep an eye out for cars that may suddenly pull into the bike lane -- to make a quick right turn, or oncoming cars making a left turn across the lane. Then there are always those impatient drivers, stuck behind a long line of cars (such as, when someone ahead is waiting to make a left turn), who decide they don't want to wait anymore and suddenly pull out into a bike lane, or even out onto the shoulder, to get past the slowdown. Sure, that driver would likely be at fault if they hit a cyclist -- but that's little consolation to the cyclist who would be much better off not being hit at all.

Though I frequently see people ride up alongside cars to get that momentary advantage at an intersection, it just doesn't seem like a good plan to me. Legally questionable, possibly risky, and yet another argument to be thrown against us by drivers who feel the special sense of entitlement that comes with piloting a 3000+ pound machine. I'm all for being an assertive rider amongst the car traffic, but there are times I'm happy to just wait my turn.
Posted by Brooks at 11:47 AM