I saw this article on CyclingWeekly the other day: "Six Reasons Why Electronic Groupsets Are Better Than Mechanical." 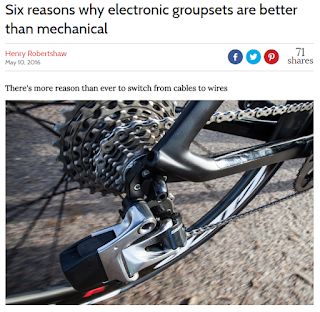 If you are, like I am, an unrepentant retrogrouch, you probably don't care one whit for electronic shifting. But if you have even a shred of morbid curiosity on the subject, here are the six reasons:

1. The shifting is better.

"The top of the range mechanical groupsets have gone through years of evolution to get to their current level of performance, but in just a few years electronic groupsets have taken things to the next level."

Think about the logic of this for a moment . . . Electronic groupsets are better than mechanical - because the shifting is better. "The next level," apparently, whatever that can be.

Funny thing - after owning nothing but manual transmission cars for nearly 20 years, my current car has an automatic transmission. It works great, but there are many, many times that I still miss the manual shifting. I find that I really liked the feel of that clutch, and feel of the gears snicking into place. I liked that mechanical connection I had to the workings of my car, and I like that mechanical shifting on a bicycle has that similar type of connection between brain, body, and machine. Electronics sever that connection.

2. You can shift through multiple gears.

After admitting that many Campagnolo mechanical groupsets have long been able to do this, the article says, "While you’re not going to be going straight from the 28 to the 11 all that often, it is still a really nice feeling to be able to skip through two or three gears when opening up an attack or when cresting the brow of a hill, while the extra power of the rear derailleur means you can do this under load too."

If Shimano's and SRAM's current mechanical shifters don't allow multiple shifts, then that doesn't mean that electronic is better. It means that Shimano and SRAM's regular shifting systems suck.

You know what else allows multiple-gear shifting? Friction levers.

Skipping through "two or three gears when cresting the brow of a hill"? Here's something that anybody with more than a few hundred miles worth of experience on friction levers can do when cresting that hill: One hand wrapped around both downtube shift levers -  shift from small to large chainring with thumb, while simultaneously shifting from largest to smallest cog in back with one or two fingers.

3. You can put shifters everywhere.

Apparently, Shimano's Di2 allows a person to install up to 3 sets of shift levers (or buttons?) pretty much anywhere they want.

Then again, I've never found myself riding along wishing I had more levers, buttons, or switches on my handlebars, so while the concept might be mind-blowing - it's not exactly life-changing.

4. They're great for time trials.

You know, because you can put those remote shifters all over the place, that means you can have one set by the brake levers, with another out at the end of the aero bars.

If you don't time trial, this makes no difference to you.

Also, I don't think this warrants being listed as another reason. I think it would more accurately be listed as reason "3-b."

5. They're less susceptible to the elements.

"Ok, in their early days, electronic groupsets didn’t cope too well in wet conditions . . . However since then things have got a lot better. That’s because all the cables are sealed (or in the case of SRAM Red eTap, they’re not there at all), while the cables of mechanical gears are left open to the elements, meaning that they can wear out over time."

People make a big deal about cable systems wearing out or going bad over time, but the reality is that in this age of smooth stainless steel cables and lined compressionless housing, a mechanical shifting system will work well for years with only minimal maintenance. But a cable shifting system can also take a lot of abuse and neglect, and the worst thing a person will have to do to get it working right again is add a little lube or replace the cables. Will an electronic system hold up to neglect?

6. You can connect them to your Garmin.

"If you’re going to have gadgets galore on your bike, then you might as well have them all talking to each other."

I don't have a Garmin. I don't want a bunch of electronic gadgets on my bike. I get on my bike to get away from video screens and touchpads.

There you go - Six (really 5½) reasons why electronic shifting is better.

So now I present Seven Retrogrouchy Reasons Why Traditional Shifting is Better Than Electronic.

1. No Batteries. With a fully-mechanical bicycle, you are completely self-sufficient -- living "off the grid" as they say. You will never find yourself on a long ride, miles from home, with a useless hunk of derailleur-shaped aluminum and/or carbon fiber -- rendered as such because you forgot to recharge it before you left home.

2. Mechanical systems can be repaired by anyone. Really. Anyone who has a screwdriver, a couple of allen wrenches, and understands the significance of the words "Lefty-Loosie-Righty-Tightie" can fix an ill-shifting cable-op derailleur. Electronic systems reportedly work amazingly well - but what happens when they don't?

3. Traditional systems withstand abuse and neglect. +1 if it's a friction shifting system. Find an old piece-of-junk bike discarded on the curb on trash day. Just for grins, move a shift lever and see if the rear derailleur moves accordingly. Chances are good that it works. If it doesn't, a new shift cable (under $10) will probably fix it.

4. Inherently simple. A traditional shifting system is a marvel of simplicity -- especially with friction levers. There's very little that can go wrong with it. As a kid, first getting into bikes, I learned a lot by studying the mechanical parts of my bike and working on them myself. As I got older, I was able to apply a lot of the same principals to maintaining and repairing my motorcycles and cars. I don't believe that younger people today will have the same understanding of their bikes and how they work (or their motorcycles, or cars) as people who "cut their teeth" on traditional bikes.

5. Friction shifting systems are multi-compatible. For the most part, friction shifting systems don't care about brand, nationality, or number of cogs. Many people think of them as "obsolete" but in reality, they are practically immune to obsolescence. As long as a derailleur has enough range of movement to span an entire set of cogs, it will probably work.

6. Mechanical systems foster REAL connectivity to your bike. The concept of "Connectivity" gets thrown around a lot these days in a world filled with WiFi, Bluetooth, ANT+, GPS, smartphones, computers, power meters, and now electronic shifting -- but to my mind, all those things actually Disconnect us from the best part of riding our bikes.

As I touched on already, I like being able to feel a shift happening -- feeling that connection between my hand or my fingers, through the cables, to the movement of my derailleurs, and feeling that chain move across the cogs. All the electronics separate us from those very real functions of our bikes, and the various gadgets, screens, and touchpads end up distracting us from our surroundings.

7. Did I mention "No Batteries"? Hey, if a major publication with numerous writers, editors, and who-knows-how-many interns can say that "multiple shift levers/buttons" counts as two reasons, then I can count "No Batteries" twice.
Posted by Brooks at 11:08 AM