Eroica California wrapped up its second run a couple of weeks ago, and Eroica Britannia will be coming up soon. After the California edition, there was much discussion (and much griping) about the rules requiring vintage-style bicycles with "old-tech" equipment -- you'd never believe just how worked up some people can get at having to use non-aero brake levers and toe-clip pedals in order to participate in a group ride that celebrates cycling's past.

Seriously - some of the complainers would probably go to a Civil War re-enactment and complain because they can't carry their AR-15. (Yes, Clem, we know weapons technology has moved way beyond muzzle-loading muskets. Now will you please go put your Bushmaster back in your trunk?).

I don't know if there will be the same level of "controversy" at Eroica Britannia, in a country where people are a little more immersed in tradition, but I'm guessing it won't be an issue. I mean, have you ever seen their judges? Or the House of Lords?

Although I did not see or hear as much complaining about the clothing requirements, Eroica rules do encourage people to dress consistently with the period: 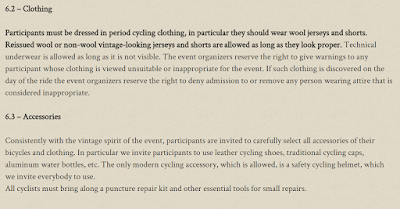 "Participants must be dressed in period cycling clothing, in particular they should wear wool jerseys and shorts. Reissued wool or non-wool vintage-looking jerseys and shorts are allowed as long as they look proper."

That is a disappointment, because if I ever get to participate in Eroica, it means I won't be able to ride in my all-time favorite riding kit:
The watermelon suit comes from Attaquer Cycling. And if you must know, the thing that really sold me on it was the description on their website:

"Watermelon is a vine-like flowering plant originally from southern Africa. It is a large, sprawling annual plant with coarse, hairy pinnately-lobed leaves and white to yellow flowers. It is grown for its edible fruit, also known as a watermelon, which is a special kind of berry botanically called a pepo. The fruit has a smooth hard rind, usually green with dark green stripes or yellow spots, and a juicy, sweet interior flesh, usually deep red to pink, but sometimes orange, yellow, or white, with many seeds."

See? Not only can you buy this spectacular matching cycling suit, but get a nice botanical lesson as well. And if the watermelon suit isn't to your liking, you might be interested in my second favorite skinsuit:

From the Attaquer website (again): "Peafowl include two Asiatic species and one African species of bird in the genera Pavo and Afropavo of the Phasianidae family, the pheasants and their allies, known for the male's piercing call and, among the Asiatic species, his extravagant eye-spotted tail covert feathers which he displays as part of a courtship ritual. The term peacock is properly reserved for the male; the female is known as a peahen, and the immature offspring are sometimes called peachicks."

You are now ready for polite dinner conversation or drinks with an ornithologist.

Like the peafowl on which it is modeled, I like to wear this one for courtship rituals. But again, it is not appropriate for Eroica. So what is a person to do?

I recently found a couple of places where one can get traditional wool jerseys that are not only Eroica-compliant, but really cool for retrogrouches no matter where they ride.

One company is Tiralento in Italy, which offers traditional-looking wool jerseys and shorts, classic leather cycling shoes, and even leather hairnet helmets (Eroica allows/encourages modern helmet use. Leather hairnets are more about "looks" than "safety"). They also have some vintage team replica jerseys that might interest some out there.

Another company turning out traditional wool goods is Magliamo in Belgium: 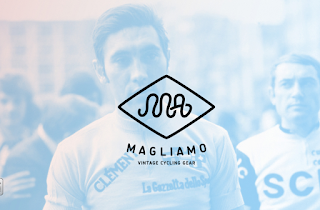 Like Tiralento, Magliamo are producing fine merino-wool replica jerseys from classic era teams, in short or long-sleeve versions. Here are a few samples:

One other source for traditional wool has been around for a while now. That's Vintage Velos, which offers super nice merino wool jerseys and shorts from Woolistic. 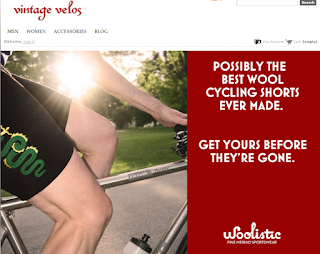 I actually own a couple of the Woolistic jerseys from Vintage Velos and can attest that they are very soft and are well made. Here are some samples:

I've heard good things about the Woolistic wool shorts, which are mostly wool, but also blended with nylon and elastic, so they don't get saggy - unlike the old wool shorts of the past. They are $145.

Yes - it's all very pricey stuff -- but that seems more or less in line with the cost of most traditionally made wool and leather goods these days. And at least in the case with the Woolistic jerseys which I've personally tried, they are actually softer and nicer in a lot of ways than many of the vintage examples from the past. Want some classic wool cycling clothes for less? You can always check for actual vintage jerseys on eBay, but be prepared for some disappointment - like moth holes, or really scratchy blends, etc. Used and vintage wool can be really hit-or-miss.

Oh - and as long as we're talking about prices, I should mention that the lycra watermelon suit shown above sells for about $350. You can't buy the peacock one anymore, as they're all sold out. No. I'm not joking. Sold out. That puts the price of these traditional wool goods into perspective, doesn't it?
Posted by Brooks at 7:29 AM