Back in 2014, the new American-based Silca company introduced cyclists to the Ultimate Inflation Tool. At $450, the Super Pista Ultimate was way too exclusive to be called a "pump." While it has been easy to have a bit of fun joking about the price, by all accounts the Ultimate Inflation Tool really does live up to its billing. Anyone I've talked to who has tried it has said it is the smoothest, most solid pump they've ever used - and built to last forever.

This week, Silca announced the release of a new inflation tool that is supposed to keep some of the best functional attributes of the Super Pista Ultimate, but with a more down-to-earth attitude -- more stealth, less bling -- a little less "Ultimate." In fact, the name is exactly that: The Super Pista. Period. Price is listed at $235.

The regular Super Pista tones down some of the more "boutique" features of the Ultimate, but keeps a lot of the attributes that make the more exclusive sibling work so well. The shaft, piston, bearings, and plunger are either the same or very similar to the Ultimate. It's all metal, no plastic, made to work smoothly and last darn near forever.

There are several features that help keep the price somewhat below the stratosphere.

It's still pretty expensive, but at roughly half the cost of the Ultimate, the regular Super Pista brings a lot of the amazing quality and precision of the Ultimate Inflation Tool to a more earth-bound class. 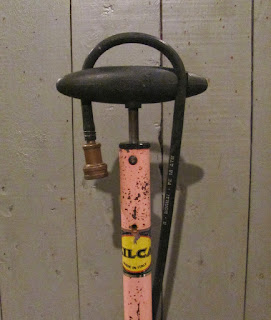 I'll still be holding on to my Columbus-tubed classic for a while (teacher's salary, remember), but a new Silca replacement doesn't seem quite so out of reach anymore.
Posted by Brooks at 7:49 AM