I suppose when a pump sells for $445, you really can't call it a "pump" anymore. Hence, the Ultimate "Inflation Tool" from the new Silca.

I had written last week about classic old Silca pumps, with a bit of history on the company. In that article, I explained that the company which had been owned by the Sacchi family in Italy since 1917 was sold last year and moved to Indianapolis. Though the new incarnation of the company is apparently still supplying some of the replacement parts for the old classics, there are apparently no plans to reissue or resurrect the old pump designs. Instead, the goal of the new Silca is to maintain the original company's reputation for innovation, while respecting tradition, durability, and serviceability. As of the writing of the article last week, the company had introduced a new pump head, similar in design to the classic brass version, but crafted in stainless steel, with an elastomer gasket for a better seal and longer life. At that time, I mentioned that the company had plans to introduce a whole new pump that new owner Josh Poertner hoped would be "unlike any other pump ever sold." Well, introduced just this past week, here it is -- dubbed the Super Pista Ultimate, which is described as the ultimate Inflation Tool.

Built in the U.S. with top-quality materials, the new Silca is "meant to define a new category of Inflation Tools." The press release goes on to say that the "SP Ultimate will keep the Silca Passion alive for the next generation." The new Inflation Tool has classic features like the solid metal presta chuck and the replaceable/regrease-able leather plunger washer. "Meant to be heavy, ergonomic, rebuildable, and built to last a lifetime."

The handle on Ultimate Inflation Tool is supposed to have been inspired by top-quality tools, such as culinary knives. The grips are made from hand-turned rosewood, mated to investment cast stainless steel center and end pieces for beauty and durability. 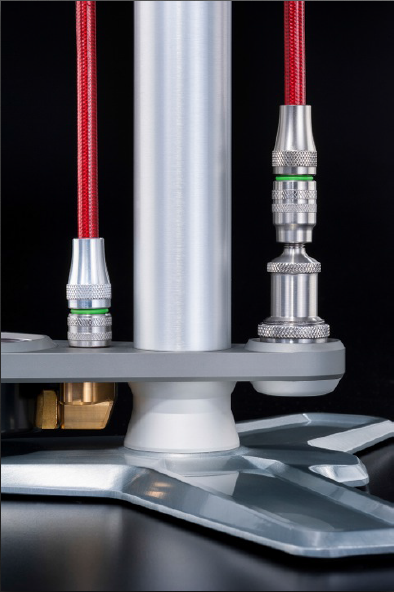 The base is described as being heavy and stable -- at 800 grams, the base alone is heavier than most complete pumps. An unusual feature is something called the "Surfboard Control" which is a "high precision piece of CNC machined aluminum which contains the air passage between the check valve body and the gauge/hose." This surfboard feature essentially "floats" above the base, keeping the important and delicate pieces of the pump off the ground, and holding a magnetic dock for the chuck. The surfboard also serves to transfer the air to the hose, and functions as a protective bezel for the high-precision pressure gauge.

Did I say something about a magnetic chuck dock? Yes. The chuck is made from 17-4 stainless steel -- which is one of the few types of stainless that is attracted by a magnet. The MagnetDock contains a neodymium rare earth magnet which secures the chuck when not in use. If the chuck is anywhere near the dock, it will seat itself, and this would be a useful feature, because the hose (rated for 12,000 psi, and made with over-braided stainless steel -- used in the pits at Indianapolis Speedway) is a generous 51 inches long. Borrowing more technology from the motorsports industry around Indianapolis, the barrel and piston rod are precision-made and teflon hard-anodized for smoothness and durability. Oh yeah, and it sells for $445.

When I first saw a classic Silca Pista pump, back in my teens, I knew I wanted one, but the price at the time was a bit more than my then-meager budget would allow. I eventually found one about 1/2 off on clearance -- possibly because it was painted pink, and apparently nobody wanted a pink pump. I've had that thing for around 30 years. My wages today are considerably higher than they were in high school, but as nice as it is, at $445 the new SP Ultimate is still priced way out of my budget. Lucky for me, my old pink classic should last a long time.
Posted by Brooks at 2:42 PM