I was out for a ride this weekend, and while riding along a very popular stretch of road in the Cuyahoga Valley National Park (CVNP), I came upon a guy on foot, carrying his very expensive-looking carbon fiber bike on his shoulder. The man himself was all decked out in full-on fred mode, with a team jersey that matched his team shorts that matched his helmet that matched his bike. I stopped to see if I could offer any assistance.

"Anything I can do to help you?" I asked.

"Probably not," he said. "I broke a spoke. Somebody's coming to pick me up." 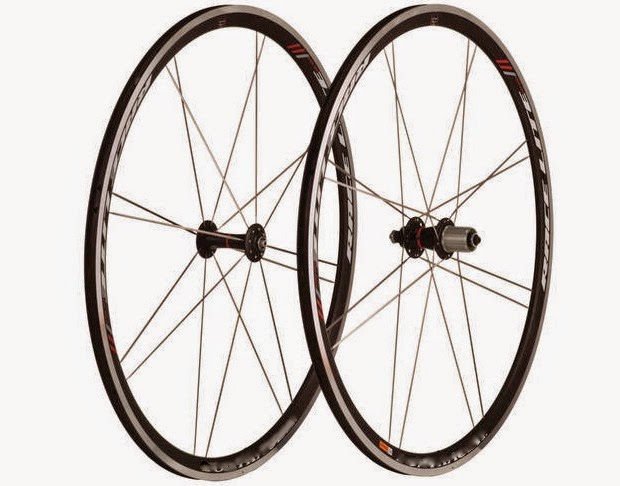 I looked at the wheel. It was one of those 16 spoke wheels, with paired "bladed" spokes and an aero-section rim. "Boutique" wheels. He probably paid a lot for them. One of the spokes had, indeed, snapped, and the wheel went so badly out-of-true because of it that it would have been impossible to open the brakes wide enough to let it pass through. It probably wouldn't fit through the bike's stays, either.

I've been riding seriously for well over 30 years, and I don't think I've ever had more than one broken spoke in all that time. It certainly didn't end my ride, or leave me calling for someone to come get me. I don't even remember having to open up the brakes or anything. I probably just rode home and avoided potholes. With a 36 spoke wheel, you can do that. One broken spoke just isn't a ride-ender -- and it shouldn't be.

I suppose opinions on it can vary, but as far as I'm concerned, the ideal set of road wheels has 32 spokes front, 36 rear. For a loaded tourer, I'd go 36 front/40 rear. The front wheel is usually under less stress than the rear, so one can get away with fewer spokes without impacting durability, but even there I think of 32 as a minimum. I might use 28 for the front on a track bike, but not for the road. My Rivendell has 32 front and rear -- which bothered me a little at first, but the hubs were sold as a pair, and that was what I could get at the time. I built the rear wheel with an off-center rim that reduced the wheel dish by a few millimeters, which I thought might be helpful to even-out the spoke tension and improve durability. Thirteen years and I don't even know how many miles, and it's been trouble-free.

Another thing about the wheels on my bikes is that I built most of my wheels myself. I have a couple sets that were built by a friend at the bike shop -- but basically all the wheels I use are hand-built. They are all built well enough that they don't often get out of true, but when they do, it's always a very simple matter to touch up with a normal spoke wrench, and if a spoke does break (as I said, I can only remember once -- so we're talking about "what if") replacements are "normal" and plentiful. That cannot be said of many of these expensive, low-spoke boutique wheels.

The trend to fewer spokes, and paired (or other unusual or proprietary patterns) is one that really just doesn't make a lot of sense. There's a perception out there that dropping anywhere from 16 to 20 spokes from a wheel saves weight, but often it means that the rim has to be beefed up to handle the much higher tension that comes with having fewer spokes. I haven't tried it (and don't intend to) but I would guess that if you tried to build a 16-spoke wheel using a pair of vintage Super Champion Medaille d'Or rims (265 g!) the necessary tension on the spokes would probably rip the rim apart. And with all that extra tension per spoke, it also means a higher likelihood of broken spokes. And as the incident above makes clear, even one broken spoke with these boutique wheels means walking home.

The real advantage is supposed to be aerodynamic and I'm sure there the manufacturers have all kinds of wind tunnel data to "prove" just how many seconds their wheels will save over however many miles -- but again, at what cost? How many seconds are you saving when you're waiting on the side of the road for a lift?

Having said all that, let me get back to my ride this weekend. As I left the rider with his broken spoke and he waited for his ride to come get him and take him home, I thought to myself that I finally had figured out a real advantage to a super-light carbon-fiber bike. When it breaks and you have to carry it home, at least you'll have less weight to carry on your shoulder.
Posted by Brooks at 1:18 PM