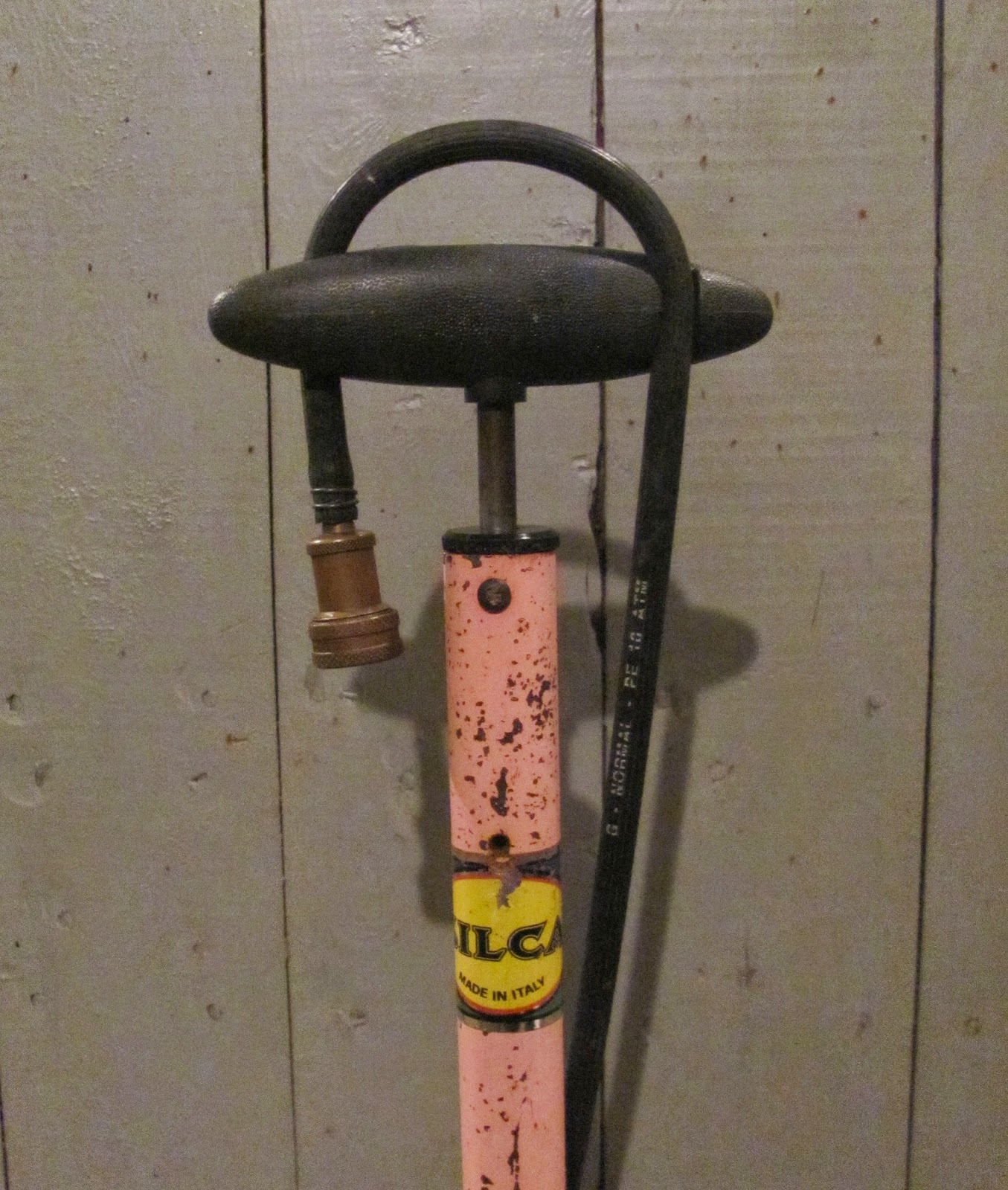 It was the pump that the shaggy, unshaven mechanic at my local bike shop swore by. It was a battered-looking old beast that had once been a deep, burnt orange color -- now chipped and battle-scarred, peppered with rust. The foil sticker that once bore the brand was partially torn off: "ilca" it now read. But I could still make out the little Columbus tubing sticker near the base of it.

"Columbus tubing? On a pump?" I asked.

"It's the best" he replied with a shrug.

The thing was solid and substantial. He let me try it out, and I was amazed at the smoothness of it. Pumping a narrow racing tire up to 100 psi was nothing. The gauge went up to well over 200 -- not that you'd ever need to do that. But just knowing you could . . .

I don't remember how much a Silca Pista pump sold for back then, though I remember it was a bit more than my unemployed student budget at the time could afford. But I knew I'd have to get one some day. 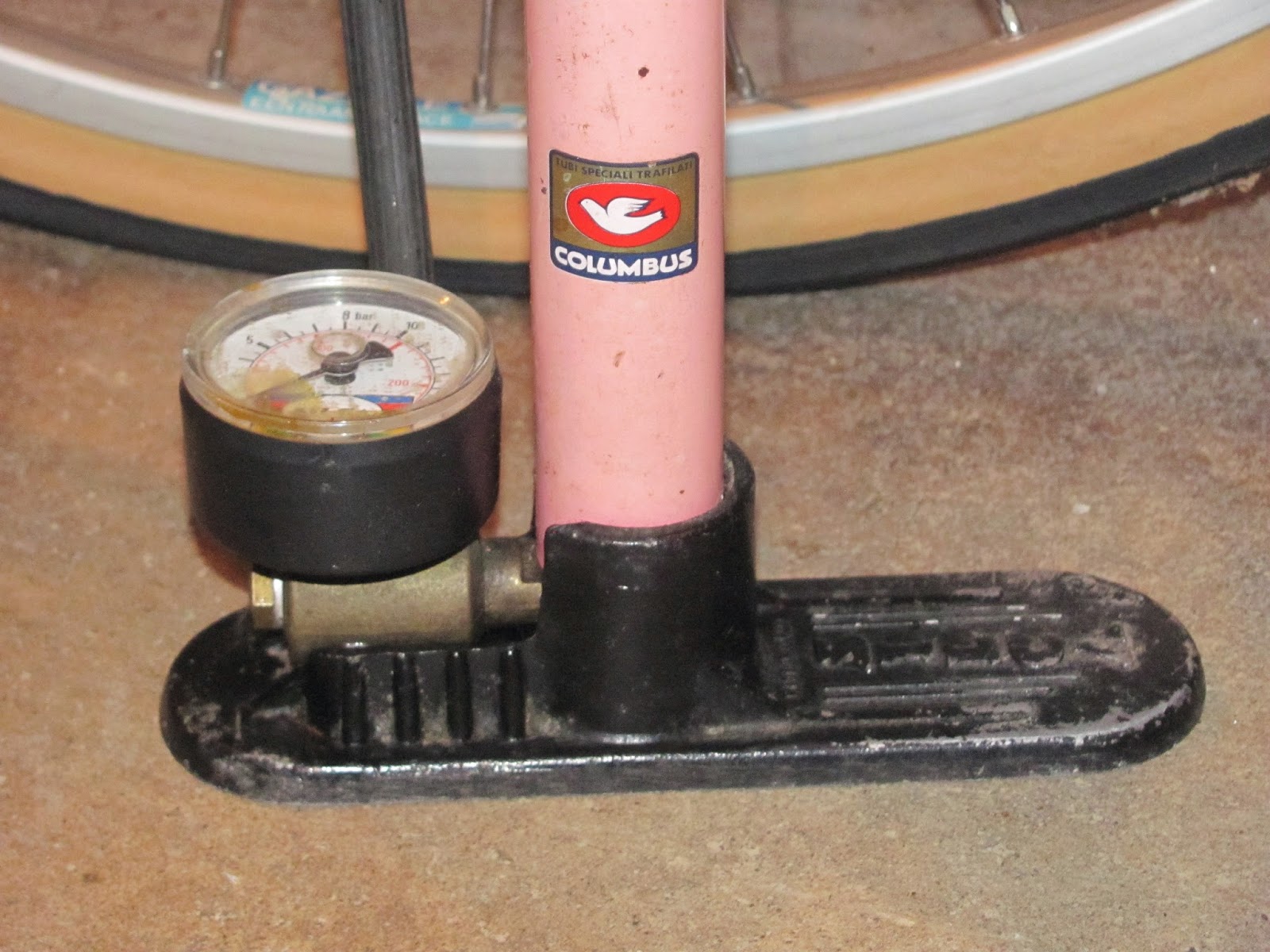 When I was a student at Kent State, we were about 40 miles from Youngstown, which was the home of Bike Nashbar. Nashbar had a warehouse outlet where you could go and get great deals on over-stocks, closeouts, returned goods, and more. A bunch of my bike-mad friends and I would occasionally pick a Saturday to pile into somebody's car and take a trip to the warehouse to do some bargain hunting. During one of our visits, I found the Silca Pista pump -- in a very 80s shade of pink -- marked down 1/2 off. Nothing wrong with it. Apparently nobody wanted pink. My friends teased me about the color, but what did I care? I wanted a Silca pump, and now I could get one. 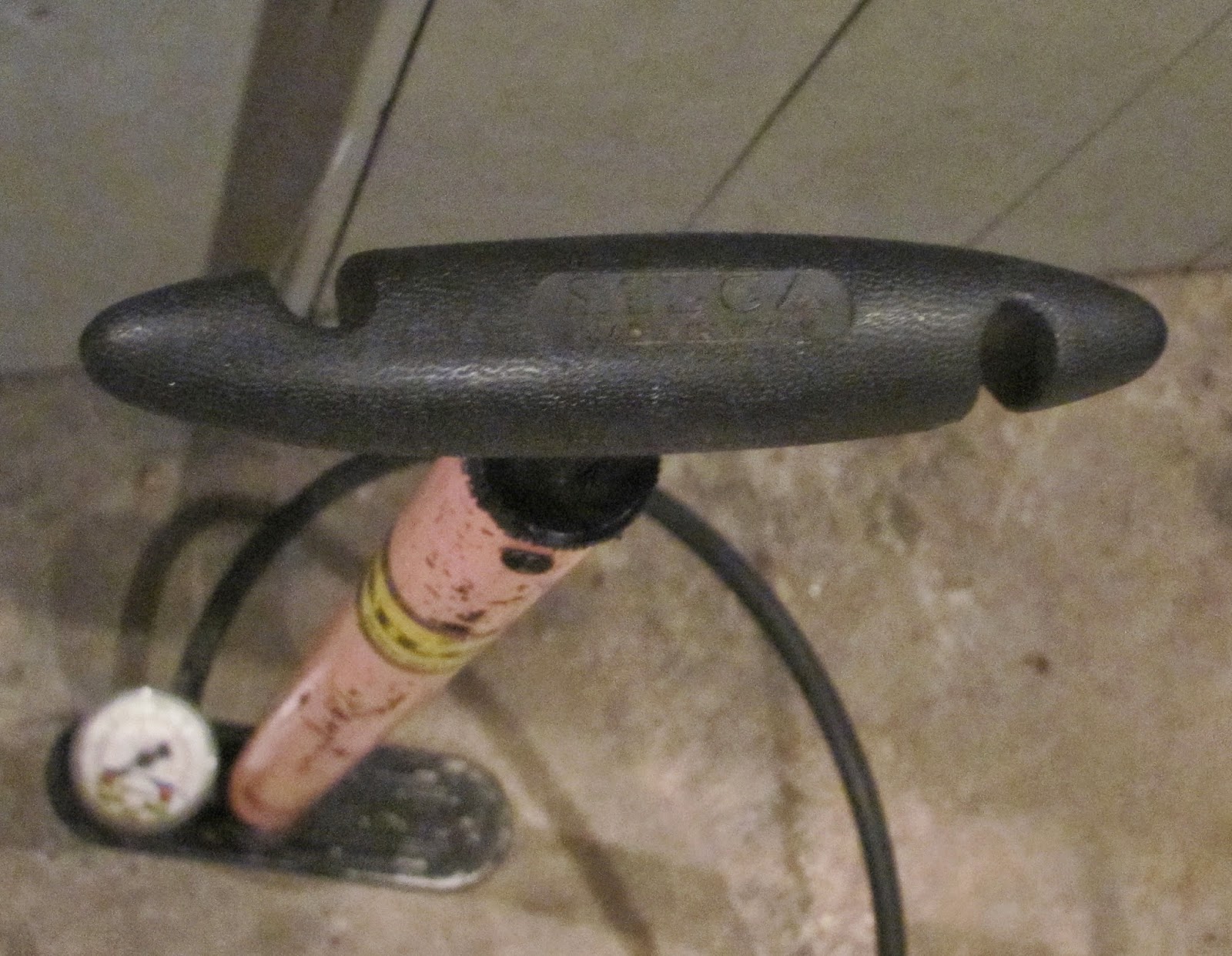 That was about 30 years ago, and I still have my "Miami Vice" pink Silca Pista pump. The pink paint is now battered and peppered with rust, not unlike the first one I ever saw, but the little Columbus tubing sticker is still there. The pump still works great.

A few years ago my basement flooded, and the Silca was under water. It didn't work right after that, but the pump is totally rebuildable, and replacement parts are still available. A friend at my local bike shop had overhauled a couple of these in his time, so he took care of mine. He cleaned it all out, replaced the leather plunger, greased it up, and it was back to working like it should. 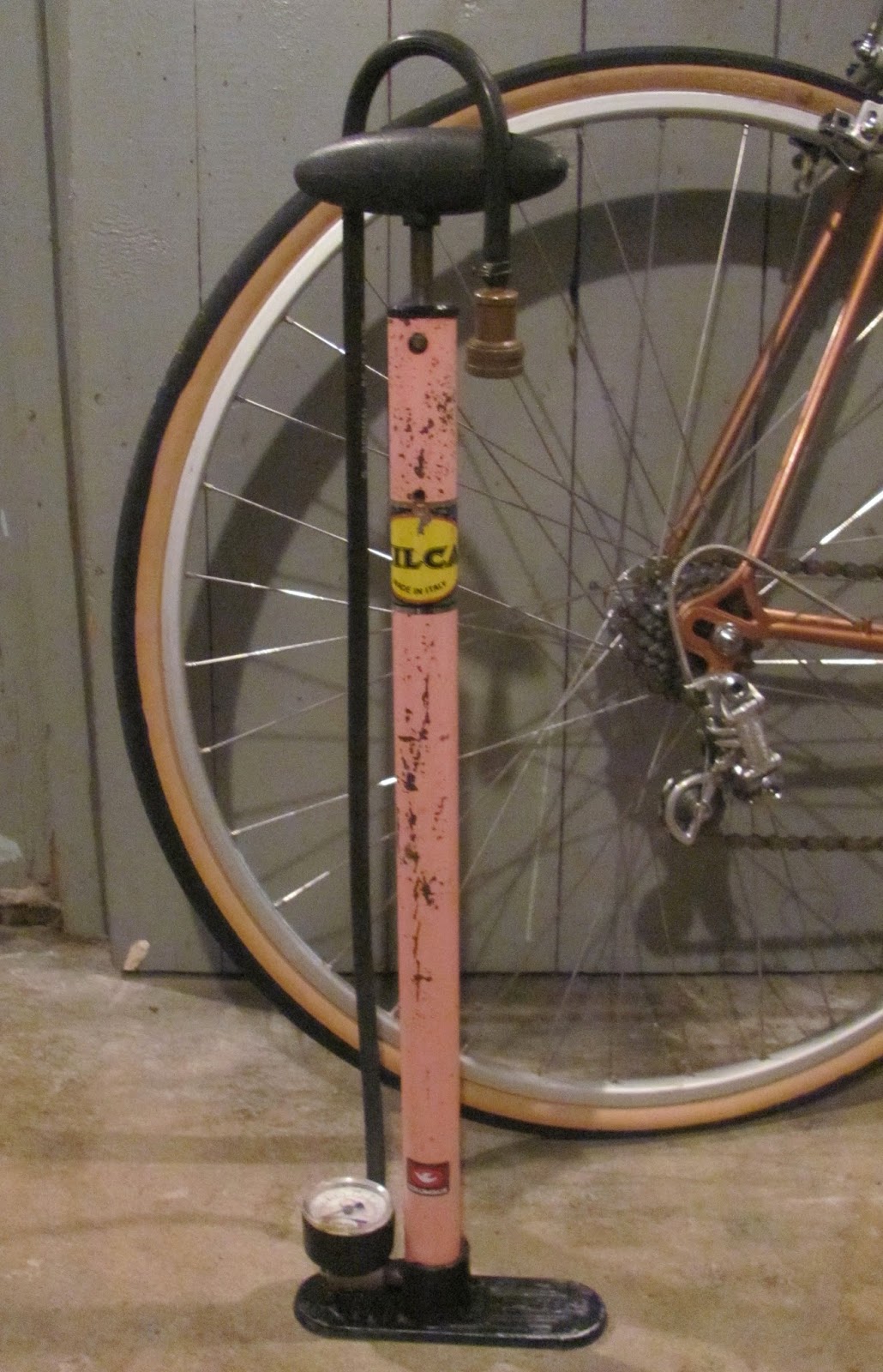 I still use it, though I've found (as many other cyclists have) that it is less than ideal for large-volume tires, like those on mountain bikes. It takes a lot (lots and lots) of pumping to fill a fat tire like that. No big deal. The larger "Super Pista" model apparently addresses that issue. It also is less than ideal when you need to switch over to schraeder-type valves, so I have a second pump out in the garage for the kids' bikes and the mountain bike. But the Silca is still my favorite, and is still there in my workshop, still pumping up tires on my classic road bikes. Something about it just feels right.

Silca Impero frame pumps were another classic bit of equipment. They were lightweight and easily fit along the seat tube or under the top tube. Like the Pista floor model, it was rebuildable. When it came to frame pumps, you either used the Zefal or the Silca. A lot of people swore by the Zefal. It was a little heavier (more metal, less plastic), and maybe even a little easier to use. The Silca took a little more "technique" to use, since the head didn't lock onto the valve stem like the Zefal's would. I figured it worked well enough to get you back on the road. What more did you need from a frame pump? 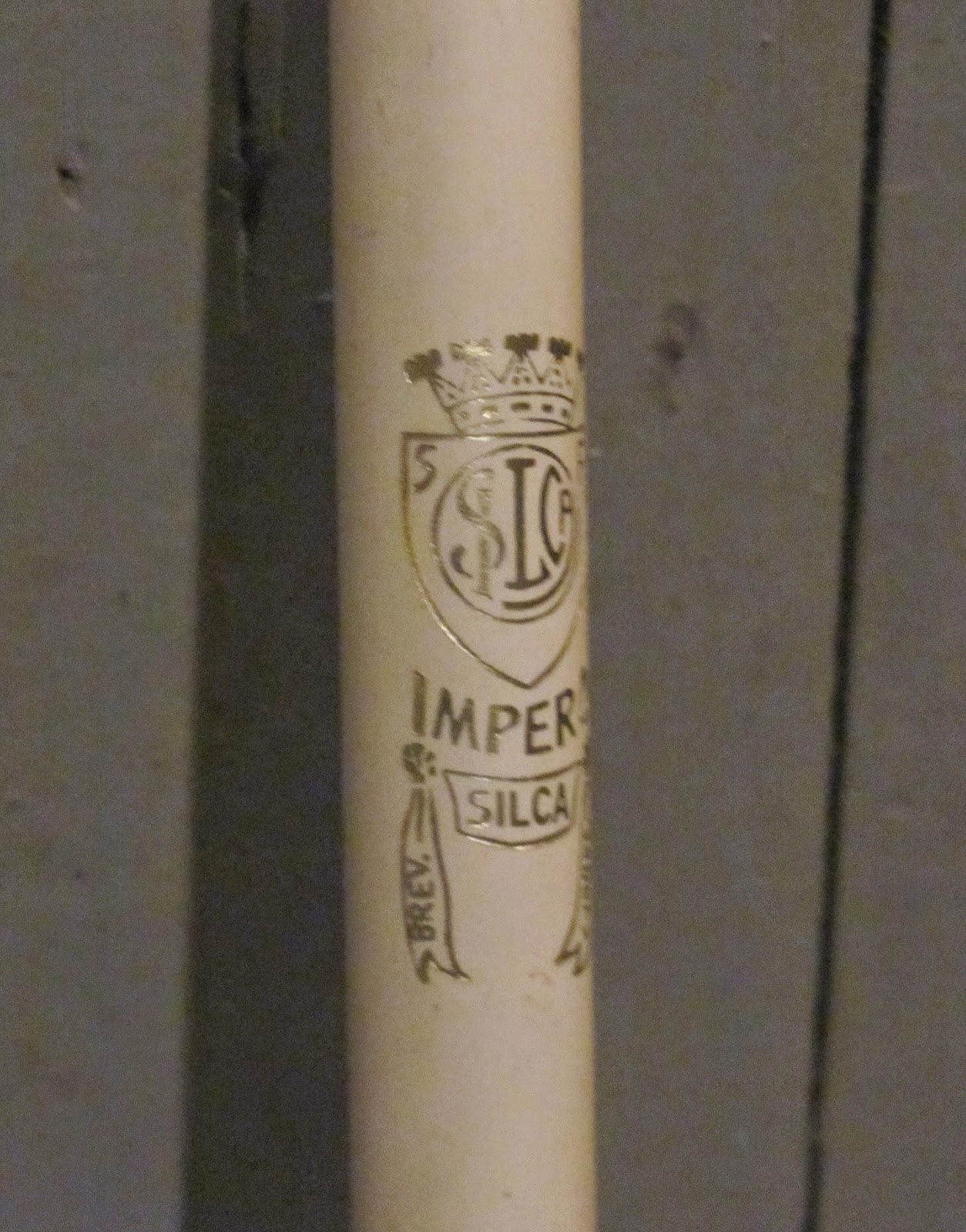 People would say the Zefal would last longer. But the Silca would last long enough if you didn't abuse it. And it was the classic choice. It came in a lot of colors, and many frame builders would paint them to match a custom frame. They didn't seem to do that with the Zefals so much. And Campagnolo made a chromed steel pump head for the Silca -- which was a cool bonus. The stock plastic head on the Silca was alright, but the Campy head looked better and would last indefinitely -- probably longer than the pump. I broke a Silca frame pump once -- cracked it over the head of a pursuing dog. I took the Campy head off and installed it on a new pump, which I still have. Someone told me once that the Zefal wouldn't have broken. Maybe not -- but it probably would have dented. How well would it work after that? Maybe OK, who knows? 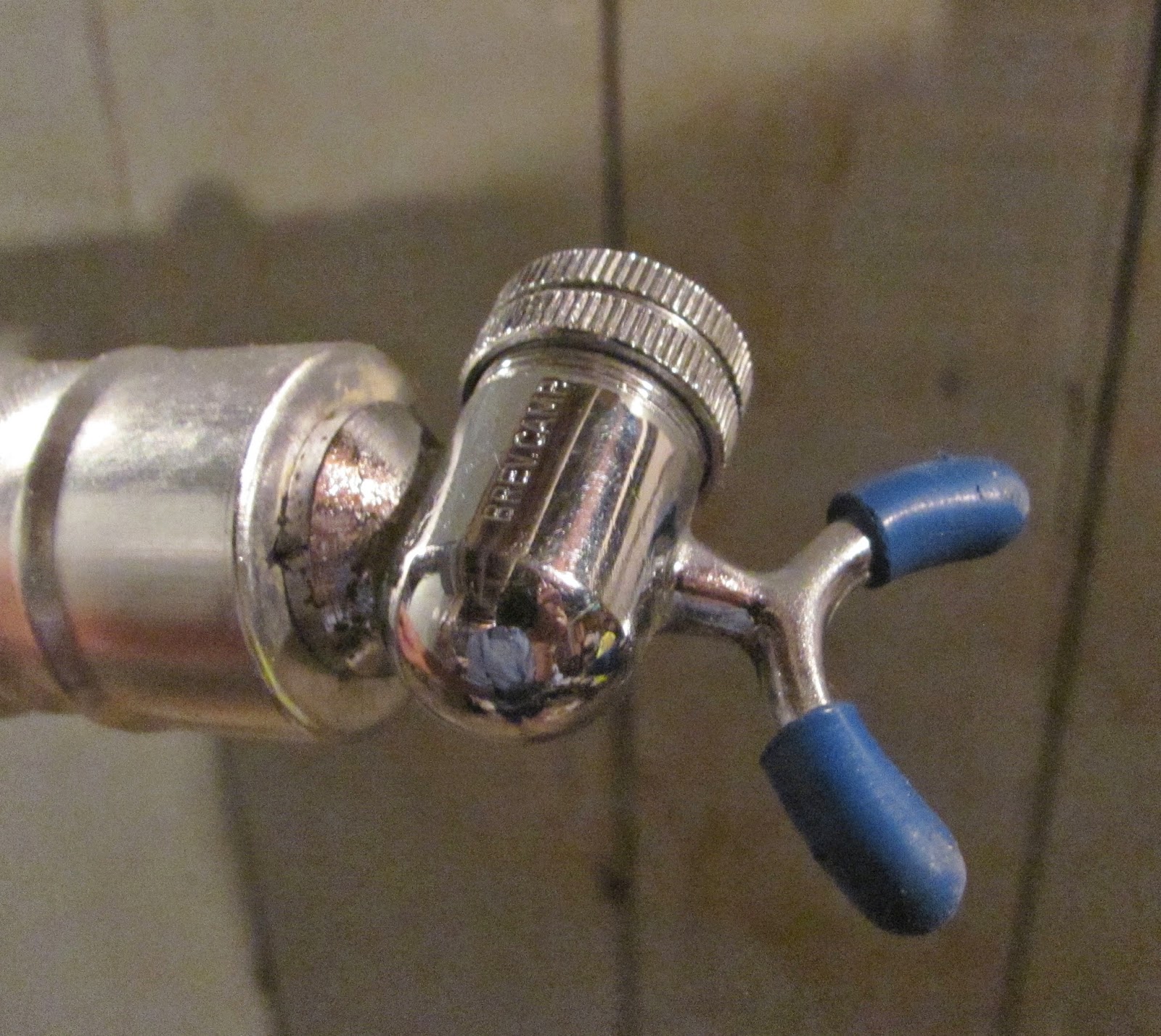 The Impero frame pumps were discontinued some years back, but finding new-old-stock ones doesn't seem to be too difficult. I know there are some online bike shops that still list them for sale, and I've even been in a few older bike shops that had a big box of them tucked away in the back, and in a variety of lengths. The chromed Campagnolo heads still come up now and then on the vintage market. So it's still possible for lovers of the classics to keep using this blast from the past, and to keep them working like new.

The Silca company was founded in 1917 by Felice Sacchi in Italy. The Sacchi family, from son Giancarlo, through grandson Claudio, continued to own the company right into the first part of this millennium, making it the oldest company in the bicycling industry to be run continuously by a single family. The company claims to be the first to incorporate a pressure gauge into the base of the pump, and the first to make a frame pump that didn't need add-on clips to attach to a bicycle frame.

Last year, Claudio Sacchi died of cancer, but shortly before he died, he sold the Silca company to Josh Poertner, a former engineer with Zipp carbon wheels. Poertner moved the age-old Italian company to Indianapolis, where he is gearing up to revive the company. Silca had been in decline in recent years, finding it difficult to compete in the modern market with so much Asian competition, and some of its standby products were dropped. According to an article in Bike Retailer and Industry News (BRAIN), Poertner plans to mix old and new, tradition and innovation, to bring the company back to the forefront. While the company continues to source parts for the vintage pumps, it seems they may not have plans to re-release new versions of the old classics. Oh well.

Poertner says the original Silca was about innovating, and he plans to respect that. One of the first things Poertner did was to introduce a new stainless steel version of the classic brass pump head with an elastomer gasket in place of the old rubber one -- it's supposed to provide a better seal while lasting longer. In the BRAIN article, he says the company is working on a new pump that he hopes will be "unlike any pump ever sold." I didn't know that tire inflation was something that needed cutting edge technology, but I'm glad I should still be able to get parts for my old favorites.

If you search Google for Silca pumps, you'll find there are a lot of people who adore the old things as much as I do. They take pictures of them and post them on Flickr, Tumblr, and other photo sharing sites. One can even find t-shirts and musette bags with the Silca logo on them. It may be a bit surprising, but just like great old vintage bikes, we still find ourselves drawn to them in spite of the fact that newer "improved" options might be available. Is it simply nostalgia? Or is it because in a throwaway and disposable world, we place a certain value on things that are simple, durable, and rebuildable?
Posted by Brooks at 8:06 AM