It's true. Bicycles aren't fast. Until someone gets on and starts pedaling, they are basically stationary objects. And as far as speed goes, it has much more to do with the engine (that's you or me) than the bike. 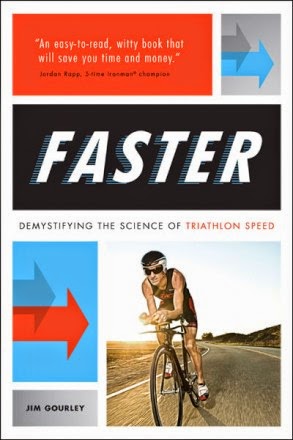 No surprise to me, and maybe not to regular readers of The Retrogrouch -- but the surprise was finding that essential idea written in an article on VeloNews: Bike Weight and the Myth of "Fast" Bikes. The article is basically an excerpt from the book FASTER: Demystifying the Science of Triathlon Speed, by Jim Gourley. I don't care much about triathlons (I bike and I run, but as far as I'm concerned, swimming is something you do to keep from drowning), but I may have to add this one to my reading list.

"Let's clear something up," says Gourley. "There is no such thing as a 'fast bike.' Bikes are neither fast nor slow. Bikes are shiny or expensive. Bikes have a lot of mass or a little. . . Of all the equipment on your bike, your legs are the most critical component. There are plenty of nice bikes on the road that are being ridden slowly." He then adds, "But more insidious than inaccurate vocabulary is a simple overestimation of how much bike weight matters for most riding."

Agreed. Consider the drive towards less and less weight - at the expense of durability: Carbon fiber frames that may or may not be "temporary" investments, carbon fiber wheels, cranks, seat posts, handlebars and stems -- stupid-light components, all of which drive up the cost of high-end bikes, and compromise the reliability and durability in the name of more "speed." Gourley looks at the cost of these and compares it to the perceived benefits, which turn out to be far less significant than people are led to believe.

An odd detail (to me) is that in Gourley's hypothetical comparison between two riders going uphill, the "heavy" bike is 15 pounds, and the "lighter" bike is under 12. I know there are now bikes weighing even less than that, but I'm a bit aghast to think that 15 pounds is now considered "heavy." Nevertheless, the point he makes is more about the 3.2 pounds difference between the two bikes, and how the difference in power necessary to keep both bikes going the same speed is so insignificant that it barely registers on the chart.

Gourley makes the point that one cannot just look at the weight of the bikes, but that one has to consider the weight of the rider as well. Grant Petersen makes that same point in his book Just Ride, and I've argued the same in other posts. I've also argued about it with cyclist friends who obsess about bike weight. But it's a point that many weight weenies seem to ignore.

The article states, "3.21 pounds is just over 2 percent of the total weight of our 150-pound cyclist and 15 pound bike. Ten watts is 2 percent of the 500-watt power requirement to maintain speed up a 10 percent grade. . . The implication is a bitter pill, though. If you want to reduce the power requirement by 1 percent, you have to reduce the total mass that's moving up the hill by 1 percent. And because you're moving both your body and the bike up the hill, a measly 1 percent equates to a whole lot of grams before you see returns on your carbon investment."

That "investment" gets awfully expensive, too. Gourley estimates that saving 500 grams on a bike can add about $500 to the price -- something that wouldn't surprise me, but I'd like to investigate it.

The article does draw a distinction between professional racers and the rest of us. The pros are at the peak of their physical fitness and performance level -- and closely matched with one another. At that level, the differences in weight, and watts, and even just a couple of seconds, just might mean the difference between winning and losing. It's also worth noting that those guys don't have to buy their own bikes. But for most people, and for most riding, it just doesn't matter. A fast rider will still be fast, even on that "heavy" 15 pound bike -- or a 20 pound bike, for that matter.

There we go -- another book for my reading list.
Posted by Brooks at 9:35 AM