My older daughter just learned how to ride a bike. She's a bit of a "late bloomer" as far as that goes, being that she turned 9 recently. I was afraid it might never happen. She's always been a pretty cautious kid -- painfully shy, and usually afraid to try anything new, whether it be new foods, new subjects at school, or any kind of new challenge. She won't even talk on the phone -- not to me, her mom, or anyone. It's like the phone terrifies her. At least I don't have to deal with her begging me for a cell phone, but still . . . 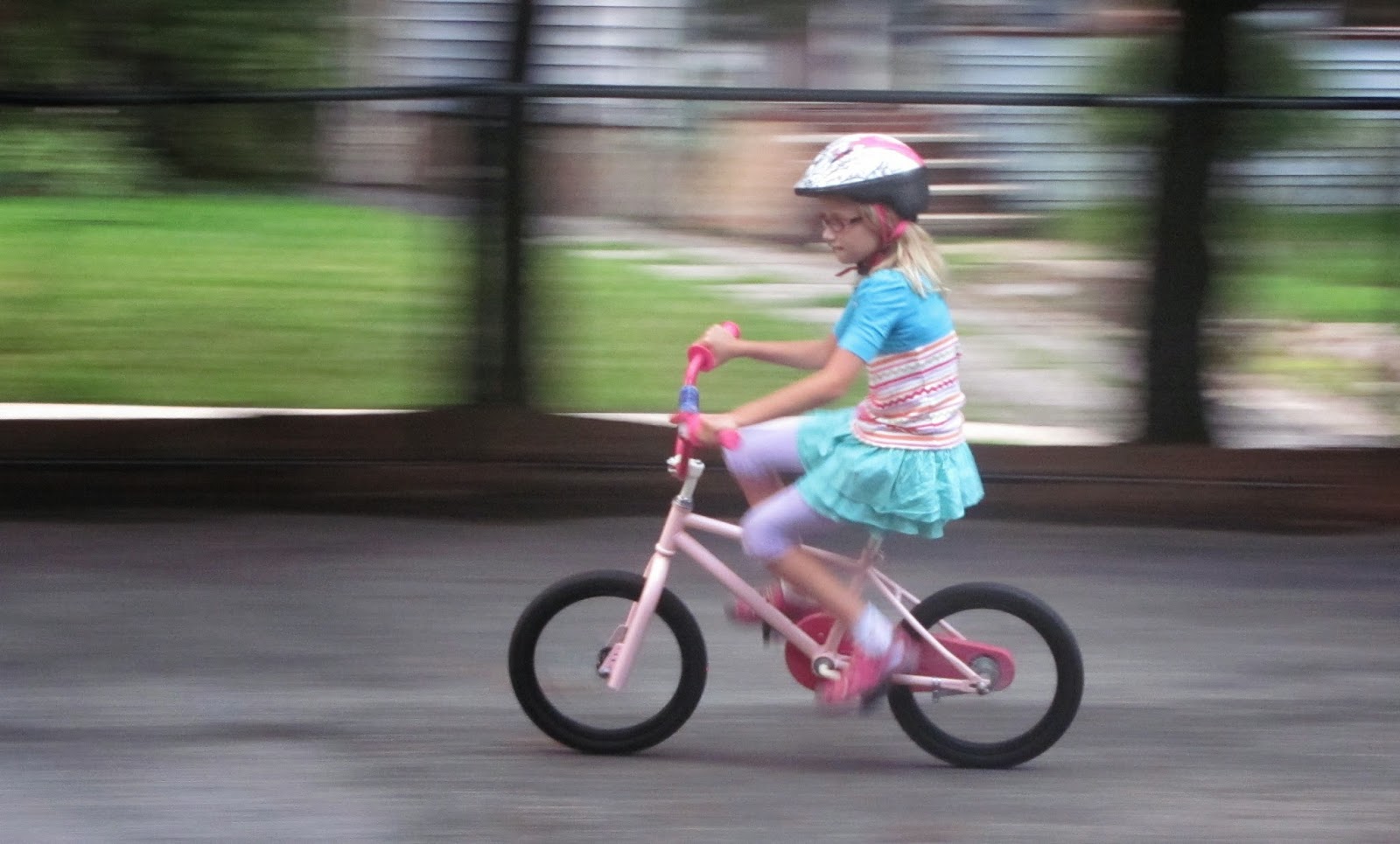 She's been on a bike in some fashion or other pretty much since she was able to hold her head up. From the time she was about a year old, I'd put her in a little Burley trailer and go for rides with her on the canal towpath and around the neighborhood. When she was three or four, we got a hand-me-down tag-along trailer bike, and she took to riding that. For a couple of years, we'd put her younger sister in the Burley and hook it up behind the tag-along, making a full-on family train -- probably against every recommendation by the manufacturers, but it worked fine. When the younger daughter got too big for the Burley and wanted to pedal like her bigger sister, we found a double Trail-A-Bike tag-along trailer, and we've used that for the past two years.

But when it came to learning to ride her own bike, she absolutely refused. When she turned six, we got a hand-me-down 16-in. wheel bike from some older cousins. It was a good size for her and was in good working order, but didn't look so great, so I stripped the whole thing down, repainted it (in the colors she picked out at the paint store), and rebuilt it like new. She wouldn't even try to ride it. Any time I suggested we go out and try it, she'd dig in her heels and refuse. If I tried to pressure her, it would certainly have backfired, so I had to avoid that.

She enjoyed going for rides with me on the tag-along, but had no interest in riding her own bike. After a while, I started to wonder what was going on. It occurred to me that she might think (in her 6, then 7, and eventually 8-year old mind) that if she learned how to ride her own bike, then that would somehow mean that she couldn't ride with me on the tag-along anymore. I asked her about that, and as it turned out, I was right. For a moment there, it looked like all those child psychology classes I took in college might actually pay off. I assured her that I loved riding with her on our tag-along tandem, and that she could ride it for as long as she wanted -- as long as she could still fit on the thing. And when she'd outgrow the tag-along, maybe we could find a way to make our adult tandem work for us. Learning to ride her own bike wouldn't change anything as far as that goes. Breakthrough! Or so I thought.

She still refused to try the little two-wheeler. The thing is, I was certain she could do it -- but she didn't believe it. Didn't believe in herself.

Let me come back to the tag-along trailer bike for a moment. Riding that, and especially the double trailer version, can be tricky. If one of the kids turns around to look behind them, I'll know it. If they are pedaling in a choppy manner, I can feel it. If one of the kids starts to lean unexpectedly, I can immediately feel it in the steering. If they both start to lean unexpectedly, it can send us zinging off in whatever direction they're leaning if I'm not careful. I call the phenomenon "steering from the back" and it can be a little unnerving. It's worse at slow speeds. Anyhow, one day we were riding along and suddenly I could feel the steering start to oscillate, so I knew something was up. I turned to look behind me, and there was my daughter standing up as she was pedaling, or as the French call it, "en danseuse." Oh -- and I should add, grinning from ear to ear.

"What are you doing?" I asked.
"I've seen you do it sometimes and I just wanted to try it," she answered.
"You know," I said, "if you can pedal while standing up, you can probably ride your own bike, no problem."

So now her little sister, who recently turned six, is learning to ride a bike. She has the interest, but balance is still an issue for her, so it's been slow going. Still, the other day I had them both at the park where I was working with the 6-yr-old, while the 9-yr-old watched. I asked if she'd like to give it a try.

So I said, "What're you saying -- you're never going to learn how to ride a bike? You're just going to be one of those people who grows up and never learns how to ride?" No reply.

After a while of watching me trying to help her little sister ride, she came over and asked if she could have a turn. Yes - of course, I said. She strapped on the helmet and climbed onto the little bike I'd built for her over three years ago. It's definitely too small for her now, but it would have to do for the moment. She got her feet on the pedals, I gave her just the slightest little push, and off she went. Like she'd been doing it her whole life (which, I suppose, in a sense she has).

She zipped around the park and came back to me, all smiles. I worked with her for just a few minutes on how to get herself started without help, and before either of us knew it, she had that down too.

On the way home from the park, she said to me, "Can I call mom on the phone and tell her what I just did?"