50 Bicycles That Changed the World

I just finished reading Design Museum's Fifty Bicycles That Changed The World, a slim volume, little more than 100 pages, that takes a chronological look at the evolution of the bicycle through 50 "innovative and influential" machines. The book, written by Alex Newson, is one of a series released by London's Design Museum, which also includes volumes about 50 influential cars, chairs, dresses, shoes, typefaces, and more. 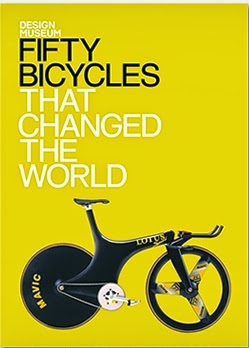 From the description: "The bicycle is the world's most popular form of transport. From the penny-farthing and the velocipede, the design of the bicycle has evolved over the decades both in terms of style and technology. From high-performance cycles to practical run-arounds, conceptual bikes to commercial models, Alex Newson explores the 50 most innovative and influential bicycles from around the world."

Of course, any time someone tries to boil down more than a century of historical significance into 50 objects, there are going to be disputes, and I do have some. However, in this particular case, there are not only questionable/debatable choices, but plenty of factual mistakes. Here's an example, from a section on heavyweight Schwinn cruisers:

"During the first decade of the nineteenth century the United States experienced what is often referred to as the 'first bicycle boom.' This was sparked by a series of vital design innovations such as the safety bicycle and pneumatic tyres and accelerated by modern assembly lines and methods of mass manufacture."

Actually, the first decade of the 19th century would be 1800 - 1810. The bicycle boom referred to in the text was actually the 1890s and was a worldwide (not only an American) phenomenon.

Here's another -- relating to a subject that's been talked about on this blog a few times -- on Greg LeMond's 1989 Bottechia TT Bike, with Scott Aero Bars:

"On the eve of the final time-trial stage of the 1989 Tour de France, Laurent Fignon held a seemingly insurmountable 50-sec. lead over his nearest rival Greg LeMond. Fignon, a very capable time triallist, was expected to ease to victory. However, over the 25 kilometre stage LeMond gained more than two seconds per kilometre over Fignon and secured his first Tour de France title in the process."

There are other mistakes, and yes I'm probably nitpicking. Careful readers of this blog have occasionally picked out factual errors -- but it's one thing when you're a one-man writer, editor, fact-checker, and publisher. It's something else when you have the resources of an actual publishing company behind your work. I just find the mistakes to be annoying, and they detract from the reading experience.

What about the choices of the fifty bikes? As I already hinted, it would be impossible to come up with a list of 50 significant anythings that would satisfy everyone. If the criterion is, as the title suggests, "50 bicycles that changed the world," there are some choices that are virtually indisputable, but there are many others, especially from the modern era, that were probably picked more for their bizarre design-school-exercise aesthetic than any actual "world-changing" influence.

Some "solid" choices: Baron von Drais's Laufmaschine c. 1817; the Velocipede c. 1863; the Penny-Farthing c 1870; the Safety Bicycle c. 1880. Significant evolutionary steps, all of them. Some others, significant for their impact on the use of the bicycle for transportation and work, include: Dutch Omafiets or "grandma bike" (the "men's" version is an Opafiets, but the book doesn't mention that even though the bike pictured is an Opafiets); English Roadster with 3-speed hub; Chinese Flying Pigeon; Cargo and Porteur bikes (as a general category) and others.

Some other bikes are listed for their significance in starting major trends, or changing the way people looked at bicycle designs. These include the Moulton "F-Frame" bikes from the early 60s, which helped start a trend to small wheeled, portable bikes. And some of the first mountain bikes, like those built by Joe Breeze, or the first Specialized Stumpjumper of 1981, which brought mountain bikes to the masses. Although the author credits the "Breezers" as the first "purpose-built" mountain bikes, the book does give credit to the "klunkers" as they were known -- cobbled together from old balloon-tire bikes and motorcycle parts -- which gave birth to the whole mountain bike phenomenon.

There are a number of racing bikes listed, such as Greg LeMond's aforementioned 1989 TdF time trial bike, as well as hour-record machines from Eddy Merckx, Francesco Moser, Chris Boardman, and Graeme Obree -- some of which may be significant for their influence on the sport or on their particular racing events. Other racing bikes listed are more debatable choices, such as Bradley Wiggins's Team Sky Pinarello Dogma. The Pinarello has unusual-looking stays and forks, but on the whole is not that much different from all the other carbon fiber bikes in the pro peloton today, and it's hard for me to see it as any more significant, innovative, or influential than anything else available in the past decade.

Really questionable choices: Bianchi Pista, 2007? Okay, the "urban fixie" thing was a fad, and it may still be really popular in Britain (I don't know), but they are (and were) nothing new. The trend certainly didn't start with the Bianchi, and in no way did it change the world. Another would be the Raleigh Chopper, 1969. The book comes from the U.K., so there may be some bias at play, but either highlight "muscle-bikes, wheelie-bikes, chopper-bikes" collectively as a basic fad (which did have a significant impact on the children's bicycle market in the 60s and 70s), or highlight the bike that first capitalized on it in 1963, the Schwinn Sting-Ray. But the Raleigh Chopper was a late entry to that market -- a follower, not an innovator.

Then there are the masturbatory design school exercises, like the YikeBike, 2010 (an electric-assisted, folding, mini-Pfar), the Vanmoof, 2010 (a "no-nonsense bicycle in which simplicity is the key" -- with its built-in lock, headlight, and taillight) and the Mando Footloose, 2012 (another electric-assist folding bike). Bikes like these illustrate the fact that the bicycle is a wonderful, simple, and beautiful machine -- and most attempts to "improve" it end up doing the opposite. Maybe I'm short sighted, but I cannot imagine some of these things having any impact on the bikes we will ride in the future.

If you're a person for whom any book about bicycles is a "must-have" then you'll probably check out Fifty Bicycles That Changed The World, if you haven't already, regardless of what others will say. But chances are, you'll find yourself disagreeing with, or at least questioning some of the author's selections, and the factual errors will be annoying to any careful reader.
Posted by Brooks at 2:32 PM