"Strange thing about cycling," said sports journalist Samuel Abt, who covered many a bicycle race over the years, is "that it's an individual sport practiced by teams." Though sometimes puzzling to many Americans raised on stick and ball sports, when there is a clear leader and a good team of domestiques for support, the strange hierarchy generally works. But when there is a struggle for that leadership, as happened between Greg LeMond and Bernard Hinault at the 1986 Tour de France, it can rip a team apart. On the other hand, it can also make for good drama. And that is the focus of the documentary Slaying the Badger, directed by John Dower and based on the book of the same title by Richard Moore. 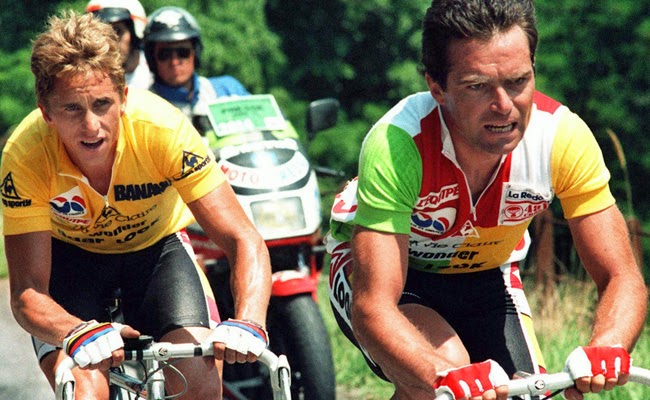 The documentary, which was produced by ESPN Films, aired on ESPN on July 22nd -- though I'd be shocked if they didn't re-run it at some point. If not, I know it can be downloaded from iTunes, and it may be worth looking for it on one of the other video services like YouTube, or Netflix.

The film tells the story of the relationship and rivalry of LeMond and Hinault through archive photos and race footage, and "looking-back" interviews with some of the key players in the story -- including LeMond with his wife Kathy, Bernard Hinault, La Vie Claire team director Paul Koechli, journalists Samuel Abt and Phil Liggett, and former teammate Andy Hampsten.

The film starts out looking at the early days of the LeMond/Hinault relationship -- with LeMond as a young racer, attracting the attention of the French legend Hinault and his then manager Cyrille Guimard. After hearing about the rising young star American, they travelled to LeMond's home in Nevada to lay the groundwork for signing LeMond to one of the best cycling squads in Europe at the time. In many ways, Hinault was not only LeMond's mentor but a friend. Several of those interviewed for the film describe the relationship as brotherly. Anyone with brothers knows that those relationships can sometimes be the most competitive. 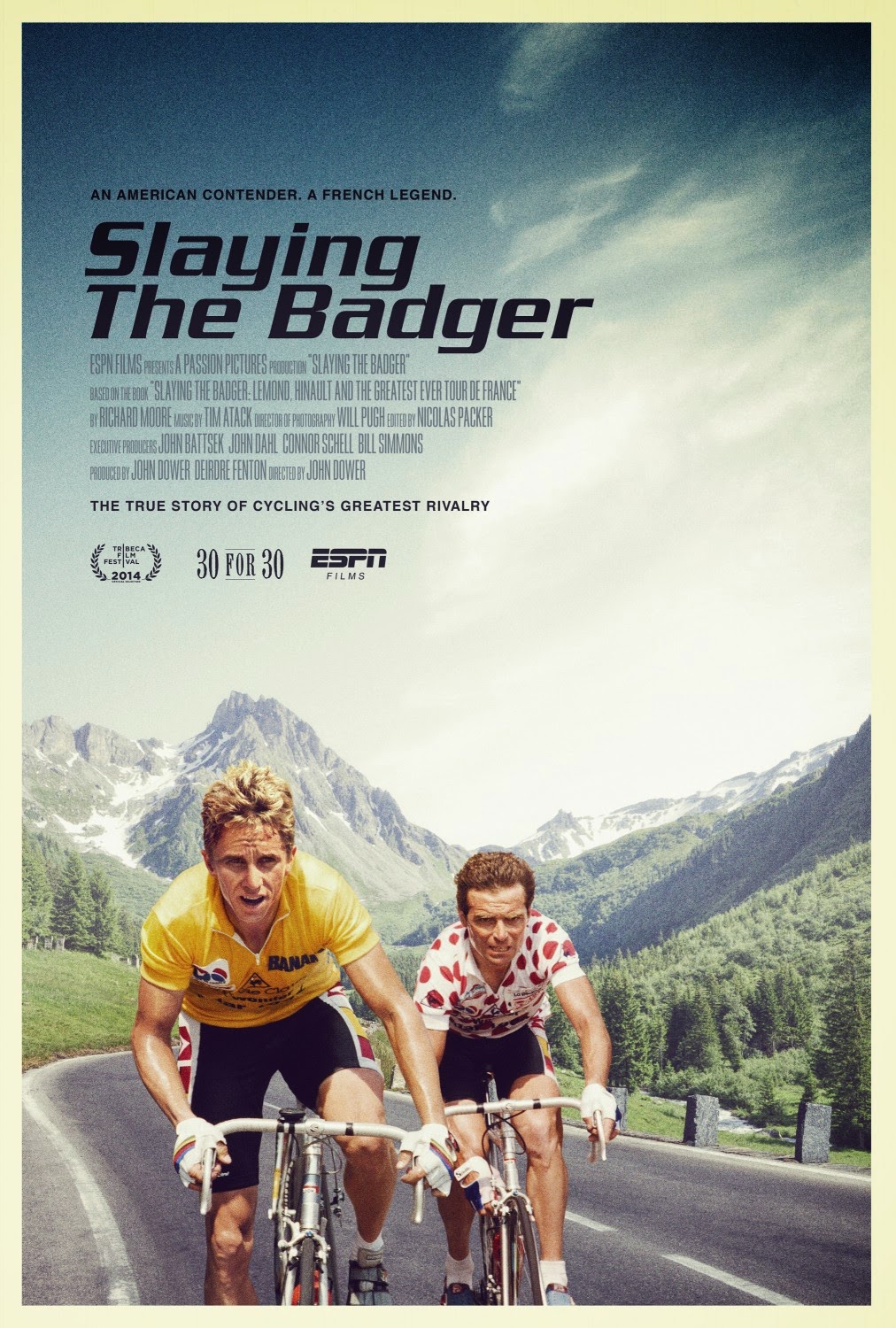 When Hinault fell out with Guimard, he formed a new team, La Vie Claire, with backing by entrepeneur Bernard Tapie, and team director Koechli. Hinault and Tapie offered LeMond a $1 million contract (over 3 years) to join the team and help Hinault win his 5th Tour de France in 1985. It was during that Tour that the seeds of discord were first sown.

Even though the story of the '85 Tour is one any long-time cyclists and bike racing fans already know, the film keeps it compelling to watch as the events unfold, and hearing it through the recollections of those involved. With Hinault as the undisputed team leader and LeMond playing the role of the top domestique, the normal team hierarchy suddenly got turned on its head in stage 14 when Hinault suffered a terrible crash practically within sight of the finish line, breaking his nose and eventually crossing the line with his entire face covered in blood. In the next big mountain stage, on the Col du Tourmalet, Hinault suffered and was in danger of being dropped by the peloton while LeMond was far ahead with a breakaway. With several minutes between himself and Hinault, LeMond was not only in a good position to possibly win the stage, but also to assume leadership of the Tour. When the team car pulled up next to LeMond, Koechli reportedly demanded that the American slow down. Although Koechli seems to remember the events somewhat differently, LeMond insists that he was ordered to wait for Hinault, whom he was told was less than a minute behind. In reality, Hinault was more like 4 minutes behind. LeMond had basically sacrificed his own chance to win for his team leader -- his mentor -- his "brother." For his part, Hinault obviously recognized the sacrifice and promised that he would ride for LeMond in '86.

The story then moves ahead to 1986, where the film shifts back and forth between different versions of events -- from the LeMonds, to Hinault, to Koechli, and Hampsten. With Hinault now a 5-time TdF champion, the Badger (as he was known) seemed to realize he had the opportunity to become the first 6-time winner, promises or no promises. Though Hinault doesn't deny pledging to help LeMond in '86 (and archival interviews make it indisputable) he started dropping hints that he might be looking for some loopholes in that promise. With repeated attacks on the peloton and on teammate LeMond, Hinault took the leader's Yellow Jersey and appeared for all the world to be a man bent on winning the Tour. "In a way he couldn't help himself," says Samuel Abt in the film. "Kinda' makes him sound like a serial killer."

Whether he was attacking LeMond, or, as Hinault would describe it, trying to "toughen" him, the struggle for leadership of the Tour split the loyalties of the La Vie Claire team, and to an extent, the entire peloton. Apart from Hampsten and Canadian teammate Steve Bauer, the La Vie Claire team put its support behind Hinault. In the rest of the peloton, the English speakers were likely to support LeMond, while the majority favored a Hinault victory. In Hampsten's interview in the film, he expresses what it was like to be on a team with split loyalties. When Hinault attacked on the road to St. Etienne, Hampsten was there trying to help LeMond. He says, "I felt terrible chasing my hero, but I had absolutely no qualms about, well, this is the right thing to do."

The film also gives a good picture of just what LeMond was up against from the rest of the peloton -- threats that went beyond normal competition. At one point, LeMond learned that a former teammate of Hinault's offered to take LeMond out of the race by forcing a crash. Phil Liggett, speaking in archived footage, can be heard saying "80% of the riders want Hinault to win. There's a nasty hint that LeMond could be nobbled." In the interview with Greg and Kathy LeMond, the pair relate a conversation they had with Jacques Goddet, the long-time organizer of the Tour, who warned them that there were many people who might be willing to go to great lengths to prevent the American from winning. "Watch your food. Watch your water bottles," he reportedly told them. From there, paranoia set in.

Again -- we know already how the story ends. LeMond proved to be stronger and won his first Tour de France. The first (and officially only) American to do so. For his part in the film, Hinault says with his characteristically charming smile, "He won. So I kept my word. If I had not wanted to keep my promise, it would have been easy for me to race for victory."

Whether Hinault was really riding for himself, or trying to help LeMond is impossible to say, but the film Slaying the Badger seems to lean toward LeMond's side. In his interviews, LeMond clearly seems to believe he was betrayed by his friend and mentor. Most of the other interviews shown also seem to support LeMond. Hampsten, for instance, describes Hinault's repeated attacks as "fratricide." Only team director Koechli comes across as the dissenter.

While I get the impression from the film that I was probably supposed to see Hinault as some kind of villain in this story, personally I have a hard time with that. Hinault was a fierce competitor. On one hand, it's clear that he couldn't have won the '85 Tour without LeMond's sacrifice. Hinault suffered through the latter half of that Tour and it was probably easy at the time for him to make the promise that he would repay LeMond. But the next year, he's feeling good, he sees the opportunity to be the only man to win 6 Tours, and he starts to question the logic of helping someone else to win. Racing for someone else just wasn't in his DNA. Like Abt says, "he couldn't help himself." But also, even as difficult as it was for LeMond to win, with challenges coming from not only the whole peloton but his own team, many people (particularly in Europe) called his '86 victory a "gift" from Hinault. What would they have said if Hinault actually appeared to be helping him? I understand LeMond's sense of betrayal, but in the end, it seems to me that it elevated his victory. If there was any doubt (there was not any for me) that LeMond truly deserved to win the '86 Tour, this film should set things straight.

Though the '86 Tour victory is essentially the climax of the film, it does go on to briefly relate LeMond's exciting '89 win against Fignon, and then (very briefly) the decline of his racing career and the introduction of EPO to pro racing, which would completely re-shape racing for the next era. Those parts seem almost like a footnote at the end of the story.

A couple last impressions from the documentary. I wish there was more of Andy Hampsten in the film. He comes across as genuine, honest, and eminently likable -- a real class act. On the other hand, Koechli strikes me as "slippery," occasionally insisting one thing, while archive footage seems to prove another. At one point, LeMond says of his former team director, "Koechli tries to be smarter than he is. That's him re-making his own history." About Greg and Kathy LeMond, the two of them seem like such a cohesive team together -- Hinault once said that Greg was a better person with Kathy, and the film makes that ring true. Another thing about the film is that it is not all that long -- about  1:16 or so, so I wonder how much more might be covered by the book. I've decided that I need to read Richard Moore's book on which the film is based, so I put a copy on order.

Although it may be hard to find if one missed it (not knowing for sure if or when it will air again, or where else it might be available for viewing), I think Slaying the Badger would be worth the effort for cycling fans to watch.
Posted by Brooks at 11:46 AM