The Rise of the Importers

There's an interesting anecdote in Frank Berto's bicycle history, The Dancing Chain, that rivals some of the industry's best creation and innovation legends.

Mitchell Weiner, a West Coast sales agent, was trying to work out an agreement with Raleigh's American operations. American interest in lightweight "10-speeds" was just starting to increase (though the full-scale boom wouldn't kick off for another year) so his timing was quite good. The idea was to import a Japanese-built version of the popular Raleigh Grand Prix - to bear the Raleigh name and color schemes, and equipped with Japanese components. After production got started on the bikes, Raleigh's parent company in Nottingham suddenly killed the deal. You can't build a Raleigh in Japan, was their incredulous response. So Weiner found himself stuck with a couple thousand Japanese bikes painted just like the Raleigh Grand Prix.

So, what did he do? He got some new decals made, stuck them on the bikes, and sold them for handsome profit. The Centurion brand was born.

Weiner soon partnered up with a California bike shop owner, Michael Bobrick, and together they formed Western States Imports. As the bike boom accelerated, their Centurion brand was well-poised for growth. They also had the flexibility to respond to trends quickly. Soon after the bike boom ended, when the BMX craze hit, WSI was on the trend quickly with a new label, Diamond Back (later modified to "Diamondback"). In the early '80s, as mountain bikes began to transform the industry, Diamondback was quick to expand into that new market as well. Through its Centurion and Diamondback labels, WSI would become a big player in the American market, selling good quality at an affordable price.

In 1975, another new player in the industry was getting his start as well. The bike boom had just ended, but the American market for lightweight multi-speed bikes for adults had blossomed to become a much bigger share even after the bubble burst. During the boom, the bulk of sales was in the low-end part of the market. After the boom, interest grew in better quality, higher performance bikes. Mike Sinyard started importing better Italian components from brands like Cinelli and Campagnolo, for dealers on the West Coast. By the end of the decade, his new company, Specialized Bicycle Imports, was bringing in high-quality parts from Japan. More and more of the components were being made to Specialized's own specifications and bore the Specialized brand name: cranks by Sugino, pedals by MKS, headsets and bottom brackets from Tange/Sekei, bars and stems from Nitto. Though most of the components bore familial similarities to other products from their respective makers, they were by and large Specialized-specific designs. One of the company's first big successes was in tires, where their Turbo line became some of the first high-performance clinchers to seriously challenge tubulars. 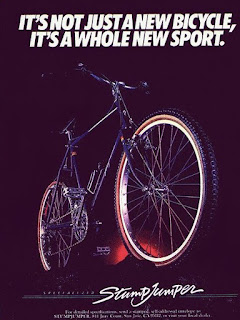 In the early 1980s, Specialized expanded to importing whole bicycles. These bikes included the Allez racing bike and the Sequoia sport-touring bike. The Expedition grand tourer followed soon after. But the one that really caught fire was the Stumpjumper, introduced in '82 -- one of the first mass-produced mountain bikes to hit the bike shops. Up until that time, the only way to get a real mountain bike was to have it custom built (probably by Tom Ritchey) and expect to wait a few months for it and pay well over $1000. The first shipment of Stumpjumpers, built in Japan with a price of around $800 - $900, sold out almost immediately, and the line soon expanded to include the Stumpjumper Sport, then the Rockhopper, and later the Hardrock, each aimed at a progressively lower price point. It wasn't long before everyone had to have a mountain bike.

These early '80s Specialized bicycles had lugged steel frames and featured wonderful workmanship for the price. Their frames were sourced from several different companies in Japan. Some of the first Allez racing frames were actually built by Yoshi Konno, known for his high-performance 3Rensho brand. The Miyata factory built a lot of Specialized bikes in the early '80s. The early Stumpjumpers were built by Toyo, which in more recent years would make some models for Rivendell.

Both WSI and Specialized had something in common in the way they established a business model that would eventually sweep the industry. Neither was actually a manufacturer in the traditional sense. There were no Centurion or Diamondback factories, and no factory bearing the name Specialized either. Never was. Never would be. Both companies essentially designed products to be manufactured by someone else, and which would be stamped, painted, or emblazoned with decals bearing the logo of the companies that would market the goods. And the actual suppliers could change from one year to the next, or from one product line to another, and the consumer would never know. By keeping no actual manufacturing plants of their own, having no machinery or tooling to maintain, and by using a variety of Asian suppliers, these American-based importing companies gained a lot of flexibility, which combined with good market instincts probably accounts for why they were able to quickly respond to the market trends.

On that point, I'd like to interrupt myself for a moment. I don't want to dismiss the active role that these companies played in bringing out great products even though they didn't actually manufacture them. Specialized, particularly, hired noted framebuilders like Tim Neenan, Jim Merz, and Mark DiNucci to design their frames and components. These men and other product specialists with the company spent a great deal of time in Japan (and later Taiwan and China) working closely with the suppliers to make sure that the products were first-rate. I think that's one of the reasons why they are so well regarded even today.

So, wasn't this the same thing that companies like Schwinn were doing? Yes and no. When discussing the role of imports on the market, Schwinn really got the ball rolling by importing bikes from Panasonic and Bridgestone, which were two well-established companies in Japan, and re-labelling them as Schwinn World Travelers, LeTours, and the like. But by going with these well-established manufacturers almost exclusively, Schwinn didn't get quite the flexibility that WSI and Specialized would enjoy, and that would be a factor that would hurt them later on. It didn't help that Schwinn's top management became complacent enough to dismiss the trends they should have embraced - but that's another installment in the series. Even more to the point, Schwinn was still predominantly a manufacturer, with a massive factory and with a long history of actually building bikes. The imports helped augment or supplement Schwinn's own manufacturing capacity, but was not a stand-in for it - though that would change.

There's another element to the role American importers played in changing the balance of power in the bicycle industry. And here, one should look at Schwinn, Specialized, WSI, and anyone else placing their branding on imports from Asia. As already mentioned, engineers and product specialists from these American companies worked closely with their Japanese counterparts, sweating details, and making sure the quality was top rate. The Japanese quality was already very good, but the cooperation with these importers, and the demands they made, pushed the Japanese makers to even higher levels, and helped them grow into a position of power. The income they got from their American dealings didn't hurt either.

But it doesn't end there. Japan's domination would be short-lived.

When the Yen swelled in value against the Dollar in the mid-'80s, Japanese manufacturing was no longer the bargain it had previously been. Importers had to find cheaper suppliers to protect their profit margins. The first place they turned for cheaper labor was Taiwan. At first, the quality of the Taiwanese products wasn't up to the level that Japanese goods had been, but with help and input from the designers and engineers from the importing companies, they were able to close the quality gap. In turn, the Taiwanese bike industry experienced tremendous growth and improvement. One of the major beneficiaries of this cooperation was Giant, which would eventually grow to become a household name and one of the largest bicycle companies in the world. Japanese bicycle and component companies were also turning to Taiwan to lower their costs, the same way American and European manufacturers had turned to Japan in the previous decade. The Taiwanese industry grew to the point that by the end of the decade, and into the early '90s, the story was repeating itself.

The industrial growth of Taiwan meant that it was no longer the cheapest source of bikes and components, and so the importers started looking to mainland China. Just as was done in Taiwan, bike and component makers started flooding China with orders, and the factories there, which previously had been building inexpensive, heavy, basic-transportation bikes for the home market, had to start gearing up to make the kinds of lightweight, higher-tech bikes that Western markets wanted. Even Giant in Taiwan would open a plant in China.

Most bicycle brands today, even those with prestigious names and those that built their reputations on their own workmanship, have shifted to the same "design it and import it" business models described above. Pick up almost any bike in any bike shop with any brand on it, and chances are, that bike is made under contract by a company like China Bicycle Co., Giant, Merida, or one of a handful of other suppliers. Even the American giant Trek has the majority of its bicycles built in Asia by the same factories that build their competitors, despite their heavily marketed "Made in America" image. Trek's huge Waterloo Wisconsin facilities primarily house marketing and research & development -- only a handful of their top-of-the-line models are made there, accounting for about 1% of their total production. Other notable brands, like Cannondale, were simply swallowed up by huge conglomerates with no interest in running manufacturing facilities, and their production has shifted to Asia as well.

By the 1990s and up to the present, factories in Taiwan and China would be producing the vast majority of the bikes sold in America and around the world. And these companies have grown to such a position of power that they could start buying sizable shareholder stakes in the very same companies that they are both building for, and competing with. Think about that when you're in the bike shop trying to decide between bikes from two different brands -- they could actually be the same bike from the same factory, different only in the decals.
Posted by Brooks at 11:35 AM