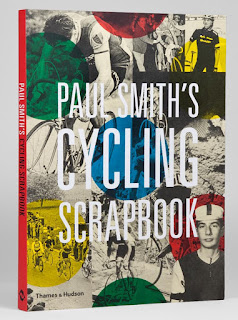 "Cycling has always been the sport for me," writes noted fashion designer Paul Smith in the Prologue of his new book Paul Smith's Cycling Scrapbook -- an aptly named exhibition of all things cycling from a lifetime of collecting. Jammed with hundreds of photos, artwork, and stories, Smith's book describes his love and fascination with the sport's legends, the bikes and equipment, its ephemera, and even its "look" -- all of which have influenced and inspired one of the world's most successful and celebrated designers.

Many people probably already know the backstory on Smith, who raced with the cycling club scene in England's midlands in the early '60s with ambitions of being a professional racer until a bad crash put an end to that dream. During his lengthy recuperation, he discovered the world of art and design, which opened up a new ambition, effectively changing the direction of his life -- but cycling always remained a special part of it.

The large format volume (approximately 10 x 14 in. and over 250 pages) is divided into a number of chapters, such as The Heroes, The Look, Great Races, The Jerseys, My Bikes, and more.
Paul Smith's Cycling Scrapbook, (published by Thames & Hudson) is a "must have" for any vintage cycling geek, but the text is written in a way that would appeal to anybody interested in a behind-the-scenes look at a famous designer's motivation and inspiration. The book lists for $50, but can be found for less through online retailers.
Posted by Brooks at 9:32 AM