The LFN "Totally Different" Bike is on Kickstarter (the LFN stands for "Looking For a Name" -- No, really. You can't make this stuff up), but for some reason isn't anywhere close to meeting its fundraising goal with only days left to go. As of this posting, they've raised only about $1,800 of a $100,000 goal.

It's billed as "The only bike that lets you climb a mountain without the mountain." I'm not sure what mountain climbing has to do with this thing, since nothing about it makes me think mountains, or climbing -- unless it involves climbing stairs. Maybe somebody wanted to combine a stairclimber machine with a bike, not that there's any logic in putting those two things together -- I mean, when I'm on my bike, I never find myself wishing I could be in a gym on a stairclimber.

The LFN does away with a normal circular crank, and instead has pedals that move straight up and down in alternating strokes - kind of like a treadle drive. Treadle drive bikes are not new (they go back to the very earliest days of bicycles, even pre-dating the safety bicycle) though the specific layout of this one is a little different than most I've seen -- the pedals move in tracks, as opposed to levers, but the biomechanical function must be similar. Nevertheless, such designs are inherently less efficient than a traditional crank when it comes to propelling a bicycle -- that is, in converting leg motion into the circular motion of a wheel.

Here's something on the subject from the late Jobst Brandt, patron saint of all retrogrouches:

"The main problem is that the invention is based on constant-velocity lever pedals, instead of circular cranks on which the rotating foot presents no inertial problems and on which the leg moves in sinusoidal motion." Brandt was referring specifically to a treadle-drive bike called the Alenax, but the critique would be the same. He continued, saying that such a drive "requires the foot to reach full speed from a stop before it catches up to the load it is trying to propel, after which it must stop suddenly from full speed at the bottom of the stroke."

Older readers may recall riding little treadle-drive toy cars when they were young. We had one that was passed along through all the kids in my family. What I always remember noticing, even as a kid, was that pushing those pedals straight back and forth didn't work very well. One of the problems I noticed was that if you started pushing on one pedal before the other pedal reached the very end of its stroke, the forces on the two pedals ended up fighting each other and the little car would grind to a halt. I was probably no more than 4 years old when I decided that the little car had nothing on a bicycle.

Besides - what exactly is the proposed benefit of pushing the pedals up and down in a straight path as opposed to a circular one? The Kickstarter page doesn't really explain why "totally different" is "totally better." They do, however, claim that "the slider bars (that's their alternative to a crank) have 3 times more the resistance of the pressure applied when pedaling." I'm not sure what that even means. They also claim that "with the combination of gears in the gearbox, the LFN bike can ride faster than any regular bike, but we designed it to run similar in speed as a regular bike. We don't want riders to hurt themselves with a faster speed." Call me skeptical about the speed (or potential speed) claims.

As long as we're talking about not wanting to hurt riders, here's something else I'm trying like crazy to figure out about the "Totally Different Bike" -- the totally different handlebar ergonomics:

And of course it's also an e-bike. One with a head-scratching range of 52 mph (?) 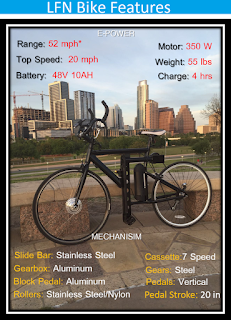 Here's another claim made on the LFN Kickstarter page: "We guaranty that our Bike is not on the market in any country, we dreamed it, designed it, developed it, patented it, and brought it to you to get your support." Spelling, grammar, and punctuation issues aside, I do sincerely believe this claim.

There's always the chance I'm being overly harsh on the LFN bike. Maybe there are hordes of people out there who would love to ride bikes if only the things felt more like a stair climber. If that's you, then better act fast before time runs out and the Totally Different Bike ends up in unfunded Kickstarter purgatory.
Posted by Brooks at 9:52 AM