A couple of days ago I got a question from a reader, Phil S., about this derailleur he found in a box of old inventory he got from a closed bike shop. Pictures of the derailleur were also floated around some of the bike forums and email groups hoping for some identification. It's left a lot of people wondering "what the heck is this thing?"
I took a few educated guesses about the derailleur and requested some more photos from Phil. I also checked some of the theories posted by other parties online - some guessing that it was one of Suntour's old pull-chain models - others guessing it might be some kind of Skitter variant. I was quite certain those were incorrect, even though the construction would lead one to believe it was from that same time period.

Looking closely, you can see that the unit is marked "Taiwan" which gives a clue. Suntour was bought out and merged with SR and moved to Taiwan in the early '90s. Could this thing possibly have been made as recently as the 1990s? It sure doesn't look like it, but that's a pretty compelling piece of information.

From the way the derailleur is oriented, it really appeared to me that it was meant to be mounted below the chainstay, ahead of the rear dropout. In that way, it would have a very straight cable path (one can see a cable stop mounted on the far right side) and would move in a roughly horizontal path in front of the rear axle. 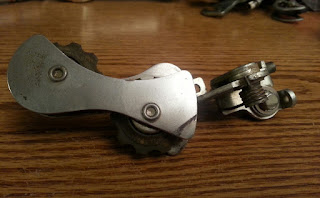 That kind of "backwards" orientation would not be unheard of for Suntour, which used a similar mounting location and orientation for its S-1 derailleur in the early '90s. As far as I know, that derailleur was standard equipment on only one bike, the 1993 Schwinn Criss Cross:

Using these derailleurs as a guide, I suspected that the derailleur was almost certainly meant for folding bikes, or perhaps some other bike where this under-the-chainstay mounting location would offer some protection.

Yet another clue comes from a fairly rare derailleur known as the Hole Shot:
I forwarded the photos of the mystery derailleur over to Michael Sweatman in the U.K., whose extensive derailleur collection is featured on the Disraeli Gears website. Though it isn't currently shown on the site, it turns out Sweatman has a nearly identical derailleur to Phil's mystery unit.

Sweatman has not been able to find a lot of conclusive information on the derailleur because it doesn't appear in any of the catalogs that he's explored. But he explained to me that there is a date code on the derailleurs (Phil's unit is marked "JF" - the other example is marked "JE") which he believes should translate to 1993. That places this mystery derailleur as a contemporary of the S-1, despite looking like it came from a much earlier era. The crude stamped construction on a derailleur made as recently as the '90s would seem to indicate that the derailleur was meant for really cheap, utilitarian bikes. I'd also suspect that the unit was not really intended for export, either. Obviously a few examples found their way out of Taiwan anyhow. 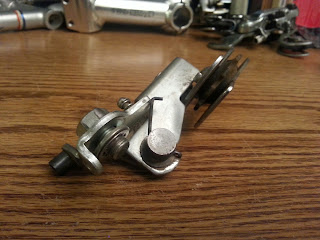 Sweatman confirmed for me my suspicion that the mystery derailleur was meant to be mounted below the chainstay, not unlike the S-1. He seemed to agree that the unit may have been meant for some folding bikes (probably really cheap, utilitarian ones). He also suggested it could have been for children's bikes. That makes a good deal of sense, and seems to match up to the 2-speed Hole Shot for BMX bikes.

Putting it all together, I think what we have here is the coelacanth of bicycle components: An anachronistic-looking no-frills stamped steel 2-speed derailleur; probably made either for children's bikes or utilitarian home-market folding bikes (or perhaps both); mounted under the chainstay ahead of the rear dropout; and made in the early '90s by Suntour shortly after being moved to Taiwan.

So, is the mystery solved? Well, not entirely. We still don't have a model name for it. And we can only make some educated guesses about its intended use. To me, though, the biggest unanswered question is why Suntour would still have been making something like this in the modern era - when it seems like such a step backwards?
Posted by Brooks at 11:27 AM