The midwest is currently trapped in some kind of tropic-like heat and humidity bubble right now, making any kind of outdoor activity a miserable nightmare. About the best thing right now is to stay where it's cool and watch the Olympics.

In cycling, the American men haven't done much of anything newsworthy, but the races have had their share of drama. Belgian Greg van Avermaet won the Men's Road Race after a crash on a fairly difficult descent took out several riders, including Vincenzo Nibali, who had been in a good position for victory. Chris Froome was hoping to get the Gold just weeks after winning his 3rd Tour de France, but it was not to be. He missed an important breakaway and finished 12th. Brent Bookwalter was the best placed American in the road race at 16th. Approximately 79 riders, including Taylor Phinney, did not finish the race - most due to crashes.

In the Women's Road Race, the same stretch of road that saw race-ending crashes in the Men's race was the site of a horrific crash with Dutch rider Annemiek van Vlueten. She had been in the lead on the descent of the Vista Chinesa, with under 11 kilometers to go, when the slick conditions took her down hard. Reports say she was unconscious for a long time afterwards, suffered a concussion, and had several spinal fractures. The sight of her lying motionless, crumpled on the side of the road was pretty disturbing. Thankfully, she is doing better and has posted updates on her condition.


Just behind van Vlueten on the road was American Mara Abbott who was suddenly in excellent position for Gold. However, exhausted and possibly a bit spooked by what had just happened to van Vleuten, Abbott was not able to hold off the group behind her. Abbott was passed with just 200 meters to go. In that group was van Vleuten's teammate Anna van der Breggan, who accepted the Gold with tears for her injured teammate. Emma Johansson of Sweden got the Silver, with Elisa Longo Borghini taking Bronze. Abbott had to settle for 4th. 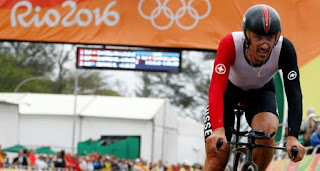 Fabian Cancellara, AKA Spartacus, won the Gold in the Men's Time Trial - a fitting end to his career as he is set to retire. Tom Dumoulin of the Netherlands took the Silver, and Chris Froome had to settle for Bronze. American riders Taylor Phinney and Brent Bookwalter were 22nd and 23rd respectively.

Again, just as in the road race, the American women gave us more to cheer about here in the States. Kristin Armstrong (and no, she is NOT any relation to Lance) proved her dominance in the time trial by taking her 3rd consecutive Gold Medal in the event at the age of 42. (She turned 43 the next day!). At some point along the course, Armstrong developed a nosebleed, but continued to push herself to the maximum. She lost some time in the second split of the course to Russian cyclist Olga Zabelinskaya, who just finished an 18-month ban from the sport for doping - so victory for Armstrong was a matter of honor. The American poured on the speed at the end to claim the win. The finish scene was pretty great to watch as Armstrong, her nose still bleeding, collapsed from the effort - then her son was lifted over the barricades so they could have an embrace. 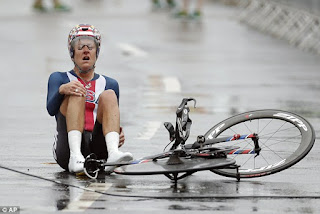 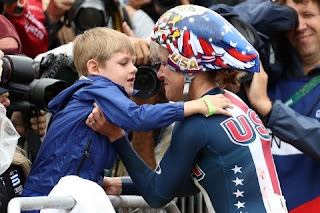 I think my favorite story, however, wasn't about the winners, but the person who took LAST in the Men's Time Trial, Dan Craven from Namibia. 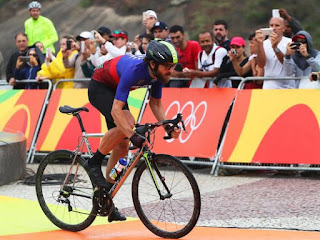 Looking a bit like Yehuda Moon with his full beard, Craven wasn't even supposed to compete in the time trial. But because there were so many riders unable to compete due to injuries sustained in the road race, the self-deprecating Namibian team member (who had also crashed out of the road race) was a last-minute substitution. He didn't even have a proper time trial bike. Apparently his first reaction upon being asked to race was to say no - concerned that it would be too embarrassing. But after a moment to think about it, and getting some advice from friends, he relented.

Craven was the first to leave the start house, and was caught along the course by one of the riders who left after him, but when he crossed the finish line, he was in 2nd place - at least for a moment or two.


What's great about Craven is that he came in last, yet it doesn't even matter. He was truly proud just to be able to compete. After the race, he told reporters, "Look at me. I'm talking to (you), standing here, wearing 'Namibia' across my chest. I'm such a proud Namibian. I love my country. The chance to do this. I can say I competed in an Olympic time trial."

Yep - that's probably my favorite story so far.
Posted by Brooks at 2:23 PM