Campagnolo Corkscrew to the Rescue

The Campagnolo Big Cavatappi corkscrew is probably regarded by a lot of people as an indulgence. A bike-geek/wine-lover affectation. Yes, I have one. What can I say? Bike-geek/wine-lover? That's me. And though it was awfully expensive for a corkscrew, as a lover of bikes as well as good wine, I figured that getting one was almost a requirement, and I purchased mine many years ago, before I had kids. An extravagance to be sure, but today I was really glad to have it. 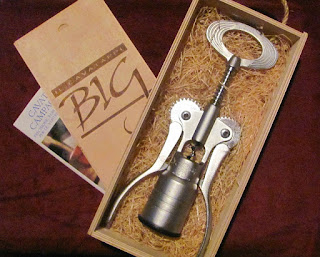 As wonderful as the Campy corkscrew is, I admit that it is rather big and maybe a bit overkill for most cork pulling duty. It usually comes out when we have company and a nice dinner - but most days and with most bottles I end up using a much more pedestrian puller: the simple $20 Screwpull, with its teflon-coated "worm" type screw -- the claim is that it should work its way into a cork without damaging it, and pull it out cleanly. Most of the time, that proves to be the case.

But in this instance, it wasn't going well. Opening a well-aged bottle of Chateauneuf-du-Pape, 2006, I found that the screw wormed its way into the cork just like it should, but when extracting it, the cork just started to crumble - the screw started pulling the middle right out of it, while the rest of the cork stayed firmly put.

Before I completely destroyed the cork, or while there was still enough of it intact to have any hope of success in removing it, I brought out the Big Cavatappi. The screw on the Campy puller is a pretty unique shape - not quite a "worm" type, but not exactly an "auger" type, either (if you have a brittle cork, those inexpensive auger screws are about as bad is it gets). It's a large helix-shaped screw, with sharp, almost blade-like edges, and it was able to work its way cleanly into the cork, but still get plenty of purchase on what was left of it. It pulled out the damaged cork smoothly and without tearing it further apart. I'm convinced that no other puller would have been able to do it.

I poured a glass, and the only evidence of the trouble was a single tiny flake of cork no bigger than the head of a pin. Considering the condition of the rest of the cork, I'd say that was way better than I could have hoped for.

So, how was the wine? Southern Rhone wine at its best. If too young, it can be pretty tannic. After 12 years in the bottle, it was nice and mellow. Excellent sipping on a cold February night. Even as I sit here typing this post and enjoying my wine, I feel the need to raise my glass to the Big Cavatappi's creator, Tullio Campagnolo. Cheers!
Posted by Brooks at 3:40 PM