Recently on the Classic Rendezvous group there was quite a nice run of posts about a great racer from the past, Eileen Sheridan. In the 1940s and '50s Sheridan was a time-trialing powerhouse who not only was one of the best female cyclists in the sport, but also gave a lot of men a real run for the money too. With all the posts and photos being shared by the CR friends, I couldn't help but feel inspired to gather more about her and share it here on the Retrogrouch.

Born in 1923, Sheridan joined the Coventry Cycling Club when she was still in her teens. Her main interest was originally just riding with the club and cyclotouring, which was a very popular pastime during the war - but after entering a club time trial, she found she had a natural talent for the competition. Throughout the '40s and '50s, time-trialing was the main form of racing in Britain, as Continental-style mass-start racing was essentially banned by the sport's main governing body, the National Cyclists' Union (NCU), and participation in mass-start races would get a rider banned from any NCU sanctioned events. Though she did also compete in some track racing, road time trials and timed point-to-point rides became her specialty.

Sheridan's official start in racing was in 1945 and she won her first National Championship in the 25-mile time trial that year. In 1947 she would set the record in the women's 50-mile, and improve her 25-mile record. By 1950, she would be the National Champion in the 50 and 100-mile races, and was breaking records in all the distances she raced. In her 1949 12-hour record, Sheridan rode 237.62 miles - which actually put her within only a handful of miles from the top-ranked men of the day. In subsequent years, she would improve on that one, too. 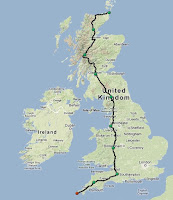 The Hercules Cycle Company hired Sheridan in 1950 as a professional rider, and her appointed mission was to break distance records (that, and sell lots of Hercules bicycles). Over the next three years, she would break the 12-hour record (250.5 miles), the 24-hour record (446.5 miles), and the London-Edinburgh record. In 1954 she broke the record for Land's End-to-John O'Groats, which famously traverses the entire island of Great Britain from end-to-end, which she completed in 2 days, 11 hours, 7 minutes. After arriving in John O'Groats, despite being terribly sleep-deprived and near complete exhaustion, she continued riding on to also break the 1000 mile record. By her third mostly sleepless night on the bike, she reported that she was at times weaving along the road, barely able to stay upright, and having hallucinations, but she finished the ride in 3 days, 1 hour - a record that stood for 48 years. Not only that, but she was only 2 hours, 20 minutes off the men's record at the time. All told, between 1945 and 1955, she broke 21 women's long distance and place-to-place records. Many of these stood for decades, some through the end of the century, and a few of them, such as her London-Liverpool and London-Edinburgh runs, still stand today. 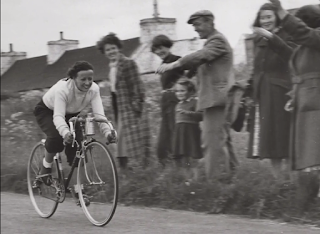 Prior to her Hercules sponsorship, Sheridan rode a few different bikes. I saw an interview on CyclingUK where she mentioned and old BSA that she started out with, and a Claude Butler that her husband bought for her when she first began racing. And searching the internet, I spotted a couple of photos of her racing on a bike built by Mercian. But she's mainly remembered for her Hercules deal.


Female athletes have long had to battle with indifference and sexism, and it was certainly no different in Sheridan's day. The thing is, Eileen Sheridan, and many women like her, really deserves tremendous credit considering that, unlike most male athletes, she really was expected to balance her dedication to her sport with the "duties" of a wife and mother. Sheridan gave birth to a son in 1946, right after her first season as an amateur racer. Within months, she was back on the bike to pick up where she'd left off. Her second child, a daughter, was born in 1955, right at the end of her contract with Hercules, and at that point, having broken all the records that were available to be broken, she decided against renewing it. Difficulty in regaining her earlier form was also a factor in the decision.

On YouTube, you can find a brief clip from an old British Pathé newsreel about Eileen, "The Housewife Cyclist." The sexist and patronizing tone is kind of hard to stomach, but gives a good idea of the attitudes that female athletes like Eileen probably had to fight every day. The newsreel clip opens with a shot of Eileen feeding her new baby daughter . . . 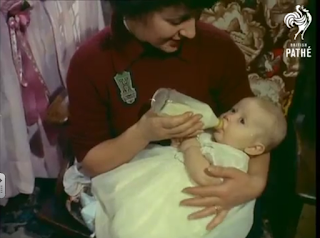 Then goes on to show her training in her garage gymnasium . . .

Sheridan has said in interviews that she would have loved to have been able to compete in the Olympics. The indifference that female athletes faced (and still face) meant that there was no women's cycling in the Olympics until 1984. And even now, the UCI has limits on their support of women's racing, and indifference by advertisers means a lack of coverage of it on television.

After her amazing John O'Groats ride, and while pregnant with her second child, Sheridan wrote her autobiography, Wonder Wheels. It was released in 1956. I believe the book is no longer in print, but it was re-issued briefly about 10 years ago. Used copies seem to be available if one knows where to look.

There's a very nicely done short documentary about Eileen called Come On, Eileen, directed by Anthony Collins in 2014. It seems that I am unable to embed the video right here, but it can be found on the Vimeo site, and here's a link: https://vimeo.com/98539448. The film combines archive footage, photos, interviews, and some dramatic re-enactments to tell Eileen's story. It's only about 20 minutes long, and well worth watching.

As I understand, at 94 Eileen still remains at least somewhat active in the cycling community - attending special events when she can, and she was for many years the president of the Coventry Cycling Club. She provides inspiration for a lot of female cyclists, particularly those who are now breaking (or at least attempting to break) some of her great records.