Sometimes a person can't help but find himself (or herself) in an ironic/nostalgic mood where they feel compelled to wallow in a cheesy '80s pop music video masquerading as a gritty drama about plucky street-smart bike messengers making their way through the big, dangerous city. And when that ironic/nostalgic mood strikes, there aren't a lot of 80s pop music videos masquerading as gritty dramas about plucky street-smart bike messengers out there to choose from, but Quicksilver (1986) is one of them.
Fresh off of Footloose Kevin Bacon, who can be linked to nearly every actor in Hollywood by fewer than six steps (see Six Degrees of Kevin Bacon - yes, it's actually a thing) plays Jack Casey, a hot shot stock trader ("one of the best" supposedly) who, in the first five minutes of the film, loses everything in a single risky gamble. 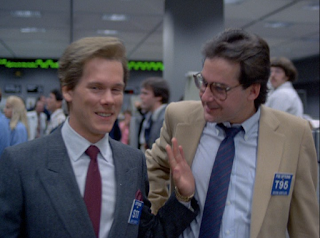 And of course he also blew his father's whole retirement savings in the same inexplicable gamble. The scene where he breaks the news to his dad is one of the few moments with any emotional heft in the film.

So rather than picking himself up and trying to rebuild himself (like his stock trading partners all seemed to have been able to do), he spends a lot of time aimlessly walking the city's crowded streets and growing out his hair. . . 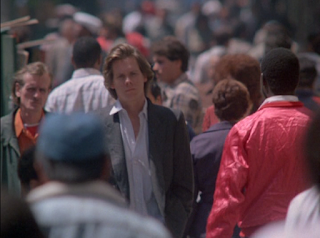 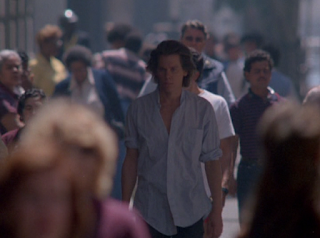 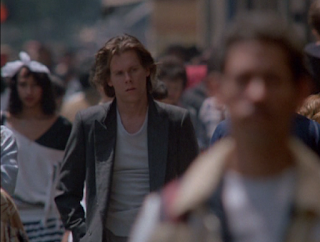 Until he has an epiphany in front of a second-hand store:

It's redemption by bike, which I guess a lot of us can kinda' relate to.
Because it's an '80s movie, we have to have a whole lot of dance sequences to go with the high energy pop soundtrack.

Most of the film was shot in San Francisco, though I understand a few bits were shot in LA and NYC -- to give the film sort of a generic un-specified urban setting. One of the few scenes that makes the location obvious is the mano a mano messenger race between Kevin Bacon's Jack Casey vs. Laurence Fishburne's shady badass "Voodoo." 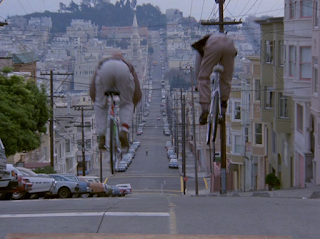 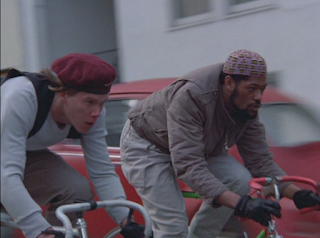 There's a whole sub-plot in the film where messengers like Voodoo get caught up running drugs for "Gypsy," the local bad-guy drug dealer (who is almost never seen outside of his POS Ford sedan), and of course that doesn't work out well for any streetwise messenger who goes in for earning the fast easy money.
There's a whole cast of lovable oddball characters, mostly with clever nicknames. Like Franz -- aka "Tour de Franz," "Apache," "Voodoo," "Airborne," and "Teddy Bear." Except for Jack, who is just, well, "Jack."

Bacon's Jack Casey has a lot of angst about his stockbroker past, and tries to keep an air of mystery about his background with the other messengers, except when trying to help them occasionally with sound financial advice. But stockbroker-to-bicycle-messenger isn't the typical "American Dream" career trajectory, so of course he frequently finds himself at odds with people's expectations.

But when Jack learns that his friend Hector might make a big dangerous mistake to get the money for his hotdog cart, he decides to drop in on the Stock Exchange for some redemption. Before you know it, he's in there mixing it up with the hotshot stock traders again . . .

And that's all it takes to get other stock brokers to start acting like sheep. Pretty soon all the traders are following his lead, bleating the same thing . . .

While he's at it, Jack also manages to make enough to rescue his father's retirement fund, too. Oh yes - getting rich at the stock market never looked easier!

But that's not enough of a climax for the film, because Gypsy, the bad-guy drug dealer, is after Terri now, which leads to a final showdown.

So now Jack leads the bad-guy on a car vs. bike chase.

The whole chase scene ends about as well as it can for a guy who intentionally runs over a bunch of bicycles with his POS Ford.

Oddly enough, after spending an entire film being encouraged that being a bike messenger is a great job for independent mavericks, in the end, all three of the main characters are found doing something else. Jack's got a "couple of real good offers" (in what, he doesn't say), and Terri's going to be a paramedic. And then they run across another old friend. . .
Quicksilver is loaded with technical goofs and continuity errors. The sudden onset of daylight in the final chase is just one. Here are some more:


Speaking of the bikes, Raleigh USA, which was actually American Huffy with a British name placed on bikes made in Japan and Taiwan, must have put up some money and/or other support for the film. Most of the bikes used in the film (or at least the ones that can be seen with any clarity) are Raleigh USA models from about '84 - '85.

I understand that Nelson Vails (who was sponsored by Raleigh USA at one point) did offer some technical advice for the film, and provided some insight on the life of bike messengers. Also, Kevin Bacon spent about four months prior to filming training on a fixed gear track bike - some of it riding with a former messenger (who was also one of the screenwriters) in NYC - to get ready for the role. I give him credit because there are several scenes in the film where he performs some tricks or stunts on the bike, and it's clearly Bacon and not a stunt double.

When Quicksilver came out in 1986, it opened to mostly lackluster or downright negative reviews.

Roger Ebert wrote: "Quicksilver is a collision between realism and gloss, between a story that demands to be told at street-level and a style that looks inspired by music videos. The movie has moments when it comes to life, when it threatens to tell a story about interesting people, and then it wanders off into inane scenes designed only to sell records."

Walter Goodman of the New York Times wrote: "As long as the characters are doing stunts or whizzing impossibly through city traffic to a strong rock beat, there's something to watch. For the rest of the time, Quicksilver is as much fun as a slow leak."

And currently, the movie rating website Rotten Tomatoes gives the film a 13% on their Tomatometer. By comparison, Bacon's 1990 film Tremors, which I believe was intended to be an ironically bad tongue-in-cheek sendup of 1950s B-movie monster flicks has a score of 85%. Kevin Bacon himself is reported to have called Quicksilver one of the lowest points in his career.

I was a student at Kent State when the film came out, and I remember our university bike club hosted a screening of the film. We actually enjoyed it - or rather, we enjoyed ourselves mostly poking fun of it. But fun is fun.

Needless to say, Quicksilver is hardly a must-see movie. But sometimes cheesy bad can still be fun. And if you're looking to satisfy that itch where nothing but an 80s pop music video masquerading as gritty drama about plucky street-smart bike messengers will do, what else are you gonna watch?
Posted by Brooks at 11:22 AM