Tired of hearing about "1x" drivetrains, dropper seatposts, fatbikes, mid-fat, enduro, gravel, and more? Do you even know what people are talking about when they're debating "36 vs. Pike"? Honestly, I don't. And so the short film, Lego Bike Shop, created by Devon Brown for Oxburger Studios, is a wry 2-minute comment on the current state of the bicycle industry that will appeal to any retrogrouch.

First off, understand that in the world of Lego building bricks, there is only one "bicycle." It comes in a rainbow array of colors, but they're all basically the same little bike: 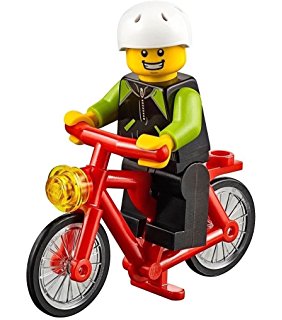 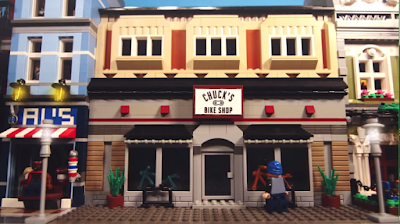 Where in walks a little hipster guy who wants a new bike . . . 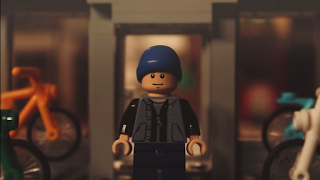 The Lego hipster has done lots of reading online and is very impressed with "how far the technology's come in the past little while."
The salesman then goes on to show all the great features of the Lego bicycle, which as already mentioned, are all essentially the same.

It's a real splash in the face of reality when you live in Lego world. It gets me thinking about how the magazines and industry-cheerleading websites can convince us of all the new technology that we "need" in order to enjoy riding a bike - when really, most of it just comes down to marketing hype.

It's only two minutes long, and it's good for a laugh:

This past weekend I managed to get out with my new Mercian 753 Special, just recently completed, and I got to enjoy it with a group of fellow vintage bike nuts in Michigan.

Dubbed the Michigan Steelhead Ride (after the popular game fish) the ride was organized by a Retrogrouch reader, Jim T., who is also a friend on the Classic Rendezvous Google Group. Although driving about four hours (from Akron, Ohio to Lansing, Mich.) is a long way to go for an informal bike ride, I'd been looking forward to getting out with some like-minded retro riders now that winter seems to have relinquished its hold on us. There wasn't a huge group to ride with - about eight guys altogether - but there were some nice bikes to enjoy and swap stories about.

The group met at a nice little café in the quiet town of Dewitt, just a few miles north of Lansing. There we had a tasty breakfast - corned beef hash seemed to be popular with the group, and the coffee was quite good. The folks at the Family Tree Café were kind enough to allow most of us to keep our cars in their small parking lot while we went for our ride.

Weather was kind to us. We had beautiful clear skies, but a bit of a chill in the air with only about 45 degrees when we were ready to depart. Almost everyone on the ride had some vintage wool to wear, but most of us also had a light shell to throw on for the first half of the ride. It was one of those mornings where it felt too warm with the shell, but too cold without. But the temps rose as the ride continued, and by the half-way point, most of us were stuffing the shells into our back pockets. I think it must have gotten into the mid 50s by the time we got to the end. Jim had named the ride Steelhead - but I joked we could have called it the "hockin' phlegm" ride since the cool air, combined with the fact that a lot of us were probably getting over colds, meant there was expectoration a'plenty. Sorry - too much info?

The roads were in decent shape, though there were stretches where winter's freeze and thaw had thrown some cracks and holes in our path. Traffic was fairly light on the whole, and the group kept a nice pace and mostly stayed together. Occasionally some show off would take off on a sprint to the top of a climb (alright, that was me), or we'd wait up at an intersection for one or two folks to catch up. Really though, it was a good group of riders. Along the route we found a little bakery that had some fantastic oatmeal raisin cookies which were worth the stop.

As mentioned, there were some cool folks on the ride, and some fun bikes to enjoy. Around the mid point we stopped for a break at a little gas station/party store (called Spagnuolo's - a name that reminded us a little of Campagnolo) and I snapped some pictures of the bikes:


As I mentioned, this was an inaugural ride for my new-old Mercian. I was really curious about how the bike would ride. A couple of impressions: it is stiff, and the angles are pretty steep, so it's very responsive. It does have decent compliance, but it's always been hard for me to tell if something like that is more from the frame or from the tires. I can certainly say I wouldn't want to go narrower on the tires. The tires I chose for the bike are Schwalbe One tubulars, and they are listed at 28 mm wide, but in reality they probably measure more like 26 or so, at least for now. There's plenty of clearance under the fork crown and the seatstay bridge for them, but between the chainstays, it's pretty clear I couldn't go any larger. I'll have to always make sure my wheels are nice and true.

I've also decided that the vintage Cinelli Campione del Mondo (mod. 66) bars have a really deep drop -- yes, I knew they were deep when I installed them, and I put them on because (A.) I had them available in my stash, and (B.) they seemed to fit the "theme" and "period" of the build that I was after. But in actually riding with them, I'm reminded that I'm no longer as young as I used to be, and I really just can't ride very long in that low position. I spent most of the ride up on the ramps and the lever tops. I may have to set those bars aside and put on something a little "friendlier" to my current riding requirements.

The bike got many compliments for its Emerald, Ruby, and Gold paint scheme, as well as the "like-new" Campy Super Record gruppo.

When we finished the ride, the group hung out for a while until people needed to move on for the day. A few of us stayed after and re-visited the Family Tree Café where we had either a late lunch, or an early dinner. The waitress recommended their burgers, and all of us took her advice. She was right, as the burgers were truly first-rate, as were the fries. I also got to try Bell's Oberon ale from Kalamazoo, which was a nice discovery for me, and I need to look around to see if anyone near me carries it. It was a great complement to the burger.

Eventually I needed to head home, facing another four-hour drive back to Akron. It was nice meeting some folks up in Michigan, and I had a really good time.
Posted by Brooks at 5:41 PM 9 comments:

The 2017 Giro d'Italia begins on May 5th and will be the 100th edition of Italy's famous grand tour. Just in time to mark that special milestone, Pursuit Books has just released Colin O'Brien's Giro d'Italia: The Story of the World's Most Beautiful Bike Race. O'Brien is an Irish writer, currently based in Italy and is a regular contributor to Rouleur magazine. 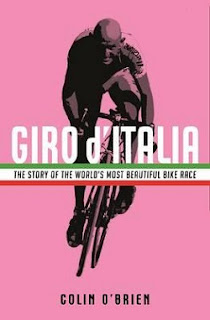 There are many books on the subject of the Giro, and I'm not sure how much there is to set O'Brien's book apart from the others that are out there, but I really enjoyed reading it. Though the title may imply that the book would be a near encyclopaedic account of the race's history, it actually is nothing of the sort. Rather, it mainly follows the history of the grand tour through some of its great heroes, its duels and rivalries, and occasionally through a look at some of its great mountain passes.

From a fairly detailed look at the race's somewhat humble beginnings, the book chronologically covers some of its first champions, like rivals Costante Girardengo and Alfredo Binda (the latter of whom was the first 5-time Giro champion, a seemingly unbeatable force from 1925 to 1933), later Coppi and Bartali, Merckx and Gimondi, and on to Saronni and Moser by the end of the 1970s. Some of the book's chapters look at the relationship between the race and the politics of the day - for example, the rise of Fascism in Mussolini's government, and its effect on the race and its athletes, including the famous Ottavio Bottecchia, whose death may have been politically motivated.

I think some of my favorite chapters of the book come in the latter half when the race takes on more of an international flavor - with the introduction of the American 7-Eleven team and others. These latter parts of the book feature extensive interviews with some of the Giro's living champions, like Andy Hampsten and Stephen Roche. I don't think it would be possible to read Hampsten's account of his 1988 Giro win without being convinced that he is one of the most humble, genuine people to come out of professional bike racing. Yes, the story of his unforgettable ride up the Gavia Pass in appalling conditions is one I've heard and read in many sources, but there's no doubt that it's a fantastic story and will long live as one of the great legends of the Giro.

One mild critique I have is towards the end of the book where one fairly brief chapter deals with the difficulties of believing in professional racing in today's world of doping scandals. I almost feel that O'Brien goes out of his way to sweep the doping issue away, and is almost too eager to point out that the old champions, like Coppi and Anquetil were doping too. And a modern-era racer like Marco Pantani is glorified despite the fact that his "beautiful" performances in the mountains were almost certainly fueled as much by EPO and steroids as by heart and soul. I still have a hard time with the beatification of Pantani. I pity him as perhaps a pawn in a game, used and used up by people with far more power, money, and influence, but undoubtedly another major reason why racing today has such a serious credibility problem that will kill the whole sport the same way it killed Pantani.

Despite that (again, minor) criticism, I do recommend O'Brien's book about "the world's most beautiful bike race." I think Retrogrouch readers would enjoy it, and I definitely would pick up a copy before the 100th race takes off from in Sardinia, on its 21-stage journey back to Milan.
Posted by Brooks at 11:25 AM 2 comments: