I wrote some months back that I've been testing a Brooks saddle - specifically a B17 "Imperial" or "carved" model. That's the one with the big "pressure relieving" hole cut into the top. I've been using the saddle since August, and have put well over 2000 miles on it and can report a few observations. 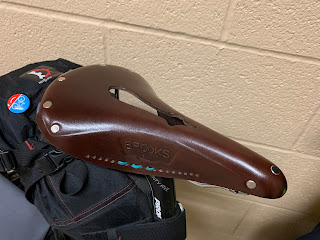 First - the saddle still looks beautiful. The leather barely has any signs of wear. I did apply some Brooks Proofide before installing it on the bike, and I've used a cover whenever I've encountered rain, which I'm sure has helped protect it. But really, it hardly looks like it's been used. The chrome on the undercarriage is keeping its lustre. Like most Brooks saddles, it is, and remains, a thing of utilitarian beauty. The chromed rails (as opposed to painted, as on a "standard" B17) mark it as a deluxe model. The contrast between the rich brown leather and the gleaming chrome gives the saddle a luxurious look.

As far as comfort goes, something I've noticed is that the saddle remains quite stiff or hard, even after more than 6 months of regular use. It's almost as if it is taking longer to break-in than what I've experienced with other similar (non-carved) Brooks saddles. I'm curious as to whether this saddle has a different quality leather from what they use on standard B17 saddles. Maybe a tiny bit thicker? I have no way of knowing for sure - but I do suspect there must be something different about it. The Imperial model has been around for more than 10 years, so I can't understand why Brooks would be asking people to conduct long-term tests on one unless they were doing something different with it - and since I can't see anything obviously different, I can only suspect it may be something harder to detect. Different leather might be the thing. 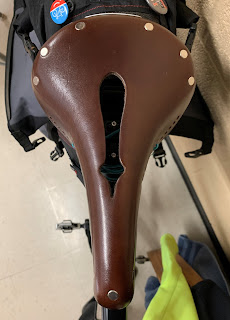 Having said that, there could be another reason the saddle has remained so stiff. The laces along the bottom really keep the lower sides of the saddle from flexing, which in turn keeps the top firm. People will sometimes lace an older sagging saddle in the same manner to firm it up. Lacing a new saddle is probably overkill. The thing is, I typically find B17 saddles to be reasonably comfortable right out of the box, and they only get better as they break-in. This one doesn't yet seem to "disappear" underneath me as my other saddles do. I have loosened the laces on this example to allow some more of that flex that I've come to appreciate. That has helped some - but I'm considering removing the laces entirely to see what difference that makes to my comfort.

OK - so what about that big hole in the top?

Some readers may recall that about 20 (or so) years ago, some doctor published a study in which he connected frequent cycling to erectile dysfunction in men. The article was widely publicized in mainstream magazines, newspapers, and even on television talk and news shows. Even though the study's findings have since been called into question, if not flat-out refuted, the result is that many saddles today come with slots, holes, channels, or grooves in the top that are designed to reduce pressure on the blood vessels and nerves that travel through the perineum. 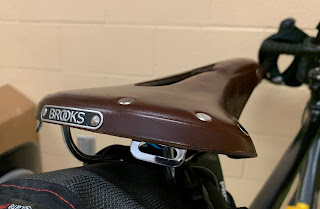 I for one have always been skeptical of the scare stories about impotence and the claims about "safer" saddle designs. In some cases, I've even questioned whether some "grooved" or "channeled" saddles might not be prone to do more harm than good. No, I can't perform a scientific study on it - but just looking at some of the designs, it simply strikes me that some "channeled" or "grooved" designs replace one large, broad pressure point with two much smaller, sharper pressure points, and I'm not sure that would really help the issue.
So back to the Brooks . . .
When I first looked at the saddle, I wondered if I'd even be able to notice the hole, much less whether it would it make any difference in comfort. After getting on the bike and riding a few miles, I started thinking - was it my imagination, or could I actually feel that hole? But I don't mean in a good, "pressure relieving" way. I mean, I thought I was feeling the edges of the hole - like digging in. After more miles and more days, weeks, and months of riding, I was certain of it. The edges of that hole were causing some chafing, even with padded cycling shorts. I had hoped that as the saddle softened up, that sensation would go away, though as I've already mentioned, the saddle still remains quite stiff so I'm still waiting to see if that happens. I'll remove the laces, free up the top to flex more, and maybe that will help. But what I'm struck by is that I'll get out for a ride on another bike with a standard B17 (and by the way, this can include saddles with similar mileage on them, or not that much more) and feel instantly comfortable with no fussing.
I've still got some time with the Brooks Imperial, and I remain open to the possibility that with more break-in miles, that it could match the comfort of the more traditional saddles I'm accustomed to. But so far, my impression is that the standard "non-carved" B17 is hard to beat, and I'd be willing to bet that would hold true even if someone truly was concerned about perineal pressure.
Oh yeah - one more thing. . .
Back in August, when I first wrote here in the blog about receiving this test saddle from Brooks, I mentioned that I had noticed an odd thing. Brooks leather saddles are notably still made in England, even though Brooks is now owned by the Italian company Selle Royal. When my saddle arrived, I saw that it had come shipped from Italy. I've since then learned the story. The leather saddles are indeed still made in the English factory (the non-leather saddles may be made elsewhere, though I'm not certain where) but they are then shipped to Italy for distribution. This arrangement is causing a bit of a flap now in post-Brexit Britain. Brooks has no distribution within Britain -- it is all handled through the parent company in Italy. That means that the saddles are made in England, shipped to Italy, and then (for U.K. buyers) have to be re-imported to the U.K. Post-Brexit trade, tariff, and tax issues with European Union imports means that U.K. buyers are having problems getting their hands on Brooks saddles, even though the saddles are made in their own country. What a mess.
If anything changes my impression of the saddle, I'll be sure to give an update.
Posted by Brooks at 11:21 AM 6 comments: 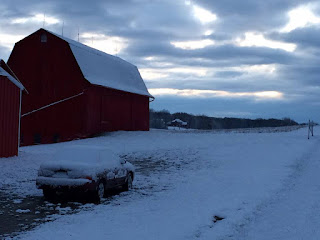 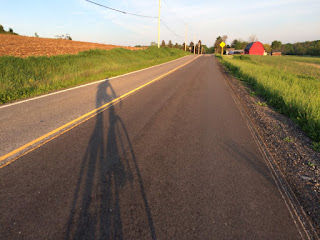 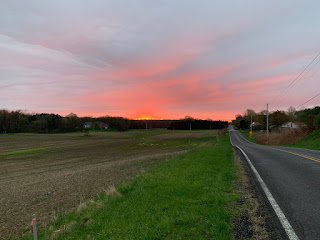 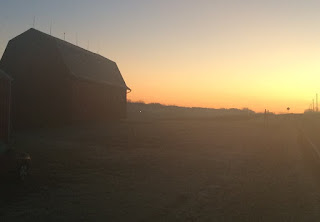