I recently spotted these new cranks from FSA, the K-Force Light -- which have the distinction of being not only eye-wateringly expensive, but also, eye-wateringly ugly. In fact, they probably incorporate everything that a Retrogrouch could possibly loathe. 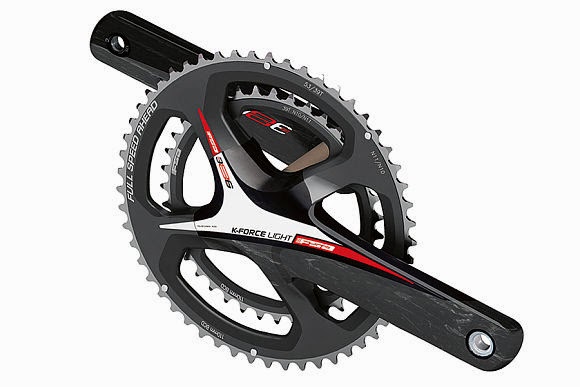 According to articles I've seen, the crank is listed at £599, or $750, which is obviously a lot of dough, particularly considering its Taiwanese origins. But also, it raises a question about component and bicycle pricing that I've wondered about before -- whenever I see prices listed in £British and $U.S., they never bear any relationship to exchange rates. Currently, £599 should be over $1000. I don't get how that works, but I suspect someone's getting screwed. But I'm digressing. . .

Like Shimano, and now Campagnolo, the new FSA crank goes to an asymmetrical 4-arm spider, but of course (because this is the bicycle industry we're talking about) the chainrings are not compatible with either Shimano or Campy. In fact, they aren't really a 4-bolt chainring, as there is a 5th bolt hidden behind the arm (which is nestled between the more closely-spaced spider arms, making the 5th bolt pretty superfluous). The 4-arm spider gets touted by Shimano and their converted disciples as a "major improvement" in crank design, and I've read blog and forum comments from the converts proclaiming improved stiffness and "unprecedented power transfer" -- which just proves to me that a lot of people are completely full of s#!%. It also means everyone has to copy it -- but not copy it so much as to make any part of it interchangeable.

The new K-Force Light is made from carbon fiber with hollow arms, so you know it will stand up to hard use. It also has the huge, bloated look of many of today's components, along with graphics that look like something out of Japanese animé cartoons.

As another bonus, the crank comes with the BB386EVO bottom bracket -- which is another of the multiple new bottom bracket standards to be released in the last few years, and requires spacers and adapters in order to fit into frames that aren't designed specifically for it (which, of course, is probably most of them). And like most of these new press-fit bottom bracket "standards," the only thing that's actually "standard" is the creaking that comes when the various spacers and adapters don't really fit right.

So, what do we have here? A stupid-light carbon fiber crank that's incredibly expensive, obnoxiously ugly, with yet another proprietary chainring pattern, that will probably creak when it's installed in any frame that can be adapted to accept it. It's enough to make any Retrogrouch need a Proofide inhaler.
Posted by Brooks at 10:49 AM