A young Belgian rider named Eddy Merckx rode his first Tour de France. Arriving at the prologue on June 28, 1969, his bike bore his own name emblazoned on the down tube and his own picture on the head tube -- something that probably seemed brash for a rider of only 24, but Merckx had already demonstrated that he had the legs and lungs to back it up. He had already won his first Milan-San Remo, the '67 World Championships, the '67 Giro d'Italia, and the '68 Paris-Roubaix. Though he was ready to race the '68 TdF, he was denied the chance by his Faema team because the tour that year was still using the "national team" format. 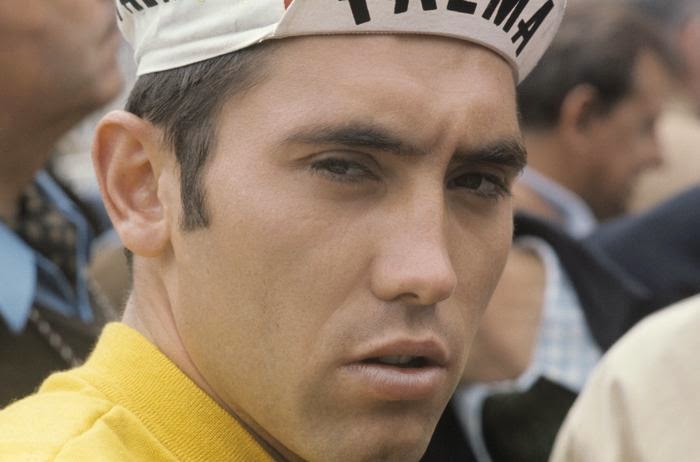 Merckx nearly missed the '69 TdF because of a positive doping test which ejected him from that year's Giro. Merckx denied the charges (and still does) and filed appeals. With the finding that there was significant evidence of irregularities in the testing, if not outright conspiracy against Merckx, the suspension was overturned in time for the Tour.

As the '69 Tour began in Roubaix, Merckx finished a strong 2nd in the opening prologue time trial, 7 seconds down from winner Rudi Altig. The next day, the tour's first stage was held in two parts -- the second part being a team time trial -- and it was there that Merckx led his Faema squad to victory as he put on his first race leader's Yellow Jersey.

Eddy briefly relinquished the Yellow in the 3rd stage, when a break got away and he chose not to chase it. His Faema teammate, Julien Stevens, was in that breakaway group and assumed the race-leader's jersey. Only one other rider in the '69 Tour, Désiré Letort, would wear yellow that year, briefly, after stage 5. 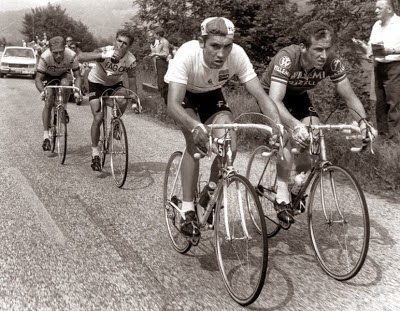 Stage 6 was the first real mountain stage, from Mulhouse to Ballon d'Alsace. Merckx won convincingly, 55 seconds ahead of the next finisher. It was his first Tour de France stage victory, and with it he recaptured the Yellow Jersey, and gained two to four minutes on his main general classification rivals, like Roger Pingeon, Raymond Poulidor, and Felice Gimondi. That would not be enough for the man who would assume the famous nickname "the Cannibal" during his stellar '69 Tour performance.

In stage 8, another individual time trial, Merckx would win again, adding a few seconds to his lead. Rudi Altig, just 2 seconds off Merckx's pace in the time trial, was still in contention overall, but it wouldn't last.

The 9th stage, in the Alps, Roger Pingeon attacked on the Col de la Forclaz and managed to ride away from everyone except Merckx. Though Pingeon took the stage win that day, he took no time back from Merckx. Altig faltered in the climbs that day and fell out of contention for the GC, while Pingeon climbed to 2nd place overall, though still more than 5 minutes behind behind the leader. Merckx would add to his lead by winning stage 11, and staying with the lead groups through the remaining Alpine mountain stages.

With an 8 minute advantage going into the Pyrenees, one would think that the leader of the Tour would be content to ride conservatively for the remainder of the race. That would not suit Eddy Merckx. In stage 17, one of the most difficult stages in the Pyrennees, Merckx and his Faema teammates controlled the pace over the first climbs of the day, the Col du Peyresourde, and the Col d'Aspin. On the Col du Tourmalet, the peloton disintegrated to only a handful of riders. After powering over the top of the Tourmalet, Merckx, thinking he was leading a small breakaway group, looked around to find himself alone. Rather than slow down, he continued to push his attack. He increased his lead on the road to the Col d'Aubisque. As he pushed himself over the top of the Aubisque, he had built more than a 7 minute lead over the next riders on the road. Even that was not enough. Exhausted, but driven, Merckx continued to push the pace over the last kilometers into Mourenx, by which time he had ridden solo for nearly 140 kilometers, and finished almost 8 minutes ahead of anyone else. His command of the Tour for the remaining stages was unassailable.

On July 20th, the final stage was another individual time trial, which Merckx handily won, and with it, his first Tour de France. Roger Pingeon, in second place, was just shy of 18 minutes behind. Poulidor, more than 22. Merckx had won the Yellow Jersey, the Green Jersey for Points Leader, the Mountains Classification (which would eventually become the Polka Dot Jersey, but that didn't exist yet), and the White Jersey which in those days represented the "Combined Classification," not the "Best Young Rider" category as it does today. Had "Best Young Rider" existed in 1969, he'd have won that, too. In addition, he was also given the Combativity Award, and his Faema team won the Teams Classification. Never before, and never since, has anyone so clearly dominated every aspect of the Tour de France.