The Running Bike - Joke or Scam?

Bike-related Kickstarter projects can be such a joke. For every worthwhile startup seeking crowdfunding, there are probably a dozen more that deserve nothing more than outright ridicule. Every tech geek and tinkerer out there thinks they can improve the bicycle, and Kickstarter is addled with worthless gizmos and rehashed versions of old ideas, put forth as something "new and innovative" by people with no knowledge of history. 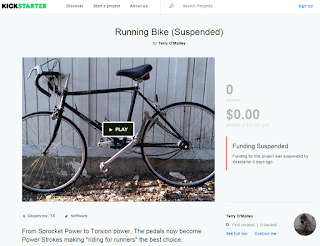 Here is one Kickstarter project that mercifully got shot in the back of the head before anybody could waste their money on it. The Running Bike was suspended by Kickstarter after about a week. Billed as something all-new -- a bike that simulates the motion of running -- the Running Bike is far worse than a basic rehash of an old idea. The bike pictured is LITERALLY an old Alenax from the 1980s -- a bike that was supposed to be revolutionary, and the company went to bike shows for years to build a market for the thing, but the company eventually folded in the early '90s. The bikes were available for several years at least, in both road and MTB versions, and some are still out there -- to be found at garage sales, on eBay, or Craigslist.

About the Alenax, here's what Jobst Brandt had to say about it: "The Alenax is a great example of an outsider inventing a solution to a perceived problem, creating something that is useless for the intended user. Much money was thrown into the design and manufacture of the Alenax." Brandt then goes on to outline all the problems with the design, and deflating all the company's claims, before concluding, "Summing it up, I think the inventor (and investors) did not realize that converting reciprocating motion into circular motion is best done by a rotary crank rather than a reciprocating lever, and above all, they weren't bicyclists."

So some guy goes on Kickstarter with pictures and a video of an old Alenax, trying to sell it as the "Runners Bike," and hawking its unique features with the goal to raise about $45,000 so he can "bring the Runners Bike to market so that everyone who wants to can enjoy the ride."

"Except for the a 'Tread Mill' there is no mechanical device that can utilized the same set of muscles action, for people who use running in their sport of choice, except for now. The torsion powered 'Running Bike', whether static (not mobile) or mobile is the only natural expressed excise training / activity tool besides the tread mill and of course actually running or walking that strengthens and activates both the skeletal and muscle structures. Whether your a professional athlete, have a strong exercise discipline or simply want to stay in shape, the Running Bike replicates running's specific action."

The tenuous grasp of English language conventions sends up all kinds of red flags for me. About the only thing missing is a desperate emotional plea from some deposed Nigerian prince.

Here's something that really got me scratching my head: 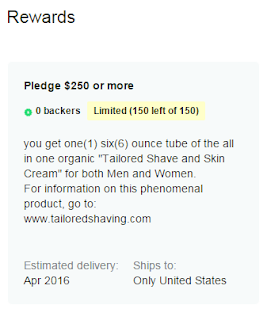 Yep - as a reward to backers who pledge $250 or more (for a bike you can buy on eBay for $240), they were willing to give out tubes of "Tailored Shave and Skin Cream." Incidentally, I looked up Tailored Shaving, and even though they do have a website and a Twitter account, I was not convinced that it is an actual company. There was a means to contact the company for information, but no apparent way to buy the product, or even information on where one could find it.

So ultimately, was The Running Bike a joke? After watching the video, which makes some fairly vague claims about the bike's benefits for runners, and mentions future plans to integrate more digital performance tracking for the product, I didn't get the impression that the fundraising effort was anything other than earnest. If it was meant as a joke, it didn't seem particularly funny. The shaving cream "reward" was about the only thing that hinted at "joke" to me.

And if if wasn't meant as a joke, was it some kind of pale attempt to scam people? Or was somebody actually thinking they could just put any old crap up on Kickstarter and get money for it?

Since it was suspended last week, I guess we'll never know.
Posted by Brooks at 12:21 PM