In case anyone had any doubts, electronic shifting is here to stay, if the latest Taipei Cycle Show is any indication. Shimano, Campagnolo, and SRAM all have their own electronic shifting systems -- all of them costing thousands of dollars. And now a low-cost version from Microshift is clearly in the works, with a functioning prototype system on display at the industry show in Taiwan. 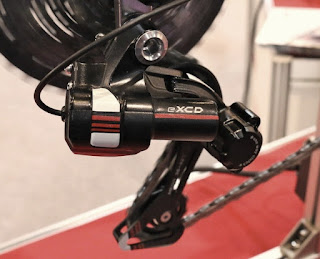 Reports are that the system would cost about $600 or less, making it cost-competitive with a lot of "normal" cable-operated shifting systems.

Apparently, one of the challenges with producing another entry to the electronic shifting world is getting around the patents of the leaders -- as virtually every element of the current systems on the market, right down to the wiring, is protected from infringement. The way I understand it, that was one of the reasons that ROTOR components decided to create their hydraulic shifting system, which is just about to launch later this spring.


Microshift, a Taiwanese company, has been making a name for itself with their good-quality-low-price components. In my experience, their current derailleurs function as well as anything from Shimano, and some even have nice buffed or polished silver finishes that look good on older bikes as well as new. I guess it was only a matter of time before they tried to break into the electronic shifting market. 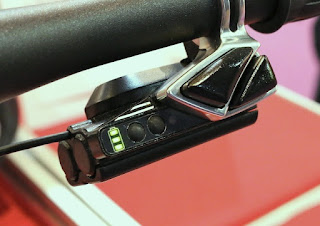 The way I understand it, the Microshift system, called eXCD, uses "standard" batteries -- in this case rechargeable AAs -- and keeps them in the bar-mounted shifter unit. According to visitors to the Microshift booth in Taipei, there are no other battery packs to mount onto the bike. The company says that a charge should be good for about 1000 km, or 6000 shifts.

I don't know if that's good or bad, but I do know that my old cable-operated shifters have virtually no limit of miles or shifts.

The rear derailleur doesn't look any better or worse than other electronic derailleurs I've seen so far, which is another way of saying that it's just as ugly as the rest. The shifter unit, which houses the batteries, brains, and buttons, is a clunky-looking thing, and doesn't look like it would "integrate" with a bike's brake levers the way some other electronic shifting systems do. Then again, it is intended for mountain bikes - not road - and it's still in the prototype stage, so the design could change. Doesn't matter to me, though.

Once the eXCD system hits the market, in another year or so, I suppose that it will only be a matter of time before we'll be seeing more and more e-shift systems at lower and lower prices, and eventually it could be hard to find a bike -- even at the entry-level -- that doesn't have to be plugged in or charged up before riding.

And won't that be something to celebrate?
Posted by Brooks at 12:39 PM