Cables are too simple for some people. Light. Simple. Easy to understand. Easy to fix. Replacing a damaged cable, whether for brakes or shifters, is an easy job even for an inexperienced home mechanic.

Can't have that, can we?

Even now, as hypesters are trying to convince us all that the future is electronic shifting (and that future is NOW!), oval chainring maker ROTOR Bike Components is releasing a new different technology -- hydraulic action shifting, to complement hydraulic brakes.

"Hydraulic systems are already something we use everyday without thinking twice," said Carlos Cartón, the lead engineer, "in car brakes, construction equipment, and airplanes. So it made sense to apply this proven technology to bicycle transmission, where the advantages are really clear."

Well - yeah. Hydraulic systems on cars and airplanes -- given their size, complexity, power, etc. -- are clearly superior to cable-actuated systems. But bikes aren't cars, or airplanes. Bikes are small, light, and simple. Cables work fine, and I fail to see how the "advantages are clear." 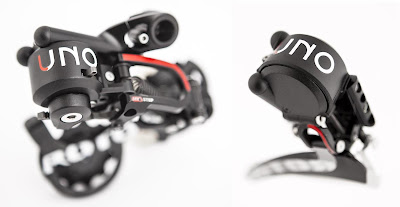 Dubbed "Uno," the system uses hydraulics to work both of the derailleurs as well as the brakes. Their brake technology was developed with help from Magura, but the derailleurs are unique tech. The company claims that hydraulic actuation will bring "increased precision" over cable-actuated systems, without the "disadvantages . . . like friction, devolving inconsistent force over time, and other inconveniences."

I don't know -- the "disadvantages" of a cable system, to my mind, are well offset by the simplicity. And cables themselves have actually improved to the point that the old notion of cable stretch is practically a non-issue. In fact, it was never considered a problem until the advent of indexed shifting -- in the days of friction-only shifting, who even noticed that the cables stretched over time?

But the folks at Bicycling tout the system's possible benefits: "less maintenance and better precision - at a lighter weight and with less complexity."

Lighter weight? Lighter than an electronic system with its batteries, etc., but I have a hard time believing that it saves any weight over a traditional cable system.

Less maintenance? Maybe so. But then again, have you ever bled a hydraulic system? I've done it on both cars and motorcycles, and it's a P-I-T-A. Messy. Finicky. And I admit that I don't know for sure what kind of hydraulic fluid they'd be using, but most types of hydraulic brake fluids have a limited shelf life once they've been opened. And for home mechanics who would only be doing such work occasionally, that means waste. Not to mention that old brake fluid is a contaminant that really shouldn't be disposed of by pouring it down the drain -- it needs to be recycled properly.

A unique aspect to the Uno derailleurs is that, unlike indexing systems from Shimano, Campagnolo, and SRAM, the indexing mechanism is built into the derailleur instead of the lever. That kind of reminds me of the old Shimano Positron system, or even Huret Commander -- both of which had the indexing in the derailleur. Neither was very successful. It's possible that having such a system actuated by hydraulics instead of cables would work better than on those early indexing shifters, but I'm not going to be putting that to the test.

More info will come about the Uno hydraulic shifting system soon, since Eurobike is currently underway.
Posted by Brooks at 12:10 PM