Disc brakes are here! The trial-period for using disc brakes on professional race bikes has finally arrived! And the response among the teams so far has been . . . underwhelming. Pro racers say "Wha'?"

The bike industry has been pushing disc brakes for road bikes for some time now - lobbying the UCI to allow them on professional race bikes, and doing everything they can to convince the rest of us of their unparalleled greatness. Seriously - the hypesters would have you believe that if you aren't buying a new bike with disc brakes, you're a danger to yourself and others.

Back in April, the UCI finally set up a timetable for approving disc brakes in the pro ranks - starting with the current "trial period" to run through August and September of this year, with another trial period in the 2016 season, then a planned full adoption in 2017. 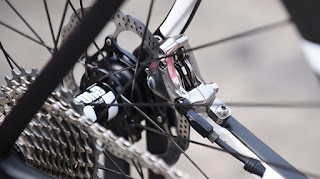 Apparently, only a handful of teams have embraced the trial, and even in those cases, the trials are very limited. According to Bike Radar, BMC, Orica-GreenEdge, and Giant-Alpecin have no plans on testing the disc brakes at this time, despite being sponsored by Shimano, which does make racing disc brakes systems. Teams that are sponsored by Campagnolo will not be testing disc brakes, as Campagnolo currently has no disc brake system to offer. While it has been confirmed that Campy is working on a hydraulic disc brake system, it doesn't sound to me like they are fully convinced that a disc brake revolution is truly needed. But rest assured, they'll have them soon enough -- probably just in time for the full adoption in the pro ranks.

Trek Factory Racing will have a rider on Shimano disc brakes at the Vuelta a España. The team's press officer, Tim Vanderjeugd, has said, "The goal is to find out what disc brakes bring to racing. We don't know if disc brakes are really an advantage in a race situation. . . We'll cherry pick some stages and try to find answers."

Apparently, one of the difficulties in applying disc brakes to the pro peloton is getting the bikes ready for the discs. Most of the sponsoring bike manufacturers have disc-brake models in their lineups, but they often are "endurance bikes" that have different, less-aggressive geometry than the racing bikes that the riders typically use for competition (another example of the increasingly narrow-segmented niche marketing the industry has been moving into). The other issue is that some of the disc brake wheel systems use proprietary hub spacing -- some are as wide as 142 mm in back in order to accommodate 11 cogs and the brake disc. Then there is the whole quick-release vs. thru-axle question. And even with the thru-axles, there are questions about 12 mm axles vs. 15 mm axles. All of these various incompatibilities make the issue of neutral support wheels a real headache.

While the response to the current trial period seems tepid so far, I have no doubt that we'll see more of this nonsense next year. Will someone wake me up when it's over?
Posted by Brooks at 10:37 AM