Recon Jet Glasses - Who Needs Vision When You've Got Data?

Back in December I wrote about the Recon Jet "smart glasses" which were billed as a "wearable computer" -- not unlike the much-hyped and really-stupid Google Glasses, only for athletes. At the time, I suggested that they reminded me of Geordi La Forge from Star Trek Next Generation, and referred to them as a good case of unnecessary data overload. 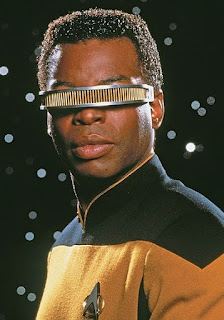 Since that time, the Recon company has been purchased by Intel, and the glasses are on the market, ready for purchase by performance addicts and tech geeks everywhere. I suppose the purchase by Intel means that if it's possible that there is actually a market for wearable computers, then the Recon Jets probably have as good a chance for survival as any. It's still a big "If," though.

A writer for CyclingTips managed to get a pair of Recon Jet glasses to test out. They didn't sound like anything I'd be willing to shell out $699 for. 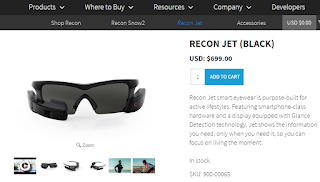 For one thing - and it's a "huge" thing - is that basically they are a pair of goggles that also incorporate a computer, a tiny projector, and a battery pack -- all perched delicately on one's nose. 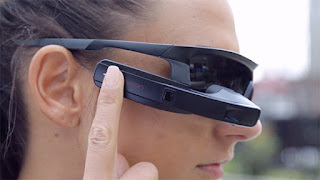 But who needs peripheral vision when they're riding a bike, right? We're talking about the future. PERIPHERAL VISION is for RETROGROUCHES!

Then again, how could anybody react to an SUV coming at them from their periphery when they're trying to decipher all this data being projected at them by the little projector that covers approximately 1/3 of the right-side lens? 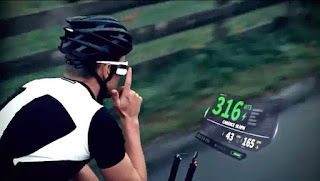 Okay - let's say I'm a tech geek and a performance addict who thinks peripheral vision is overrated and has no issue with carrying bulky objects on his face. I just have to have the Recon Jet glasses. Still a problem. Because I'm a far-sighted astigmatic who can't see a damn thing without bifocals. Sorry - no prescription users at this time. At some point, they're sure to create a prescription-ready insert (their website says "coming soon") which will most likely clip inside - behind the main wrap-around lens. So that's another thing to add some bulk and complexity (by the way, I've used those kinds of clip-in prescription inserts that come with one-piece goggle-type glasses -- sweat runs down in-between the inner and outer lenses, making a blurry mess of vision). 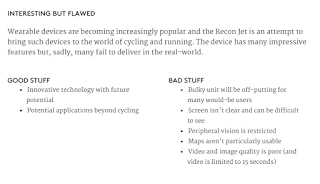 If you were hoping for an actual review of the Recon Jet glasses from someone who's actually tried them, you'll have to go with that review, or look elsewhere, as I won't be (and can't be) trying them out anytime soon.

Damn. I'll try to contain my disappointment.
Posted by Brooks at 12:38 PM