What Is The Masi Legacy?

Few bike names evoke more passion than Masi. The Italian master Faliero Masi was one of the preferred builders of many great racers, including Eddy Merckx, Fausto Coppi, and Jacques Anquetil (regardless of whose name appeared on the bicycles themselves), and the name is loaded with that "mystique" that makes bike fanatics drool like Pavlov's dogs.

Though Faliero's son Alberto continued to build excellent bikes in Italy, the U.S. rights to the Masi name were sold to American investors when a Masi factory was built in Southern California in the early '70s. That California factory fostered many great names in American framebuilding, as well, including Mario Confente, Brian Baylis, and others. Established builders like Albert Eisentraut and Dave Moulton also spent some time building at the California Masi factory.

The Masi name has been revived in recent years, but really has little, if anything, to do with the brand's storied past. According to Wikipedia, the brand is now owned by Haro Bikes, which is best known for BMX.

I just learned that Masi has a "Legacy Project." So, what exactly is the legacy of this current incarnation of Masi? Is it a legacy of bikes built by an Italian artisan under the famous Vigorelli velodrome? Or the legacy of the California factory turning out tidy American-built frames with an Italian accent through the '70s and '80s? Or is it the legacy that prevents Alberto Masi from selling bikes with his own name on them?

Looking at the company's current website, one can find lots of popped-out-of-a-mold-somewhere-in-Asia carbon fiber frames, and one "Speciale Series" lugged steel bike that is probably built in Taiwan, but looks decent from a classics-appreciating standpoint.

But what about that Legacy Project? Two limited-edition frames are being offered - in road and cyclocross versions -- dubbed the USA Gran Criterium and the Cross Campaigner respectively. Being built in the U.S. might mean that the legacy they are trying to invoke is that of the California factory. The fact that they are being painted by Jim Allen, who got his start at the California Masi factory, would seem to bear that out. Or maybe it has something to do with the fact that the bikes are built from steel? 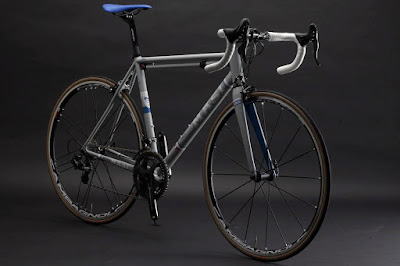 Then again, steel or not, looking at the bikes, I don't see anything that says "Legacy."

Comically oversized tubing, with a MASSIVE head tube. Welded construction. Bloated carbon fiber fork. And the cyclocross version has thru-axles and disc brakes. Who are they trying to appeal to? Is it the racers and racer wannabes? The original Gran Criterium was about as good as top-level race bikes got in their era. But riders looking for a narrowly focused, top-level race bike today aren't likely to be buying steel. And riders after that Masi "legacy" may not appreciate those design and build details that make the bike look like a ferrous version of a carbon-fiber bike.

I've got no problem with made-in-America steel bikes for the go-fast crowd -- but calling it a "Legacy" just leaves me with lots of questions.
Posted by Brooks at 11:04 AM