Recommended Viewing: The Legs of Amsterdam

"Without a bike, you're nowhere in Amsterdam. Bicycles are like the legs of Amsterdammers."

That's a notion you'll hear phrased several times in the short documentary De Benen van Amsterdam, or in English, The Legs of Amsterdam, directed by Wytse Koetse. The film follows a day in the life of a little bicycle repair shop in the Jordaan district of Amsterdam. The dingy little shop, located on a narrow alley, has been part of the neighborhood for 90 years, and its owner, Frans van der Meer, has been part of its history for the past 22 years.

Frans's shop is vastly different from the bike shops we've come to know here in the U.S. There are no wide, gleaming rows of sparkling new carbon fiber bikes, and racks of garish lycra clothing and new helmets. In fact, other than some new chains and inner tubes, there probably isn't anything in the shop that isn't recycled and reused. There are a few bikes along the walls (to be tripped over) -- but it isn't clear if they are used bikes for sale, or just repair jobs waiting to be picked up. The little shop, with virtually no windows, is lit by nothing more than a few old fluorescent tube fixtures that flicker and barely work at all. Stacks of wheels, bins full of nuts, bolts, and axles, and boxes of old hubs and sprockets clutter every nook and cranny in the shop. No, Frans's shop appears to be the place where people who rely on their workhorse bikes day in and day out come to get honest repairs to get them back on the road. Nothing fancy - just get it done right.

I couldn't help but notice that even Frans's work stand is just something whipped together from recycled parts - a couple big hooks suspended from a few old inner tubes.

One of the great things about the film is that it is not only a portrait of the little shop and its owner - but it also portrays a busy little working class neighborhood and its people. Throughout the film, a number of customers come in for repairs, but it also seems that some are there as much to visit an old friend as they are there to get their bikes fixed.

"It's always a lively bunch here," says one regular visitor. "Neighbors come to have coffee and catch up." He then goes on to describe how Frans will help a guy out by repairing his bike even if the guy is a little short on cash.

In one scene, a little old woman comes in for repairs, another regular customer . . . 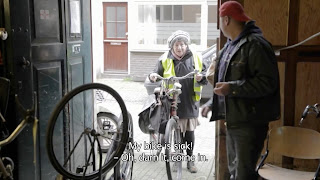 . . . and makes some sandwiches for Frans and his assistant while they fix her bike. 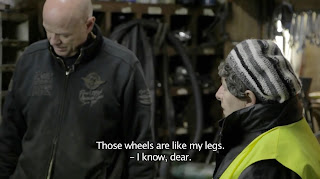 There are some funny moments in the film, such as this one from the beginning:


And it should be noted that, however good of a mechanic Frans may be at keeping these old workhorses going, the film probably shouldn't be taken as any kind of instructional film, or an example of good and safe shop practices. There are lots of shots like these ones:

and nary a bit of eye protection to be found. Frans looks away (so he can't actually see what he's doing) so as to avoid the sparks. Awesome!

I really enjoyed getting this look at the humble little bike shop in Amsterdam's Jordaan district. And humble really describes it - the shop - the owner - the people. At the end of the film, as Frans sweeps up and turns out the lights, he says, "This shop is my freedom. It's my work and I feel at home here. I'll never be a millionaire or anything like that. But I enjoy what I do. I enjoy my work. I enjoy my life. I'm happy and satisfied. Happy to be a bicycle repairman."

You can check out De Benen van Amsterdam on Vimeo, or watch the embedded version from YouTube right here: