The "Answer" to Drunk Cycling

Equality is a funny thing, isn't it? For example, in the eyes of the law, a bicyclist and the driver of a car have the same right to the road, and have the same responsibilities. They are supposed to be equal. Yet in terms of protection, as in an accident for instance, we cyclists have a distinct disadvantage to cars with their thousands of pounds of sheetmetal and airbags, etc. On the other hand, when it comes to their ability to inflict damage on other people and property, obviously a car is capable of much more carnage. To many non-cyclists the answer to that little de-facto inequality is simple - make all cyclists wear a 6-oz. foam hat, and then they don't have to do anything to curtail the rights of drivers to text and watch YouTube videos while driving, or even expect them to pay attention while operating a 2-ton weapon of mass destruction. And then there is the overwhelming attitude of many drivers that bicyclists are 2nd class road users who don't really have the right to be on the road at all, despite what the law may say. So in many ways, we're all equal, except when we're not.

People who don't ride get some stupid notions about cycling and cyclists. And then they come up with stupid products to try to capitalize on that stupidity. And then stupid reviewers try to convince us of their merits.

Take the Alcoho-Lock, for example -- it is a lock that includes a breathalyzer to keep drunk cyclists off the road. That's right. You lock up your bike with the Alcoho-Lock, and then if you've been drinking, you have to get on your knees, put your mouth up to the lock, and blow. If it detects too much alcohol, the lock refuses to open. Not only that, but it sends a message via the user's smartphone to a family member so that they can either come pick the person up, or chastise them (I'm not sure which). 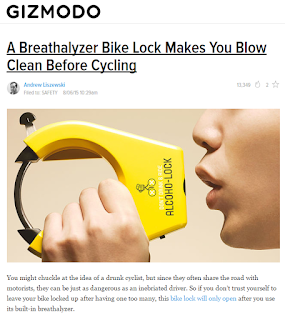 Of course, the non-cycling reviewers at Gizmodo think it's swell.

"You might chuckle at the idea of a drunk cyclist, but since they often share the road with motorists, they can be just as dangerous as an inebriated driver," their reviewer writes.

Mind you, I'm not suggesting anybody should drink and ride any more than they should drink and drive. But just as dangerous as an inebriated driver? Yeah - that's why we see headlines like this all the time: "Drunk Cyclist Leaves Dozens Dead." Also remember that, while it's certainly possible to ride a bike when drunk, basic balance issues probably make it physically harder to do. It's much easier to get behind the wheel of a car under the circumstances.

And you know how you should never read the comments section after an article involving bicycles? Yeah - I made that mistake again: 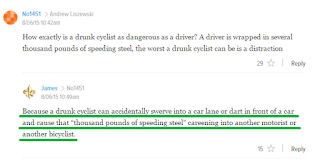 The makers of Alcoho-Lock have a website with a helpful graphic that shows how to end the plague of drunk riding:

And a video to show the merits of the product. It opens with shots of a bunch of hip-looking urban riders in Japan, all out riding at night (all on their way to get rip-roaring drunk, apparently):


I just hope that legislators here in the U.S. don't hear about the Alcohol-Lock. They'll be sure to add it to their mandatory helmet laws.
Posted by Brooks at 12:58 PM