Brooks Saddles has been in business for 150 years - essentially going back to the beginning of bicycles as we know them. To celebrate that history, the iconic company has released a book, The Brooks Compendium of Cycling Culture (Thames & Hudson, $32.75), which they describe as "A celebration of the bicycle and its wide-ranging cultural impact worldwide -- an insider view into the world of cycling bound to inspire the imagination of professional and amateur cyclists alike."

The Compendium is an eclectic (and perhaps eccentric) collection of stories, essays, photos, drawings, profiles, and more - compiled from a range of writers, artists, designers, and athletes, and edited by Rouleur magazine's Guy Andrews.

For the most part, the book is NOT about Brooks Saddles, the company or its products. In fact, some chapters are only tangentially related to bicycles at all. Instead, the book captures a wide range of "areas of interest" in the wider world that might appeal to cyclists, or to like-minded folks who appreciate tradition, craftsmanship, creativity, or perhaps even a certain distinctive "Britishness." There are chapters on British innovations (among which, the leather saddle and the pneumatic tire are listed alongside electric teakettles and hypodermic syringes); the simple joys of cycling, whether for adventure or simple transportation; the sometimes hostile relationship between London's cyclists and taxi drivers; British vs. Continental bicycle racing; naked bike rides; and an explanation of words and phrases from bicycle racing, including of course the expression "on the rivet."

The only chapters that really seem to be centered on Brooks include the story of the company's early beginnings, and a photo essay depicting the inner workings of the Brooks factory. 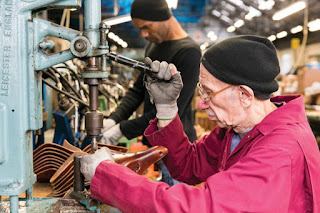 Perhaps because of its eclectic nature, the Brooks Compendium is not quite the book I expected it to be, and is not like most other cycling books in my collection - but it is an engaging book to read and peruse. If I had to compare it to anything that Retrogrouch readers might relate to, I'd say it reminds me a little of an expanded Rivendell Reader in book form. Like the Brooks Compendium, that periodical would frequently feature articles that had little to do with Rivendell bicycles specifically, or sometimes not even bicycles in general, but somehow would capture the interest of anyone who would be drawn to that company's distinctive (idiosyncratic? contrarian?) philosophy. It was always an enjoyable read, and so is the Compendium.

The Brooks Compendium is a large format, beautifully bound book, and over 190 pages of stories and pictures that any true bicycle devotee would be sure to enjoy.
Posted by Brooks at 11:33 AM