Right after I posted about the amazing 2-Spoke wheels (that supposedly generate speed in crosswinds) I caught "wind" of this other high-tech wheel-related story - about Shimano 3-spoke aero wheels shattering under a Team Sky rider in the team time trial at this year's Tirreno-Adriatico race.

The wheels are Shimano PRO Textreme carbon fiber wheels that were also being used by the BMC, Orica-Scott, FDJ, Sunweb, and LottoNL teams in addition to Team Sky. Shimano claims that the wheels passed "rigorous testing" and have a "flawless record."

When the front wheel of Gianni Moscon begins to shatter, he appears to be on perfectly smooth pavement, just riding along (at nearly 40 mph). Although Moscon's wheel is the one that was utterly destroyed and caught on camera, teammate Geraint Thomas said that two other wheels used by the team were also badly damaged in the stage. So much for the "flawless record."

So, what happened? The failures are being blamed on three of the riders hitting potholes in the road (how big these holes were isn't mentioned) but what's interesting is that the wheels didn't break right away. According to the interview with Thomas, Moscon's wheel was the first to break up, but others broke further down the road, whereas the rest of the team had to wait for the others to catch up so they could finish the stage with at least five riders. 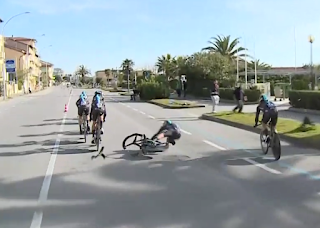 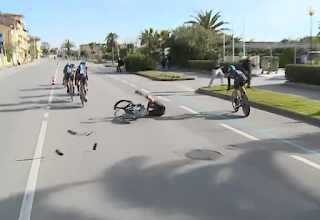 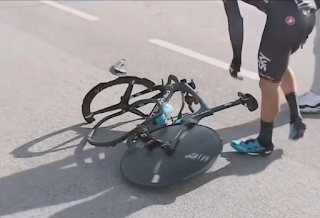 By the way, the same wheels have been available to the public for a couple of years now and sell for about $2500 (yes - that's for just the front wheel). I can't imagine paying that much for any wheel -- not even one that doesn't shatter spectacularly. 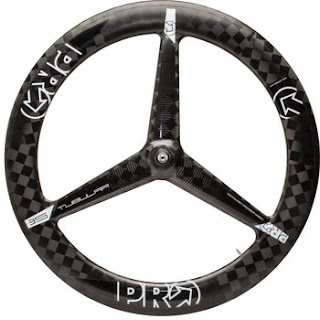 Shimano is reportedly investigating the incident. In their statement they said, "We are continuing to look closely into all factors that could cause the incident. During production the three-spoke wheel passed PRO's extremely high internal quality control and ISO/UCI standards. PRO's three spoke wheel was introduced in 2014 and has a flawless record, achieving countless time trial victories since, including BMC's team time trial win in the same stage."

In other words, "isolated incident" and possibly, "rider error." Something tells me that their investigation is going to conclude that the riders should have known better than to hit potholes in the road. Good advice for any fool with more money than sense who shelled out $2500 for a single wheel. 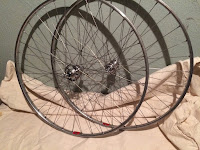 Just to put this all into some Retrogrouchy perspective, I recently built what I consider to be a pretty killer set of wheels with NOS vintage Campagnolo Record hubs and Mavic Monthlery Legere rims, and butted stainless steel spokes (36 rear, 32 front). The components were about the best one could get in the late '70s and early '80s -- professional quality all the way -- and in my view, just as good today as they were back then, regardless of the current era's carbon fetish. Their weight rivals a lot of today's carbon fiber wünderwheels, and I expect that they'll probably last the rest of my life. I think the total cost was about $350. Hmmmm . . . which would YOU choose?
Posted by Brooks at 5:05 PM