If Spiderman Had a Bicycle . . . The Razik Vortex

I think Spiderman is designing bicycles now, but he should probably stick to fighting crime. What else can one think when seeing something like the Razik Vortex? Weird. 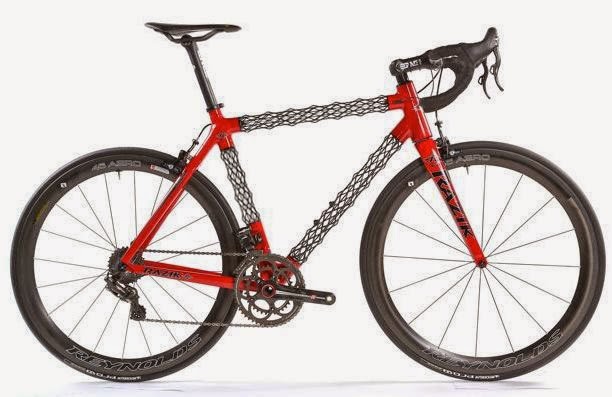 I suppose there are a lot of people out there who would think a bike like the Razik is pretty cool. It's unique, I'll give them that, but it kind of makes me shudder. For sure, nobody will ever mistake it for any other bike on the road, and it doesn't even need its name brandished in billboard-sized letters on the downtube -- not that you can put a name on the downtube. They do have the name splashed pretty boldly on the fork, however.

The tubing design is actually not unique to Razik, but is something known as IsoTruss and was originally developed for NASA. The design of the tubing, which is constructed of carbon fiber and kevlar, forms a latticework of little triangles and pyramid-like shapes, which are supposed to make an incredibly light-but-strong truss structure. I've read that the carbon "lugs" that form the head tube, bottom bracket, and seatstay/seatpost junctions are capped inside to keep water from getting inside (but there may be some strong reasons against taking this out in the rain -- read on.)

Is it light? Sure, but apparently not any lighter than some other high-end carbon fiber frames. That seems odd, but what do I care about weight, really? My lightest bike probably weighs in the neighborhood of 20 pounds! The other claims are of tremendous stiffness and improved vibration damping. I can't speak to the validity of vibration damping, though it's something carbon fans like to talk about. On the other hand, stiffness is like some kind of holy grail that bike designers and manufacturers have been chasing for years now. Though it seems to fit a certain sense of intuition that a stiffer frame is "faster" or more efficient, oddly enough there is no actual proof that a stiffer frame has any measurable benefit. As for "faster," that actually defies physics -- a bike is a stationary object until a rider makes it go, and it's only as fast as the rider. More efficient? It's pretty debatable, and I've seen lots of evidence to the contrary. Just read this article from Jan Heine at Compass Bicycles.

Reviewers of the Razik are giving it some mixed reviews, though my favorite was from Fat Cyclist, where he points out that the unusual tubing can actually be used to grate cheese. Handy!

Several testers have noted that the weird texture and shape of the tubes can be pretty painful if one should catch their knees or thighs on it through the pedal stroke, particularly if one rides with a tight, knees-in position. BikeRadar also pointed out that when riding in wet conditions, water and muck coming off the front tire flings up right through the open tubes and into the rider's face and neck. Got it -- this is a dry-weather-only bike.

The Razik Vortex is made in Utah (the IsoTruss structure was originally developed at Brigham Young University) and costs about $3999 for the frame. Expect an Ultegra-equipped bike to cost close to $6000, and somewhere near to $15 grand for Dura Ace with Di2, or Campy Super Record EPS. NASA technology doesn't come cheap. But if someone is obsessed with Spiderman, the Razik Vortex just might be a must-have item.
Posted by Brooks at 11:26 AM