How did I miss the biggest breakthrough in preventing bicycle theft to come along since some Victorian-era miscreant first stole a Penny Farthing in the 1870s? Thanks to the blog Midlife Cycling for calling this one to my attention. Yerka is being billed as the first "unstealable bike." My only question is who'd want to steal it? It looks to me like yet another bike from the crappy "urban fixie" school of design. 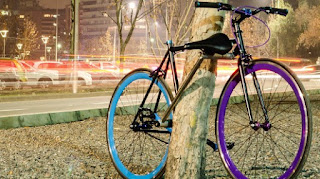 Ok, so, what exactly is it that makes the Yerka so hard to steal? Instead of using a lock to secure the bike to an immovable object, the bike itself IS the lock. The folks at Gizmag, always eager to embrace anything new (no matter how goofy and/or pointless), say that designing a bike to act as its own lock is "the best answer of all." Umm. . . maybe if you're more interested in riding a lock with wheels than an actual bicycle. And how hard is it just to carry a good U-lock?

Designed by three engineering students from Chile, the idea is simply that breaking the lock would destroy the bike, "which even the most feeble-minded petty criminal should realize is an utterly pointless exercise." Then again, one should never underestimate the stupidity of some criminals, especially petty bike thieves -- like the ones that will steal a $3000 bike and sell it on the street for $25 to buy a rock of meth. I can imagine some bike-thieving junkie succeeding in breaking the Yerka, only to figure out its dark secret after the fact. Then the owner might discover his bicycle is still where he left it, though reduced to a completely unrideable set of tubes, and perhaps stripped of whatever parts might still be useable.


Anyhow, the way it works is that the down-tube on the frame is multi-jointed (always a good sign when one is after structural integrity) and separable. Then an extra-long (extra-extra long) seat post is inserted through the jointed down-tube sections. Of course, in a high-crime area, one still needs to worry about stolen wheels and/or other components. The company recommends using locking bolts on the wheels, though I suppose if one is serious about keeping it all intact, one still might consider carrying some kind of extra cable lock. Oh well.
Posted by Brooks at 7:04 PM