"The man is more important than the machine." That is the message young readers and future retrogrouches should take from Frank Dickens's classic children's story The Great Boffo, which has just been re-released by the Pursuit imprint of Snowbooks. 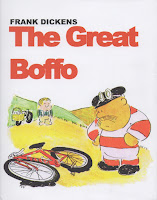 First published in 1973, The Great Boffo draws its inspiration from the golden era of bicycle racing, when road-hardened, mustachioed men wore goggles and raced over dusty unpaved roads. The author, Frank Dickens, was well known in the U.K. for his long-running comic strip Bristow, which ran for a record-setting 41 years. Dickens was an avid bicyclist, and in the 1940s had moved to Paris to pursue his dream of becoming a professional bicycle racer. When he found he could not make a living as a racer, he began selling cartoons to French magazines and newspapers, including the sports daily L'Équipe with its historic link to the Tour de France.

It seems fitting that The Great Boffo, written by an avid cyclist and racer, was revived by another fanatical bicyclist, James Spackman, who has fond memories of the book from his own childhood. "My dad used to read it to me as a kid, and certain phrases from it (such as "the man is more important than the machine") are often quoted in my family." Spackman accepted it as a privilege to bring back one of his childhood favorites and to introduce his old hero to a new generation of children.

The book is about a little boy who works in a wine shop and idolizes the champion bicycle racer, the Great Boffo. The boy dreams of seeing his hero when the big race comes through his town, but unfortunately he has to work, making deliveries for the shop's owner, Mr. Oscar, who has no time for enjoying bicycle races.

While the boy is out on his "heavy and awkward" delivery bicycle, carrying bottles of lemonade to a customer across town, he happens upon the feeding station for the race -- but the station is empty and the racers are approaching. Thinking fast, the boy gives them the drinks from his basket. But when one of the bottles shatters on the ground and his hero, the Great Boffo, suffers a double puncture, the boy finds he has another way to save the day, as Boffo borrows his delivery bike to get back into the race.

The Great Boffo is a thoroughly enjoyable book for kids and adults alike, and the overall message is one that I think any retrogrouch can get behind. Whether you buy it to share with a child or to enjoy it yourself, the book can be purchased HERE through Amazon.
Posted by Brooks at 10:58 AM