Once again, another automotive designer is showing how clueless car-centric thinkers are when it comes to bicycles and the needs of bicyclists.

I saw an article on CyclingWeekly that the bike company B'Twin has teamed up with Volkswagen designer Xavier Lescourret to create a concept bike that is supposed to represent the ultimate commuting bike -- the commuting bike of the future. 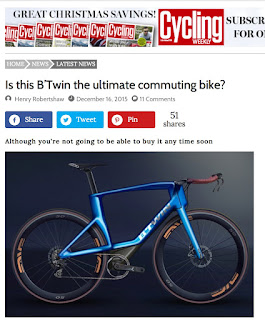 The claim is that this carbon-fiber wünderbike has all kinds of "clever" features to appeal to anyone who rides their bike to work.

Hmm . . . might these "clever" features include some means to keep rain from soaking the riders' backsides? Or some means to carry all their work essentials with them easily? Well . . . no. But it does have a weird split top tube that is designed to carry a MacBook laptop computer within the main triangle -- "getting rid of the need to carry it on your back" says the article. Ohh -- like a rack and some panniers? Uhh . . . not exactly. In fact, affixing a rack and/or some panniers would be difficult and unlikely. This is apparently a bike for commuters who only carry a Macbook or similar-sized laptop -- and nothing more.

What about fenders? Nope. Nowhere to mount them. This is for commuters who only live in the most arid of climates.

Let's see. Something else I think of when I think about a good commuting bike is the problem of theft prevention. Well, the B'Twin "ultimate commuter of the future" does have an integrated locking cable that pulls out of the frame, serving as a built-in lock. It looks like the kind of cable that a person could cut through with a pair of wire cutters, never mind heavy bolt cutters. Given that everything about this bike practically screams "I'm EXPENSIVE," I imagine it would be quite a target for thieves. Maybe it's best if owners just carry it into the office with them, in which case folding might be considered a clever feature. No, it doesn't fold.

Some commuting cyclists might value comfort on their ride to work, choosing a more upright position for their work bike. Not the commuters of the future, though. The B'Twin concept features a low tucked time-trial position with its bullhorn handlebars. It's for short, fast commutes, and for young commuters with no neck or back issues.

Lighting can be an important feature of a good commuting bike - and that is one thing the bike does have. Built-in LED lights on the front and rear. I can only guess that they're of the type that help a person to be seen (which is OK) but not the kind that help the rider to see the road ahead. Serious commuters will likely still end up strapping a headlight with some serious lumens to that bullhorn handlebar.

I'm still trying to figure out what exactly makes the B'Twin/Volkswagen concept bike the "ultimate commuter of the future." Maybe if someone has money to burn, lives within a couple of miles of work, never rides when it's wet, has no worries about theft, and whose only "work essential" is a small laptop, -- then this might actually live up to the billing.

OOHH! I just figured it out. It's the ultimate commuter bike . . . for people who work at home.

Glad we got that sorted.
Posted by Brooks at 1:33 PM