You know what's wrong with bicycling? It isn't a full-body workout - and that just annoys the crap out of some inventors, which is why there are so many people out there trying to turn some variation of THIS:
Into something like THIS: 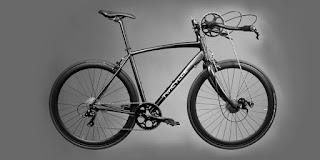 The TwiCycle is the latest iteration of something that the inventors seem to think has never been done before. From the TwiCycle website: "TwiCycle was invented out of desire to achieve full body workout while cycling outdoors and out of frustration that no such affordable product exist on the market today." The site continues: "TwiCycle incorporates several exercises into a single workout by utilizing different muscle groups simultaneously."

"TwiCycle is currently one of the very few sports which allow FULL body exercise. There is no muscle on your body that you can’t put to use."

Remember, the brain is not a muscle.

The makers claim "It went from an idea to proof of concept to a working prototype in a matter of a few months."

Whoa - just a few months? How long would it have taken to find out about these?

And there's the RowBike, which has its origins going back over a decade:

And that doesn't even touch on the numerous contraptions that never got beyond the prototype phase or out of the home-tinkerers' garages.

They would probably point out that all these other variations on the hand-drive concept only drive the rear wheel, whereas the TwiCycle is a 2-wheel drive concept.

Then again, so was THIS thing:
An extra couple of minutes of searching turned up another that looks like it's from the '50s:

And of course there are all manner of hand-cranked tricycles and wheelchairs out there, too.

Originality notwithstanding, let's get back to the TwiCycle: 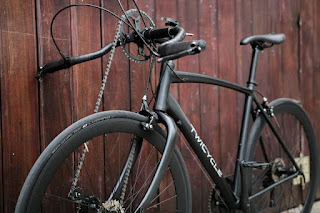 If you're looking at that big chainring perched right there by the stem and feeling a little intimidated, don't worry - the makers of TwiCycle have got you covered: 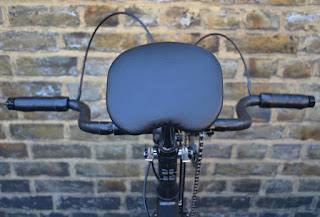 Yes, they offer a big chest pad that they assure potential buyers will keep them from tearing their faces off in a head-on collision. Well, that's a relief.

And in their FAQ page, they address lots of concerns about their hand-cranked, front-drive system. I'm not certain if the answers would make me feel better or not:

Question (not actually a question, by the way): "A chainring/sprocket right underneath your chin . . . that's asking for some serious injuries in an accident!"

Answer: "If you’re falling of the bike at speed, the chainring will be the least of your worries!"

"An optional standard chain guard can also be fitted (like on old school bikes), but this would be completely unnecessary as no part of the body can reach it due to the already installed pad." They go on to add "unless of course you’re actually a giraffe in which case you shouldn’t be cycling in the first place."

If you are a giraffe who enjoys cycling, don't let anyone tell you that you shouldn't. Nobody should tolerate that kind of discrimination.

Answer: "It’s not any more dangerous than normal handlebars with all the accessories…and it’s a bike chain, NOT a chain saw."


Question (Again, NOT actually a question): "Watch when that chain gets caught in the front wheel!"

Answer: "Watch when the back chain gets caught too!"

That seems a little defensive. They continue:

"The front wheel drive mechanism is no different to a normal rear wheel mechanism and this has been tried and tested for a 100 years. The risks are the same as for any other standard bicycle."

No difference? Actually, BIG difference. Chains can (and do) get caught or jammed into a wheel badly enough to stop the wheel from turning (it probably isn't all that frequent - but it does happen). When that happens on the back wheel, the bike will skid. If that were to happen on the front . . . well . . .

Understand that I'm not necessarily suggesting that these face-gouging/finger-severing/face-planting scenarios are particularly likely - but I wouldn't be too quick to completely dismiss them as possibilities, either.


Good idea or bad idea, either way, the TwiCycle inventors are probably feeling pretty good about their new full-body-workout-bike. The website includes an "About the Team" page, with a brief profile of each member.

Goran Rista - Marketing and media for TwiCycle, professional musician, music and video producer, audio engineer and entrepreneur who enjoys anything that involves creativity.

Snezana Rista - Web and print media design for TwiCycle, the youngest of the Rista trio with the sharp eye for detail to turn anything into a beautiful peace of art. (Yes, that says "peace of art." No, I don't know if that was an example of artistic license)

Notice that none of their profiles mentions "cyclist."

Why is it that the people who are always re-inventing the bicycle are never actually bicyclists?
Posted by Brooks at 7:16 AM