The Case for the Battery-Free Bicycle

Batteries are all around us - and our reliance on them is constantly growing. Think of all the objects in our daily lives that now use them. Our computers, cell phones, and watches, of course. Some of our small appliances in the kitchen, and power tools for the home workshop or lawn and garden. The list goes on and on. In some cases, the batteries have allowed us to unplug from the wall, at least temporarily, giving us more mobility with our electronics. In other cases, we have battery power taking the place of some task that used to be performed manually (I think the silliest of these might be the so-called "cordless screwdriver" -- I mean, aren't all screwdrivers "cordless"?).

One of the biggest areas for growth in batteries is in the growing market for electric and hybrid vehicles. More and more there is a push for electric vehicles as the answer to both energy and environmental concerns - and the cost of the battery packs for these vehicles keeps decreasing, even as the power and range of those batteries improves.

The same trends of lower battery cost and greater efficiency mean that we're seeing increasing battery use now on the most-efficient of vehicles: our bicycles. Electric bikes are a rapidly growing market, but even on non-electric bikes (or should I just say "bikes") we're starting to see more reliance on batteries. It is now possible to buy a bike that is propelled (or at least assisted) with electric power, shifted electronically, with rechargeable battery lights, computer-controlled suspension settings, as well as built-in power meters, integrated computer readouts, GPS navigation, and full smart-phone integration. Some might even have such "necessities" as electronically operated "dropper" seat-posts, and might be locked up with electronic "smart" locks. I figure that electronically controlled brakes are likely just around the corner. That's a lot of batteries for something that has, for all intents and purposes, worked quite exceptionally for well over a century with no power source apart from the human pedalling it.

The arguments for electric cars (whether full-electric, or gas/electric hybrid) are at least valid, even if the support for those arguments is debateable. There's no question that fossil-fuel-powered cars are inefficient and a major source of greenhouse gasses, and our dependence on their fuel keeps us subject to the whims of foreign governments in parts of the world that may or may not be hostile towards us. Today's electric cars require little or no gasoline, and have minimal or even zero tailpipe emissions -- so they're a total win-win, right?

Not so fast. In a lot of ways, the change from gas to electric is not so much an improvement as it is just a shift from one kind of bad to a different kind of bad.

Most of us have probably heard the argument that, even though an electric car doesn't burn fuel itself, the electricity that recharges the batteries comes from a power plant somewhere -- a power plant that could very likely be burning coal. There are enough variables at play that it can be difficult to get an accurate figure on exactly how much carbon is used or saved between a gasoline-powered car vs. an electric car, and because the whole issue can be politically charged (there are lots of profits at stake on either side), the comparisons one does find are sometimes subject to biases. When it comes to the basic question of fueling/powering a vehicle, I think it's safe to say that the electric vehicle might have a slight environmental edge, but not as much as proponents might like to argue. Perhaps if we could generate more of our electricity with wind or solar power, that could improve.

But that's only a small part of the story. It's important to also look at the cost of producing the batteries that power these electric cars, as well as e-bikes, laptops, cell phones, and all the other electronics we're using today. From several perspectives, those costs can be equally as bad as the production and burning of fossil fuels. The currently favored batteries for electric vehicles and so many other electronics are Lithium Ion (Li-Ion) batteries, which are relatively light, powerful, and great for applications where frequent recharging is needed. But the lithium, cobalt, and other rare metals used in the batteries come with major health consequences, and have to be mined in operations that can have a huge environmental impact. Just like fracking for oil and gas, these metal mining operations essentially trade fresh water for energy. The mining process uses millions of gallons of fresh water, creating a highly-toxic slurry which goes through various processes to separate the desired metals, and putting them through various acid baths, with the end results then cooked in high-temperature kilns. Each step of the process requires huge amounts of energy and releases more carbon into the atmosphere -- easily rivaling anything in the fossil fuels industries. And the kicker is that the desired metals make up less than 1% of what is mined, so more than 99% of what is mined from the ground ends up as toxic waste.

Overwhelmingly, these mining operations are in faraway parts of the world, so they go unseen and undiscussed by the consumers using most of these new generation batteries. As far as environmental concerns go, there is still a ton of damage being done, but it's shifted from "here" to "way over there." But there could be geo-political issues, too. A lot of the major deposits for lithium are in places like China, Bolivia, Argentina, and even Afghanistan. As our dependence grows for better and cheaper batteries, we could simply see a shift of power from oil-producers to lithium-producers. I wouldn't get optimistic that the possible future political and/or military ramifications would be any better.

So am I saying I'm against electric cars? Or that I'm pro-petroleum, or some other nonsense? Of course not. When looking at all these downsides of battery production, energy consumption, and carbon emissions, it's important to consider the status quo - which is millions of gas-guzzling cars, trucks, and SUVs, most of which rarely carry more than one or two humans - spewing smog into the atmosphere. Compared to that, electric and hybrid cars represent an improvement, however small it might be - and further advances in the technology, along with recycling of the old batteries, could make things even better in the long run.

But that's all in comparison to cars. What about bicycles?

Obviously, the status quo on bicycles is that they are already zero-emissions and the most efficient vehicles available. Even the production of a bicycle, and any energy used in its production, is a fraction of that which goes into building a car. Adding electronic doo-dads, motors, and batteries is a big step backwards for a bicycle. All the environmental issues I've already mentioned about batteries -- from mining to production, to using them, recharging them, and eventually disposing of them, I believe, are compounded by the fact that they take something clean, green, and efficient - and reverse it, making bicycles more like . . . cars.

Electronic, battery-powered shifting, computing, power-metering, navigation, and the rest do little to improve a ride - nothing to improve a bicycle - and are demonstrably unnecessary. And I'd argue that the minor convenience that some of these things might possibly add is more than offset by the bigger picture of their impact - most of which is invisible to the consumer. 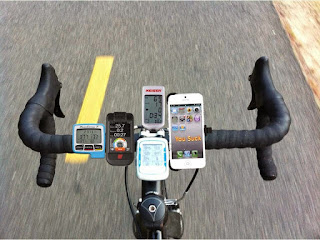 These are big-picture arguments. The smaller scale arguments are in things that I've mentioned numerous times in previous posts. The need to charge (or replace) batteries before riding a bicycle seems almost oxymoronic (spell-check is telling me that word doesn't exist, but it works so I'm sticking with it). The fact that a dead battery could potentially end a bike ride is likewise ludicrous. Power metering and similar performance data tracking might be acceptable for someone who is paid to race a bicycle - but those things really have nothing to do with bicycling. GPS and turn-by-turn navigation might be useful on a cross-country tour, though how many people actually do that? (and again, if the batteries die, you'll still need a good ol' fashioned map to find your way). When electronic shifting and other accessories work, they might seem like a great advancement to their fans - but when something goes wrong (and eventually, even the best of things break down) often the only solution is complete replacement. Finally, if the last few years have taught us anything about electronic goods, it is that even if they don't break down, they are often rendered obsolete within a few years. If those electronic goodies are fully integrated into a bicycle, as they increasingly are, then the lack of compatibility between old and new can render the whole bicycle itself just another disposable object.

Bicycles are at their best when they are simple, reliable, and beautiful. They aren't improved by batteries and electronics. They aren't cars. In fact, they're better.

Unplug. Ditch the batteries. Keep it simple. Enjoy the ride.
Posted by Brooks at 12:09 PM