Interesting Idea - But Should It Be Necessary?

I just saw another bike-related Kickstarter that looks like it's on the verge of going down as a failure: The iLumaware Shield radar-enhancing taillight. With only hours to go, it had only raised 24% of its fundraising goal. 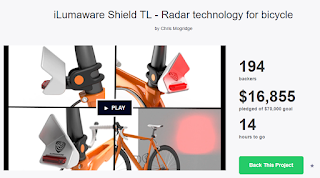 What is it? The iLumaware Shield is a taillight that also serves as an amplifier for the radar signals that are sent out from newer cars equipped with accident avoidance systems. The idea is that even if the driver isn't paying close attention, then at least the car itself will recognize the cyclist and take whatever precautions the accident avoidance system is supposed to take. As it is, a bicycle is practically invisible to accident avoidance radar, but the iLumaware page says that the device increases the signal bouncing back to the radar system, making the bicycle seem "larger" than it is, and increasing the likelihood that it will be detected. The taillight isn't overly large, or too terrifically cumbersome-looking - though it does suffer a bit from the "dork factor."

Is it a bad idea? I don't think so. As a routine bicycle commuter who spends many mornings riding in the dark before sunrise, I am very conscious of the need to be visible. And the problem of distracted driving keeps getting worse. When a cell phone addled driver is trying to read or send a text, all the reflective clothing and taillights in the world don't make a difference in a cyclist being seen, so one could argue that any device that counters the problem might be worth trying.

It does have certain flaws, however. First and foremost, it only helps amplify a cyclist's signal when being approached from behind. Certainly, being hit-from-behind is a major fear of many road-going cyclists, and while I can't definitively prove it, I believe that the threat of that type of collision is growing (again, I blame the spread of so-called smart phones in the hands of dumb humans). There are some statistics on the iLumaware Kickstarter ad that claim there were 35,000 collisions between cars and cyclists in the U.S. in 2015, and that the majority were hit from behind. I don't know where they got those figures, but they don't seem to be supported by the most recent study I've seen on the subject: the Every Bicyclists Counts study from 2014, by the League of American Bicyclists. Still - a legitimate concern, but not the only one. There are lot's of other types of car-bike collisions that are very common but would not be helped by the device - such as right-hooks, left-hooks, broadsides, and more. Also, it only works if a driver happens to be in a car that has the accident-avoidance radar system -- a growing number, perhaps, but still a fairly small percentage.

The part that really annoys me, though, is that products like this, or Volvo LifePaint, or this ridiculous Australian "smart helmet" (for "responsible cyclists" - that basically is like wearing a small car on your head) is that they all seem to push the notion that drivers bear no responsibility to look where they're going and exercise good judgement around other road users. It seems like there is a never-ending stream of people trying to find more and newer ways to enable lousy driving, like families and friends covering for an alcoholic uncle. Driver-centric politicians love such things too, because if they can shift all the responsibility and blame onto cyclists, then they don't believe they need to do anything to regulate driver behavior, improve driver (and cyclist) education, or provide better road designs to improve cyclists' safety. They can ignore pleas to install traffic-calming infrastructure, or pass 3-foot passing laws, or pass enforceable bans on texting while driving. That way, if a cyclist gets killed, they can trot out the old standbys that pass the blame onto the cyclist and away from the driver. We've all heard/read "victim wasn't wearing a helmet." Get ready for "victim wasn't coated in reflective paint" or "wasn't carrying a radar-reflective dish to make sure the car could see him."

Pardon the momentary diversion - but these both came to mind and seemed relevant:

I don't want to come down too hard on the radar-enhancer. Like I said, it's an interesting idea. I just wish like hell it weren't necessary.
Posted by Brooks at 12:53 PM