Winter Commuting - Not for the Faint of Heart

Regular bicycle commuters are well familiar with the astonishment and disbelief that almost always comes with telling people "I ride my bike to work."

Now just imagine the reactions that follow when you tell people you ride through the winter, too. You'll discover that many suddenly go from regarding you as a harmless curiosity to questioning your sanity -- at least if you live in northern climes.

There was a time in my adult or near-adult life when I generally did not ride if the temperature dipped into the 40s or lower. I can't believe I considered myself a dedicated cyclist in those days. Looking back on my life though, I realized that when I was a kid with a newspaper route, from the ages of about 8 or 9 through 14, I rode my bike to deliver the papers nearly year round. I often rode when snow was falling (and I took a number of spills when my tires hit icy patches). Only when the roads were so choked with snow and ice that they became truly unrideable did I leave the bike at home and go out on foot. Was it simply because I didn't have the option of driving?

Over the years, I've used my bike for commuting off and on, but it was overwhelmingly a "fair weather" prospect. For the past 4 - 5 years, I've been trying to ride to work more or less year round. When I started with that renewed dedication back in 2012, I remember people asking me "How long do you think you'll keep this up?" Although I suppose I could have interpreted a question like that as a disparagement on my mental status, I always assumed that they meant how long would I ride before it got too cold for me. At the time, I remember thinking that I really didn't know the answer. At first, I thought I'd probably be able to ride until temps dipped below 40. Well, 40 degree mornings came and went, and before I knew it, I was riding in the upper 30s. One morning, I'd feel the chill more than was comfortable, but then next time, I'd put on an extra layer, or buy a warmer jersey, or some warmer gloves, and soon my new "limit" was 35 - then 30 - and so on. Eventually, I settled on 20 degrees as my bottom limit.

For the past couple of years, my best cold weather gear consisted of an insulated base layer top with a fleece insulated jersey, and a nice soft-shell type of cold weather jacket. My warmest tights were/are Pearl Izumi AmFib tights which are thickly insulated, and have wind-stopping barrier material on all the front panels. My warmest gloves were a 2-part combination of a liner glove with a thicker "shell" glove on the outside. Thick wool socks on my feet, and neoprene/fleece overboots over my touring-type shoes were how I kept my feet warm. With all that gear, I was good down to about 20, but at that limit, I would still start to feel the cold creeping uncomfortably by the end of my commute - starting with fingers and toes. I know people who ride even colder than that, but I figured that 20 degrees was cold enough and wasn't going to feel bad about it.

I knew I could extend my limit by trying out battery-powered warming socks or gloves, but I really have no interest in that -- diminishing returns and all. I know people who have used and swear by winter riding boots, like those by 45Nrth - but all of them seem to require either an SPD or 3-bolt cleat, and I really prefer the versatility of old-school toe-clip pedals. Yes, I could put clipless pedals on my bike for the winter, but the way I see it, that just introduces more compatibility issues that I'd prefer to avoid. I have a pair of shoes that works on just about any bike I have, and I like that simplicity.

This winter, I replaced a few articles, and picked up a few new items to add to my winter arsenal, and the result is that have found I could lower my limit a little further. One item that I've already mentioned here was the pair of Pearl Izumi softshell pants. While the pants alone are good down into the upper 30s, the thing that really sold me on them was the possibility that I could easily layer them over another pair of tights without restricting my movement. The very bottom limit on the AmFib tights is just about 20 degrees, but I figured the softshell pants could extend that comfortably. 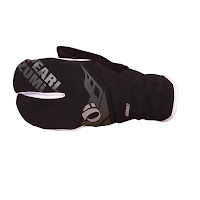 I also decided to try a pair of lobster-type gloves. If you've never tried them, lobster gloves are like a cross between a glove and a mitten. Fingers are paired up, which helps conserve heat, but the gloves still allow some dexterity for shifting and braking that one wouldn't get with regular mittens. Granted, they do make it impossible to use the most important finger for riding (guess which one) but I found that my fingers stay warm right to the end of my commute, with no hint of cold creeping in. In fact, in temperatures in the upper 20s, I almost found the lobster gloves to be too warm. 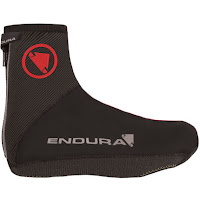 On my feet, my previous pair of neoprene overshoes were starting to wear out around the sole, so I went to replace them. My local shop was carrying a new line, Endura, and they had a very robust-looking pair of overshoes called "Freezing Point." A little thicker, with more fleece, and more substantial, they seemed like they would be worth trying out. The size guide on the tag said that I should be able to use the "large" size with my size 44 shoes, but I found that the "extra large" was much easier to put on without being loose or overly bulky. Even with the thick neoprene and fleece overshoes, I have not had any difficulty getting my feet into my old-school toe clip pedals. Also, the overshoes would work with cleated shoes, but also work just fine with my cleatless touring shoes. One of the things I like about overshoes as opposed to dedicated boots is the versatility. Weather in the morning can be very different from weather in the afternoon for the ride home, and there are plenty of days where I'd need the extra warmth in the morning, but am very glad to be able to leave the overshoes off in the afternoon and just pack them into one of my panniers.

The other day, the early morning temperature was only about 13 degrees, but otherwise it seemed like a good day to ride. I suited up with some of my new finds, and was pleased to discover that I was comfortable for the entire commute. My fingers in the lobster gloves stayed warm all the way to work. With the thickest wool socks I can fit into my shoes and the Endura overshoes, my toes never felt the chill. My legs were warm without overheating, and without the constriction I've encountered when trying to double up on tights. I added a lightweight windshell over my insulated softshell jacket, and was plenty warm enough in the upper body. A thin skull-cap under a fleece balaclava kept my head and face warm, and still fit inside my helmet.  I feel pretty confident that I can now lower my limit to somewhere near 10 degrees!

One other thing to mention about our winters:

Living in Northeast Ohio, I grew up often hearing this old joke. "Don't like the weather here? Wait a couple of hours." Well, the joke is true. I remember once on an early spring day having lunch at a little restaurant which happened to be across the street from a bank that had one of those time/temperature signs out front. As I sat there eating, I watched while the sign cycled from time to temperature and back again. With each minute that flashed on the screen, the temperature dropped one degree. Over the course of 15 minutes, the temperature dropped a full 15 degrees! Unbelieveable (but true!). Anyhow, this past weekend, we had temperatures in the low single digits. Monday was in the teens with a mix of clouds and sun in the afternoon. Tuesday started out with snow that turned to freezing rain, then was just regular rain in the afternoon when the temperature got up to nearly 40. Wednesday started out with everything coated in a layer of ice (I rode anyhow, but had some spooky experiences), and was up to 50 degrees by afternoon. Today its in the 50s but pouring non-stop heavy rain. Friday promises to be sunny but cold - back in the 20s. Predictions for next week seem to be just as ridiculous.

Through it all, I still hope to be able to at least ride a day or two each week.
Posted by Brooks at 12:54 PM