Today is the 50th anniversary of the tragic death of Tom Simpson.

Simpson was the first British rider to wear the rainbow stripes of the World Champion (1965) and a Yellow Jersey in the Tour de France, and on July 13, 1967, he died on the side of the road about a kilometer from the summit of Mount Ventoux. 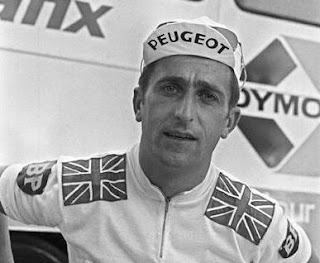 People often describe the barren upper slopes of Mount Ventoux as a "lunar landscape." At just over 1,900 meters, it is not the highest peak ridden in the Tour, but the ascent starts near sea level, so it's a long one with no relief - and it's an unforgiving climb as the last six kilometers have no shelter from the sun or the wind.

As that TdF began, Simpson was the leader of the British team (in 1967, the Tour was being raced with national teams) and leading up to the 13th stage he was in a respectable 7th place overall. He had been as high as 6th in the GC, but as the race hit the Alps, Simpson began battling stomach ailments. Unable to keep food down, he was running down his reserves. 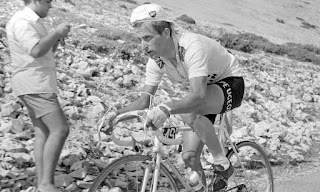 For the 13th stage, on July 13th, Simpson was under pressure for a strong result as the race climbed up Mount Ventoux. In the first part of the stage, Simpson kept himself with the leaders, but in the heat and as the road neared the summit, he began to lose contact with the lead group. Witnesses saw him weaving back and forth across the road, and about a kilometer or two from the summit, he fell off the bike. At that point, his team manager Alec Taylor and mechanic Harry Hall were prepared to help Simpson into the team car and call it quits, but reportedly Simpson insisted on continuing. Regrettably, they helped him back on the bike, but he collapsed again within the kilometer, with his hands gripped tightly to the bars. He could not be revived. Flown by helicopter to a hospital in Avignon, he was pronounced dead soon after.

Sadly, a post mortem exam showed that Simpson had a combination of amphetamines and alcohol in his system - the combination probably allowing the racer to ride well beyond his physical limits and shutting off the normal "warning signs." Ultimately, he rode deep into exhaustion under the hot sun and his body simply shut down.

Simpson's death was a wake-up call to the sport as far as doping is concerned - or at least it should have been - but unfortunately it was a call that has been ignored again and again. Yes, race organizers would begin instituting doping controls, but such efforts have never been as intense as the efforts to thwart them.

This year's Tour de France does not pass the memorial to Tom Simpson, and it's a sad thing that the organizers chose to ignore an opportunity to fully honor not only the memory of Simpson but also acknowledge the tragic legacy he left behind.

There is a BBC documentary on the life of Tom Simpson ready for viewing on YouTube - but I have linked here to the final segment which focuses on that fateful day that happened 50 years ago today: