The vintage and classic bicycle world lost a good friend this week. Jon Williams, whom some may know through his Drillium Revival work, died suddenly of a heart attack while riding his bike Wednesday. I don't know exactly how old Jon was, but he was young enough that his sudden death comes as a real shock. Jon had really built a name for himself with the vintage cycling crowd for his creativity and taste in modifying bicycle components.

I won't go into a lot of clichés about how a man's death reminds us to live every day like it could be our last. And I can't give a lot of biographical info about Jon. He was a friend and regular contributor to the discussions on the Classic Rendezvous group, and I have exchanged a few emails with him over the years, but we never actually met face to face, and I can't say that I really knew him personally. But like a lot of people, I did admire his work and had thought about having him drill and modify some components for my Mercian 753 Special - of all the bikes I own, that one seemed like it would have been the one for which some tastefully lightened parts would have been the most appropriate. Now I really wish I'd gotten that done.

I mentioned Jon's work a few years ago in an article about drillium, and he had a lot of pictures of his work on Flickr. I don't know how long that account will remain available - but I'd like share a few of my favorites: 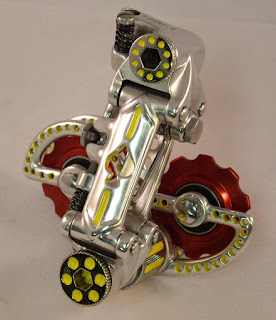 For those lucky enough to have examples of his work, Jon's artistry will be a lasting reminder of the talent that was lost this week.
Posted by Brooks at 9:19 AM