If you were riding good lightweight multi-speed bikes (or ten-speeds, as we called them) back in the 1970s or '80s, there's a good chance that a guy named Ben Lawee had some connection to the bike you were riding. Lawee was an importer of a lot of popular brands from the bike boom of the '70s, up through the early '90s, and he took an active role in designing or spec'ing many of the bikes he sold. He had a good eye for quality and a good read on the marketplace. 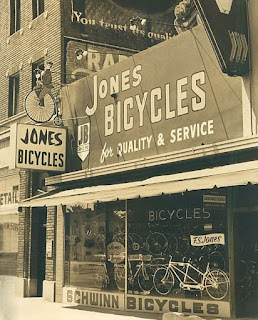 According to several sources, Lawee was born in Iraq in 1926 and took a cargo ship to the US while still in his teens. He went to Columbia University in New York before moving to the West Coast as a sales representative for Joannou Cycles. That was Lawee's introduction to the bike business, and in 1959 he bought the Jones Bicycle Shop in Long Beach from its founder and namesake, Frank Jones. That shop had originally opened in 1910, and Lawee expanded the single shop into a multi-store chain. Though eventually sold off to other owners, the last of the Jones shops just closed in April of this year.

Some say that Lawee wasn't satisfied with the quality of bikes that were coming into the shop, so he got into the business of importing them himself. He imported Legnanos and Bianchis from Italy, Raleighs from Britain, and Motobecanes from France. His influence was probably greatest with Motobecane, for which he was the US distributor. Lawee helped make Motobecane one of the best production bikes coming out of France in the '70s. In a recent thread on the Classic Rendezvous group, many people who were in the bike biz back in that decade remember that the quality of Motobecanes -  brazing, alignment, paint, and component choices - was generally a step above the competition, and that probably had something to do with Lawee's influence. I recall reading in the blog from Velo Orange that Motobecanes were also a favorite of that company's founder, Chris Kulczycki. Many vintage cycling fans have fond memories of the brand's black, red, and gold color scheme, which is generally considered a true classic look. Under Lawee's guidance, Motobecane was also one of the early adopters of Japanese components which generally worked better than the more traditional European-sourced parts from the same period.

Early in the 1970s, Lawee created a new brand - Italvega (the name could be translated to something like "Italian star," but the catalogs said "The brightest star of Italy"). The frames were built in Padua, Italy by the Torresini shop, with components picked by Lawee. Torresini was the same shop that built the Torpado brand (that name roughly comes from abbreviating TOResini PADua). Italvegas have a fairly small but devoted following, as the bikes were nicely made and equipped, but most models generally don't command super high values in the vintage market, so they can be great bargains.

By the end of the '70s, Lawee moved his Italvega production to Japan, and at that point the name was changed to Univega. Most Univegas were built by Miyata, at least through the earlier half of the 1980s, but specifications were generally picked by Lawee to distinguish them somewhat from Miyata models. Some time in the mid '80s production started to move to Taiwan, but the earlier Miyata-built bikes are generally more desirable.

Ben Lawee's impact on mountain biking often gets overlooked, but he truly deserves a share of the honors for introducing inexpensive (under $1000) production mountain bikes. Along with Specialized's Mike Sinyard, Lawee saw the appeal and market potential of mountain bikes fairly early on. In the same year that Specialized introduced the original Stumpjumper (priced around $850), Univega introduced the Alpina Sport (priced around $650, maybe less).

Although Italvega production moved to Asia and became Univega, Lawee took another stab at Italian-built bikes with the Bertoni brand beginning around 1980. It's a little unclear what shop actually built the frames. I've read posts on some of the forums online that the Bertoni bicycles were built by Bianchi, but I don't necessarily believe that is true. Build details on most Bertonis that I've seen - such as the seat-stay/seat-cluster area - don't match up at all with Bianchis from that era. More than likely, those claims stem from the fact that Lawee had previously been a Bianchi importer. I'd say it's possible that the bikes were sourced from a couple of different contract-building shops, depending on the year or the model. BMZ/Biemmezeta is one such shop that comes to mind. Billato is another possibility - but in any case, I'm just taking some guesses. At least one model was almost identical to one from Daccordi, while another had an aluminum frame that was pretty clearly built by the same shop that built Vitus aluminum frames (which were marketed under numerous brand names).

So, how does this story end?

Ben Lawee retired from the bike business in 1996 at age 70 when he sold Univega to Derby Cycles, the parent company that also owns Raleigh. As far as I can find, the brand is no longer available in the U.S., but it is still active in Europe and the U.K. The current Univega website mentions Lawee in their "History" page, but they incorrectly claim that he started Univega in the early '70s without mentioning that the brand actually started out as Italvega. Lawee died from stomach cancer in 2002, but his influence on the bike industry is worth remembering.
Posted by Brooks at 12:49 PM