In a short space of time since the loss of framebuilder Roland Della Santa, the cycling world has lost another of the great ones. Framebuilding legend Bruce Gordon died in his home on Friday, June 7th. This was just barely more than a year after he officially retired from the bike business. 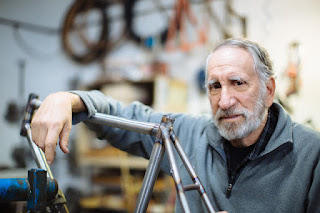 Gordon got started building frames in the 1970s, learning at the side of no less a legend than Albert Eisentraut. He became a part of a well-known and vibrant Northern California/San Francisco Bay area bike scene, though he also spent a few years in Oregon. He was an artist, a craftsman and an innovator. He built bikes of all types, but may have been best known for touring bikes, for which he also made unique and beautiful custom components and racks that were fully integrated into his bikes. He also designed and marketed items such as racks and tires for general sale. His "Rock 'n Road" tires probably helped kick off a trend towards "29er" mountain bikes.

Gordon had developed a reputation for being somewhat gruff - a "curmudgeon" - not exactly a "people person." Too innovative, perhaps, to be properly called a "retrogrouch" (though he mainly worked in lugs and steel), I'm pretty sure some may have referred to him as a grouch, at the very least. I never met him - though I wish I had. I have a feeling we'd have gotten along fine. And he knew the reputation. He even poked fun at it - at one point handing out buttons at trade shows that said "Bruce Gordon Was Rude To Me."

Given his wry sense of humor, he also liked to mess around with people's expectations. In subsequent years, he had new buttons made: 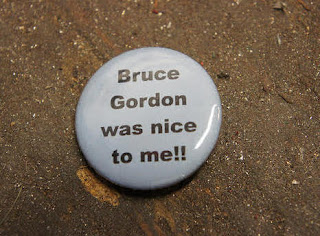 He was also known as a co-founder of the Society of People Who Actually Make Their Own S#!t, or SOPWAMTOS, which was sort of a tongue-in-cheek reaction against soulless automation, mass production, and marketing. They would hold parades and give awards at shows like Interbike, or the North American Handmade Bike Show. The "awards" tended to poke fun at the bike industry, and were probably not the kinds of awards that were prized by their recipients. The "trophies" were gold-painted toilet seats, and prizes were given for things like "Excellence in Litigation" or "Rip-Off and Duplicate" (both apparently "won" by Specialized). Some of that gets covered in a really interesting interview that appeared in BikeRumor the day after Gordon's death.

Sad to say, I am afraid Gordon may not have been particularly happy in his brief retirement. Looking at the posts on his blog from the past year (which he did continue updating up through May of this year), among posts about a SOPWAMTOS party at this year's NAHBS, and a trip to France, there was also this one from February:

"It has been over a Year since I quit the shop in February 1st 2018. I miss my machines and making stuff. It has been almost 3 years since I rode a Bicycle (my sense of balance is gone). I really miss riding my Rock 'n Road . . . I guess I will live the rest of my life through the pictures of other people riding through the glorious countryside and my memories."

Bruce Gordon was a complex man. Many would say he was hard to get to know, and some would say he pissed people off - but he was remembered by others as a warm and humorous man. His work as a bicycle builder showed him to be someone who strove for perfection. His bicycles will speak for him long after he's gone. 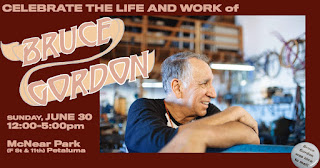 For those who are in the Bay Area, there will be a memorial gathering, or life and work celebration, for Bruce on June 30th in Petaluma.
Posted by Brooks at 12:43 PM