Nashbar and Performance - The Changing Face of Bicycle Retail 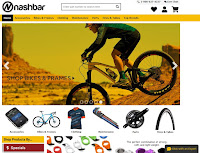 If you've visited either the Bike Nashbar or the Performance websites lately, you've probably noticed that they've gone through some changes. You might even notice that, apart from the names, they're virtually the same site. Well, it turns out that basically they are. The last year or so has brought pretty big transformations to the two famous mail/internet bicycle shops - including Chapter 11 bankruptcy, closed stores and warehouses, and a complete consolidation of brands.

It's all an interesting twist in a story about the rapidly changing nature of retail shopping. Both Nashbar and Performance have been such a fixture for me since I first got interested in cycling - and I'll bet many people can say the same.

Bike Nashbar got started in 1974, though at the time it was known as Bike Warehouse. Arni Nashbar, an advertising man from New Middletown, Ohio (near Youngstown) started up the mail order bike shop out of his home with about $1000 of his savings. His idea was to keep the costs of doing business as low as possible, and thereby keep the prices of goods lower than the competition. One way to keep the costs down was with his catalog. Cyclists of my generation probably remember well the old Bike Warehouse/Nashbar ads and catalogs with their simple black and white hand-drawn pictures. They were decidedly a low-budget affair. As I understand it, Arni either didn't want to pay extra for reproducing actual photographs of the products for his catalog, or didn't have a good means to do so (perhaps both) so he put the manufacturers' own product photos on a light table and traced them by hand. Combined with the pulpy newsprint type of paper they were printed on, the overall look and feel lent the catalogs an old-fashioned "homey" or "folksy" charm. He continued to produce the catalogs that way at least through the 1980s. Eventually he had to give in to marketing pressure and "slicker" competition and start running full-color catalogs (I think it was in the '90s) but part of me missed the old style.

Arni Nashbar also specialized in buying up overstocks, discontinued items, closeouts, etc., and passing the savings on to the customer. Another element in making his catalog shop a price leader was to make deals directly with manufacturers, mostly in Asia (first Japan, later Taiwan and China) to produce goods with the Nashbar name, eliminating middlemen. The same factories that were producing bikes, components, clothing, and accessories for big well-known brands were producing items with the Nashbar name for a fraction of the price. Nashbar-branded items typically didn't have a lot of drool-factor, and I suppose image-obsessed cyclists turned their noses up - but in my experience, many of the products were as well-made as the more popular branded items but a little more "basic" and were a great value. I had several pairs of Nashbar's best-quality bib shorts that were easily my favorites - the lycra blend was thick and durable, the chamois was a good fit and feel (and machine washable) and they lasted for many many years, miles, and wash cycles. I would often reach for them before some popular-brand shorts that cost much more.

Many cyclists in Northeast Ohio and Western Pennsylvania probably share memories of an advantage to being nearby the company's Youngstown-area headquarters: the Bike Nashbar warehouse outlet store. It was a no-frills shopping experience, with tables and bins full of the things Nashbar was famous for: closeouts and overstocks - marked down to practically give-away prices. Also, the company had a very liberal return policy, so one could also get great deals on opened-box and returned goods (you had to check carefully that everything was in there!). When I was at Kent State University in the mid/late '80s, at least once or twice a year our bike club would rent a couple of 9-passenger vans and make the roughly hour-long pilgrimage to the Nashbar outlet to do some bargain hunting.

The origins of Performance Bicycle Shop are somewhat similar to the Nashbar story. In 1981, Gary Snook and his wife Sharon, from Chapel Hill, North Carolina, invested their savings into a catalog mail-order bike shop. The focus of Performance was to offer a wide selection of high quality bikes, parts, and accessories at low prices. The glossy, full-color catalog gave it more of an up-market look and feel as compared to Nashbar. I remember how getting those catalogs every few months was like getting a glitzy "wish book" - the feeling was not unlike being a little kid and getting the big Sears and JCPenney catalogs at Christmas time. "I want this, and that, and those, and . . ."

Performance, like Nashbar, also contracted with manufacturers in Italy and in Asia to produce bikes, components, and accessories with their own name on them. In the mid '80s, they offered some really lovely Italian frames, built of Columbus SL tubing, and made in the same shop that also contract-built for more famous brands. Again, the quality of their products was very good, but typically cheaper than the better-known brands. Performance also opened a nationwide chain of full-service storefronts, so they had not only the mail-order business, but also a presence on the street. That was an interesting twist, considering that many brick-and-mortar shops were probably driven under by the company to the point where there were probably a lot of places where Performance was the only physical bike shop in town.

Both Performance and Nashbar, along with the other mail-order shops, took a lot of criticism for undercutting brick-and-mortar bike shops. It was a fair criticism. With low overhead, volume buying, and eliminating some of the distribution layers, they were often able to sell goods for less than the traditional shops could buy them. Another source of irritation was that some shoppers would engage in "showrooming" - essentially using the bike shop as a place to try on shoes, helmets, etc., only to buy them for less from the catalog shops. Both of these issues have only gotten worse in the internet age - and in fact, those same changing trends, and an increase in internet shopping choices, eventually worked against Performance and Nashbar, as internet competition has re-shuffled the industry even further.

In 2000, Performance bought Nashbar (and another competitor, Supergo, if I recall correctly), but the two companies were still run as more-or-less independent entities. Both brands continued offering bicycles, components, clothing, and accessories with their own names on them, but Nashbar continued to put more of a focus on value pricing, deep discounts, closeouts, etc., while the Performance brand focused more on having a range of leading brands, and continued to have a more upscale image.

The current state of affairs started in 2016. Performance had accumulated a lot of debt to Advanced Sports International (ASI) which owned and distributed several popular bike brands, including Fuji, SE, Breezer, and Kestrel. The result was that ASI ended up buying Performance. A new company - Advanced Sports Enterprises (ASE) - was formed to manage both the internet shopping brands and the bicycle brands, and that takes us back to the beginning of this story.

Unfortunately, the purchase of Performance didn't stop the losses or solve the debt issues. ASE, the parent company that controlled both Nashbar and Performance, along with those aforementioned bicycle brands, filed for bankruptcy last year, and different parts of the company were divided up between different investors. One investment group, Tiger Capital, took over the bicycle brands, while another, AMain Cycling, became the new owners of the popular online retailers. AMain consolidated the Nashbar and Performance retail operations, and as a result, Nashbar's Ohio warehouse was shut down, and all the Performance brick-and-mortar storefronts were closed, offices shuttered, and most if not all employees let go. Both websites became little more than mirror images of one another, offering the same products, which now all ship from the same warehouse facility. (I'm hearing from good sources that some of the bike brands may be totally gone. Whatever future they have is uncertain.)

The store closings probably mean that there may be some towns that have lost their only full-service bike shop, and it goes without saying that a lot of folks are out of jobs. And as often happens with bankruptcy, creditors and suppliers are left holding an empty bag. It's a little ironic that many people pointed to the mail order bike shops as contributing to the failure of full-service brick-and-mortar bike shops a decade or more ago - and then further shifts in shopping trends ended up killing Performance and Nashbar in return. There's so much competition on the internet - and nowadays the competition is global. Sometimes one can find products sold from Europe or the UK shipping directly to customers in the US at prices (including shipping) that can't be beaten even by American-based discounters.

All in all, it's kind of a sad twist that demonstrates the volatile nature of retail. It makes me wonder what changes we'll see in the future, and what it will take for bicycle retailers to survive.
Posted by Brooks at 8:43 PM