I've long been a fan of the comic strip "Frazz," by Jef Mallett. Mallett is an avid cyclist (and very competitive triathlete, if I recall correctly) and he frequently works bicycling into his comic strip. The main character of the comic, Frazz, is the custodian at an elementary school, who happens to be a fount of knowledge, wisdom, and experience - and like the strip's creator, is also an avid cyclist.

Mallett's comic strip often incorporates bicycle-related content (and it's notable that Mallett is one of the few comic strip artists who can actually draw a bicycle accurately). I had the pleasure to meet him once and get him to sign a copy of a book that he had illustrated, Tales from the Bike Shop by Maynard Hershon.

So, I was thrilled to see his comic strip for Sunday, July 11, and had to share it here: 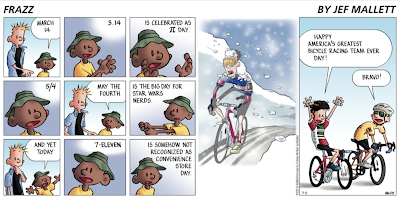 That's right - Mallett cleverly makes the case that July 11th - or "7/11" should be a day to honor the 7-Eleven bicycle racing team.

Two fun things to note in the strip:

One: The depiction of Andy Hampsten riding the Gavia Pass in the 1988 Giro d'Italia - in which he became the only American to ever win that race. 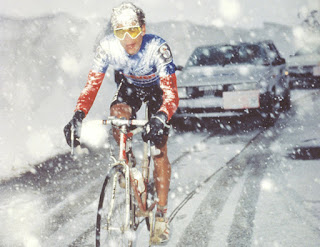 Two: Frazz is wearing the iconic red/green/white 7-Eleven team jersey in the final panel of the strip.

I just need to applaud Mallett - and agree with Frazz. July 11th - or "7/11" should indeed be the day we cyclists honor the greatest American racing team.