I realize that the film was actually released a couple of years ago, but I only just recently got a chance to watch Cheetah: The Nelson Vails Story, which can now be seen on YouTube. It seemed like a fine idea after observing Martin Luther King's day to watch a film about the first African-American to win an Olympic medal in cycling.

Born and raised in Harlem, Vails was the youngest of 11 children. Surrounded by basketball in his neighborhood, Nelson set himself apart in pursuing cycling in his youth, despite the fact that it was generally considered a "White" sport. Okay - never mind that America's first World Champion cyclist was a Black athlete named Major Taylor. By the 1970s, few people knew or remembered Taylor's name. A big part of the legend of Nelson Vails was how he worked for a time as a bike messenger in New York City, and turned his talents to racing. Earning a living as a messenger meant riding hard in all kinds of weather in order to make more deliveries, and more deliveries meant more money. Vails developed a powerful build, with massive thighs, which made him perfect for track events like the Match Sprints in which he was champion. 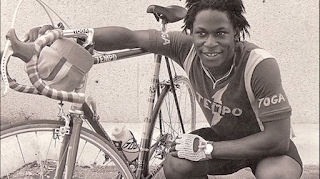 The film mainly documents Nelson's rise from his childhood in Harlem and up through the bicycle racing scene, and culminates with his performance in the 1984 Olympics where he took the Silver medal in a close race with fellow American sprinter Mark Gorski. Their Gold and Silver matchup was one of the highlights of the Los Angeles games -- and along with a similar Gold and Silver victory between Connie Carpenter and Rebecca Twigg in the Women's Road Race, marked a new birth for bicycle racing in the U.S. 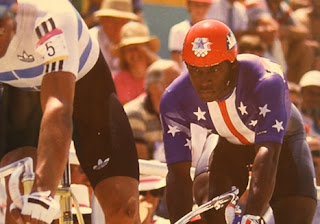 After the Olympics, Vails became a huge celebrity - even more than the Gold Medal-winning Gorski. His humor, style, dynamic personality, and colorful backstory made him a natural in the spotlight, and he was flooded with sponsorships and endorsement deals, magazine articles, photo shoots, and television appearances in the following years. He also earned a fairly successful living as a professional racer, racing all around Europe, and later on the Keirin racing circuit in Japan. While that career is mentioned, it is only briefly, and I can't help but think there must be more to know.

Much of the story is told through personal interviews with Nelson Vails, along with his childhood friends and family - many of whom describe Nelson as a "spoiled" child (in the most affectionate way possible) and something of a family favorite. Other notable interviews include such people as Women's National Team cyclist Connie Paraskevin, former USCF President Mike Fraysse, former U.S. National Team Coach Eddie Borysewicz, and an extensive interview with friend and competitor Mark Gorski. The Olympic matchup between Gorski and Vails gets a full replay in the documentary, with commentary and descriptions on the action from both men. It's a moving scene when Vails describes that Gorski simply "out-pedalled me that day" and that the real victory was that his dad was able to see him on the podium. 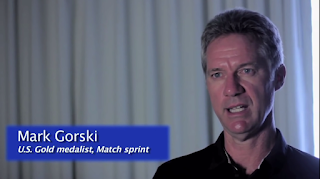 If there is a weakness in the film, I'd say it's that the film leaves out what could be some really compelling information. As already mentioned, I'd like to know more about his professional racing career after the Olympics. I've heard that Vails made himself learn several European languages to be successful in that continent's racing scene. For another thing, it is implied in the film that Vails became fairly wealthy after the Olympics, but that he lost that wealth in subsequent years. Nelson mentions that like a lot of young successful professional athletes, he didn't really learn how to manage his money. But there must be more to the story. Also, the film doesn't really make it clear what Vails is doing today apart from making appearances at various races and charity rides.

One other thing that bugged me as I watched the film was a lack of professionalism in the production. I'm not criticizing the fact that this was likely a film with a limited production budget. I get that. But there are shortcuts and mistakes that are so avoidable regardless of the budget. There are many still-frame photos used in the film, but it's clear that a number of the photos were simply ripped from the internet, and they suffer from the pixelated low resolution that one often finds when they just snatch photos off a Google Images search, taking the first images that pop up. Even if sourcing photos from the internet, there isn't much excuse for not taking a little extra time to get the best quality photos available. What may be worse than the quality of some of the ripped images is the fact that the sources are not ever cited. But the worst gaffe of all is the misspellings of prominent names:

On the whole, I enjoyed the documentary. It was great to catch up a little with such a great rider and celebrity from the past. Nelson Vails' success story of poor kid from the Harlem streets to Olympic medalist is so compelling on its own, but more than that, Vails comes across as such a kind and genuinely likeable person.

Wrapping it up - one thing that doesn't really get mentioned in the documentary is that it is NOT the first time Nelson Vails has been on a movie screen. Does anybody out there remember this?:


You can watch Cheetah: The Nelson Vails Story on YouTube - or right here:

And if you want to see that opening scene of Vails in Quicksilver, you can see that here, too: